After a few months where risk spreads were seen to have been increasing in the catastrophe bond and insurance-linked securities (ILS) market, on the back of a decline in ILS capital as well as an appetite for higher returns, it seems the market saw its risk spreads decline in June.

Catastrophe bond and more broadly ILS pricing has been on the rise throughout 2019, as investors sought higher returns from new issues after the market’s losses from catastrophes over the last two years.

Risk spreads were seen to increase dramatically, compared to previous years, which provided one of the first measurable signs of the improved reinsurance pricing to come at the April and mid-year renewal seasons.

The highest cat bond multiples at market were seen in February and March, after which they declined slightly into April and May, but have then declined again into June.

Partially, this reflects the types of transactions coming to market in recent months, as even though the market was demanding higher returns for U.S. wind risks, it remains the exposure that ILS funds and their investors are most comfortable underwriting and so the fact multiples were a little lower than seen in previous months where risks were more specialist is not surprising.

In a recent report, Willis Re Securities, the ILS focused arm of the reinsurance broker, explained that risk spreads for non-life risks had risen through April and May, but that June then saw them stabilising or even falling away slightly again.

This is evidenced within the catastrophe bond transaction data that we collect and display in charts and visualisations here at Artemis.

If we then look at the average multiple at market of new issues by month, we can see that this stood at just above 3x’s EL for February, then rose to as high as 3.85x’s EL for March, before dropping back to 2.54x’s EL in April, then rising to 2.75x’s EL for May, while June saw it decline slightly again to April’s level of 2.54x’s expected loss.

The chart below shows the average expected loss and coupon at issuance of all catastrophe bonds and related insurance-linked securities (ILS) from our Deal Directory on which we have the specific data points. 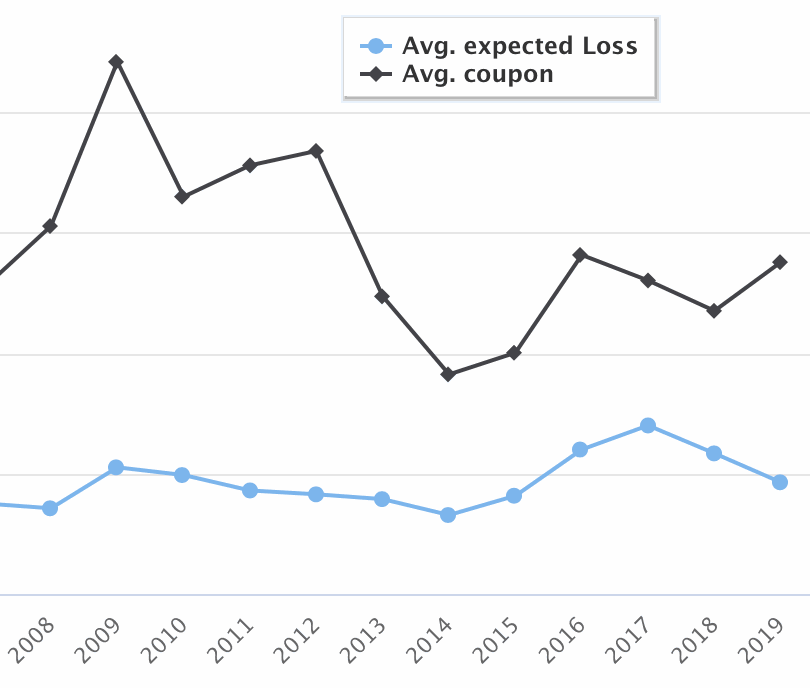 The average spread, or gap between average expected loss and average coupon for 2019’s issuance to-date sat at 4.57% at the beginning of June. But by the end of June and including all the issuance from that month, this risk spread above expected loss for 2019 so far had declined to 4.46% (still well up on the prior year).

Clearly the mix of issuance in any single month is largely responsible for these changes. But when viewed along with the spread, or excess return above expected loss, of the cat bond coupon’s at issuance, a clearer trend is perhaps seen.

Given the types of issuances it’s best to only look at May and June here, given the similarities of the issued cat bonds and the time of year with placements being made for the mid-year reinsurance renewals.

The average spread above EL was 4.3% for May 2019, but then dropped back to 3.74% for June 2019, according to Artemis’ cat bond data, reflecting the situation observed by Willis Re Securities.

If you look at issuance from February, when the non-life cat bonds began to come to market in 2019, and apply some maths to make issuance risk levels more comparable, we see that the average spread or excess coupon return above expected loss appears to have risen through April and peaked in May, before tailing off slightly in June.

This could just be due to the more commoditised nature of some of the risks issued in cat bonds this June, as well as ILS investors greater familiarity with them.

It could also be as there were more pricing signals available from the traditional reinsurance market to inform both dealmakers and investors pricing appetites for transactions issued during the month.

Further evidence was available from the secondary market, where buying interest has helped to bring down spreads somewhat. This helped secondary prices to recover somewhat, having been depressed a little through some of Q2 and has also been reflected in new issues in June, helping to reduce the spread at market it seems.

Bill Dubinsky, Managing Director, Head of Insurance-Linked Securities at Willis Re Securities, confirmed this to us explaining, “We are gradually seeing more buying interest in the secondary market reflecting a variety of factors including net inflows to selected managers and greater confidence in market levels on the back of the important 6/1 Florida renewals.

“This buying interest has also been reflected in June new issues.”

Quite whether these lower risk spreads are set to continue, or reflect a peak in cat bond issuance pricing having been reached, is uncertain.

We believe it’s possible more a reflection of the nature of the risks featured in cat bond deals, along with the timing being just after the June reinsurance renewals meaning that greater visibility of price marks had been gained by the market at that time.

It’s going to be interesting to see how pricing settles on new issues that come to market through the coming months and whether pricing gains can be sustained into the end of the year.

You can read all about second-quarter 2019 catastrophe bond issuance in our latest quarter cat bond and related ILS market report.