Record catastrophe bond fund returns have helped to drive the average performance of ILS funds to 1.42% for September 2019, the highest ILS fund market return for one month in a decade. 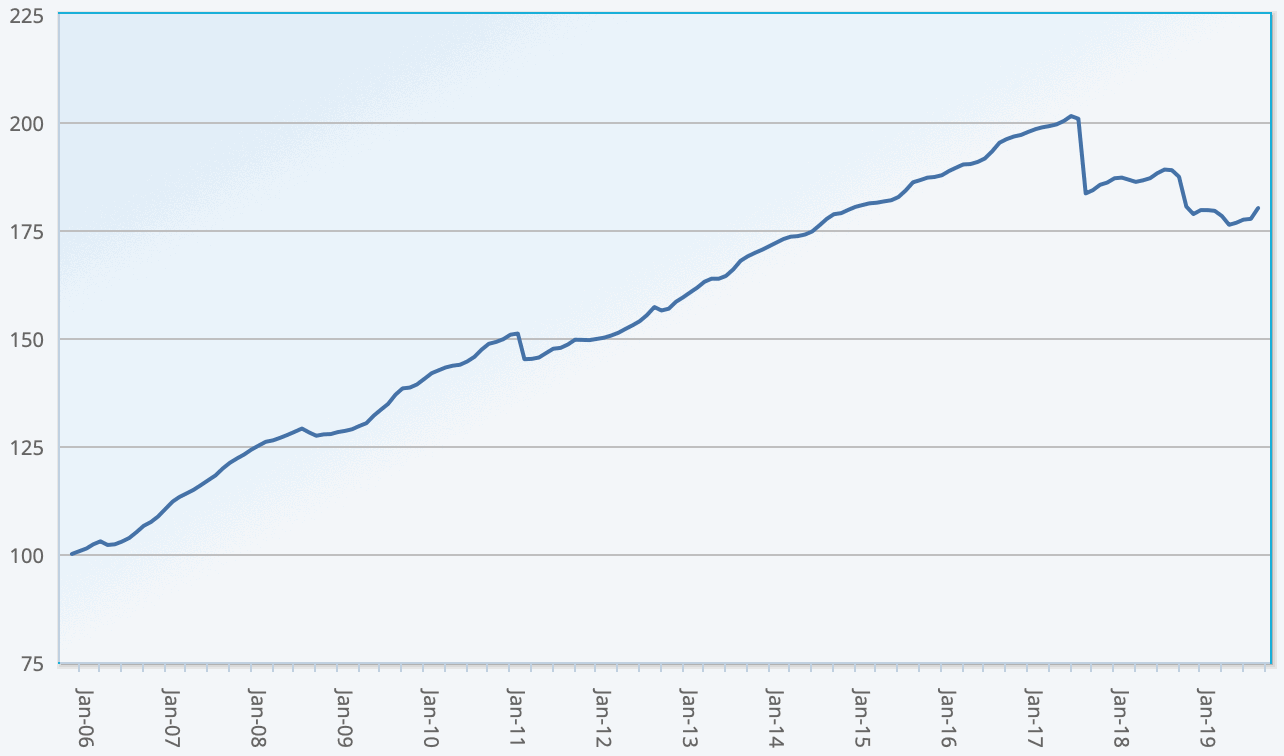 Catastrophe bond funds experienced a strong recovery of the mark-to-market impacts from hurricane Dorian in early September, driving record returns for some cat bond funds, as we previously explained.

As a result, the ILS and cat bond fund sector as tracked by the Eurekahedge ILS Advisers Index averaged an impressive return of 1.42% for September 2019.

It’s the fourth strongest monthly return for the ILS fund Index since ILS Advisers began tracking this data 14 years ago, far above the 14 year historical average for September of 0.24%, and the best monthly performance in a decade.

Year-to-date the ILS Advisers Index is now positive, with the average ILS fund return for the first-nine months of 2019 coming out at 0.79%.

31 of the now 33 ILS funds included in the ILS fund Index were positive for the month, with pure cat bond funds delivering the highest contribution at 1.79% as a group, while the subgroup of funds investing in private ILS and collateralised reinsurance were up by 1.15%.

Impressively, the biggest gainer for September 2019 was a pure cat bond fund that reported a 3.11% return, but the difference between this fund and the worst performer was again stark at 4.33%.

The reason for the cat bond fund outperformance in September was specifically hurricane Dorian’s timing.

As the hurricane looked set to barrel into Florida at the end of August, secondary pricing for many exposed cat bond positions plummeted and cat bond fund managers had to mark their end of month valuations to reflect this.

A few days later in early September it became clear that Dorian would miss Florida and barely scrape the state, so cat bond valuations recovered in the secondary market and it is this recovery that has now boosted September ILS fund returns.

ILS Advisers Founder Stefan Kräuchi explained, “In the beginning of September, Hurricane Dorian became the most intense tropical cyclone to strike the Bahamas when it made landfall at Elbow Cay on Abaco Island as a category 5 hurricane. The storm caused a big drawdown of the cat bond market as of the end of August. However, the storm later missed Florida, giving investors some relief and thus a very sizable rebound.”

Kräuchi cautioned on getting too excited about the bumper returns of September 2019, “September is a great month for ILS funds, but it’s more like an artificial one, because of the lower base in August. We still need to be cautious on the following months of the year, as we just experienced an even more damaging Japanese Typhoon Hagibis in early October and uncontained wildfires in California. For both Japanese typhoons, the loss estimates are still in the early stage but it’s believed that cedents became more conservative in loss reserving given the lessons learnt from Jebi last year.”

Encouragingly, September 2019 saw only two of the 33 constituent ILS funds reporting a negative return, which is the fewest for eight months.

This could signal an increasing recovery from prior year losses, but also signals that September’s loss events of hurricane Dorian and typhoon Faxai are perhaps not as impactful to ILS funds as they may have been expected to be.

Although it is worth being a little more cautious on the potential for Faxai to be factored into October, given the initial estimates were much lower for that storm than they now stand.

ILS Advisers reports that there was an ILS fund market impact from Faxai, with some private ILS funds collateralised reinsurance contracts suffering losses as a result of the storm.

In addition, hurricane Dorian did hit some ILS funds with collateralised reinsurance or retrocession exposure to the losses in the Bahamas, but this was not particularly significant.

Another factor of note in September was the fact that some ILS funds have been able to release some of the Jebi reserves, as the loss is increasingly stabilised.

Looking ahead to October’s results, ILS Advisers expects there will be some impact to ILS funds from typhoon Hagibis. It’s likely to largely be through collateralised reinsurance or retro positions, with little impact expected to the cat bond market.

Given the artificially high September returns thanks to the cat bond recovery from hurricane Dorian, October is likely to revert to more normal performance, where what we’ll be watching out for is whether the impact of typhoon Hagibis on private ILS funds is particularly significant, or not.

You can track the Eurekahedge ILS Advisers Index on Artemis here, including the USD hedged version of the index. It comprises an equally weighted index of 32 constituent insurance-linked investment funds which tracks their performance and is the first benchmark that allows a comparison between different insurance-linked securities fund managers in the ILS, reinsurance-linked and catastrophe bond investment space.