The catastrophe bond market only dipped by less than 1% on the threat of an approaching hurricane Dorian last week, data on the price return of the outstanding market shows.

Update, Sep 5th: Hurricane Dorian remains a strong hurricane. The U.S. coastline is not yet in the clear, as Dorian is forecast to hug it on the way north, with dangerous winds and storm surge expected and a chance of making landfall. Our latest here.

It’s a testament to the robustness of the catastrophe bond asset class, and the experience of the ILS and reinsurance focused investment managers commanding most of the outstanding stock of cat bonds, that prices of exposed positions did not decline further.

Hurricane Dorian had been threatening a major hit to Florida, which looked likely to result in at least some losses to the catastrophe bond market, last week.

But, despite the threat, prices of catastrophe bonds only fell roughly -0.80% it seems, according to data from the Swiss Re cat bond index on Bloomberg, closing out the month at 83.92 on Friday. 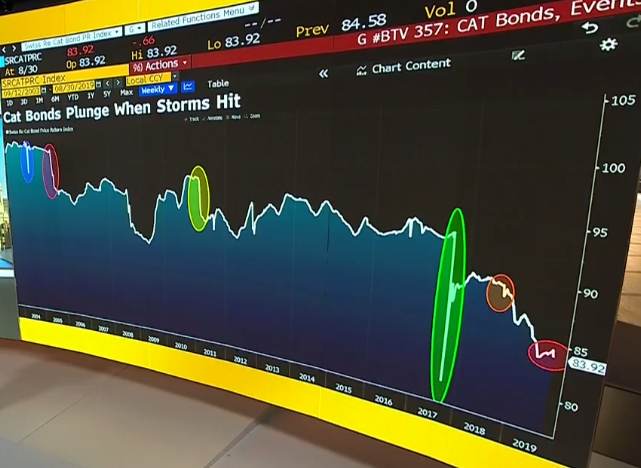 Looking at the chart above, screen grabbed from Bloomberg TV, the dip in cat bond market pricing has been significantly less pronounced for hurricane Dorian than was seen for other storms.

Compared to the dip highlighted in the above image in 2017 for hurricane Irma, the decline seen for hurricane Dorian is practically nothing.

It shows that cat bond funds and investors did not panic as hurricane Dorian approached at the end of last week, despite the forecasts showing a major Category 4 landfall in Florida.

Even though the industry loss estimates for the insurance and reinsurance market seemed like they could be significant enough to result in a serious threat being posed to at least a handful of cat bonds.

Although it is worth noting that the uncertainty in the forecast location and landfall, as well as the timing of the curve north, will also have meant that pricing did not decline much as sentiment was perhaps much more spread on the potential for catastrophe bond market losses.

Despite it being enough to stimulate at least some pre-landfall catastrophe bond trades last week, as we explained at the time.

Now, as the forecast has changed with every update over the weekend and the latest shows hurricane Dorian travelling further north along the coast without making a landfall in Florida, the outlook for cat bonds has improved and losses look less likely at this time (although uncertainty still reigns and a shift westward would change everything again).

As a result, as long as Dorian remains offshore any mark-to-market cat bond price declines should come back relatively quickly this week, if the latest forecast holds.

Dorian is still going to get very close to Florida, but forecasts suggest a glancing blow at best. Reducing the chances for major insurance and reinsurance market losses.

As we explained earlier, this could still cause some ILS and collateralised reinsurance market loss impact, but for cat bonds it is the major landfall that was the main threat it seems.

A closer look at the Swiss Re Cat Bond Index price return, via Bloomberg, can be seen below. 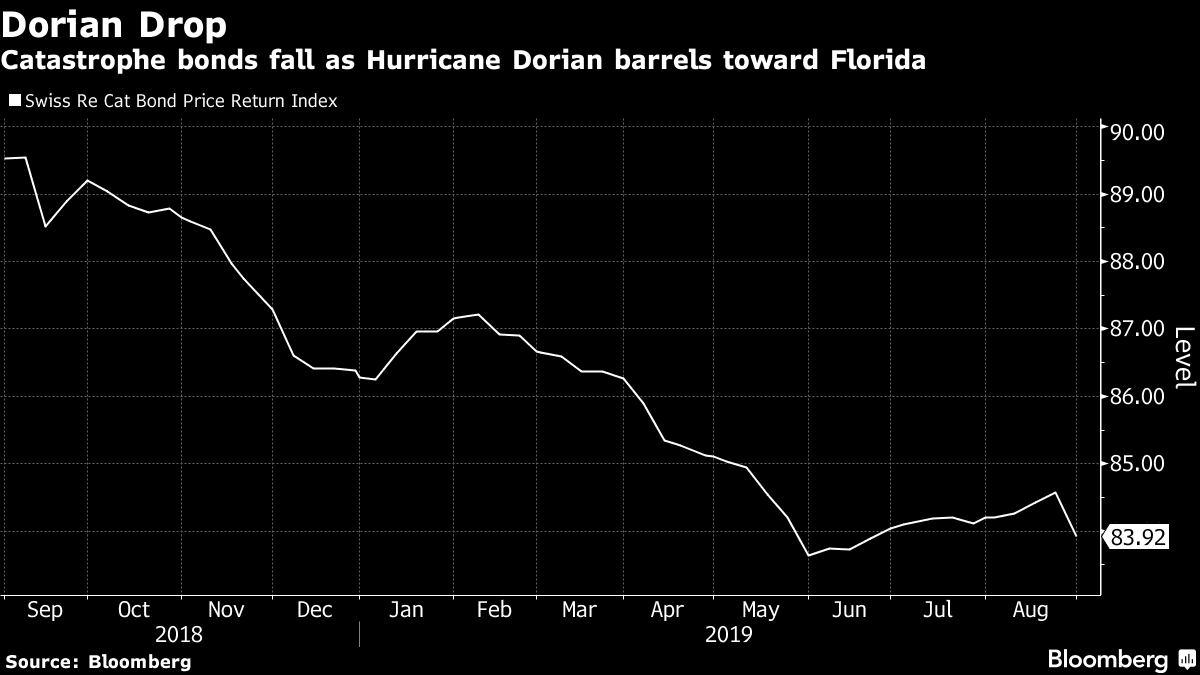