The tragic events in Brussels, Belgium this week, when more than 30 people were killed by terrorist bombings at the city’s airport and metro, are unlikely to result in significant insurance or reinsurance impact, but demonstrate the lack of coverage for the terrorism-related economic exposure.

According to risk modeller AIR Worldwide, the losses suffered from the attacks which have been claimed by so-called Islamic State (IS) will be covered by the Belgian Terrorism Reinsurance and Insurance Pool (TRIP), with little impact to the broader insurance and reinsurance market.

Loss of life and injuries to persons are expected to be the major cause of loss with property losses minimal, according to AIR. However, footage emerging from the airport and metro station does suggest a level of commercial property damage which could result in some claims seeping into the private re/insurance markets, but still minimal.

The Belgian Terrorism Reinsurance and Insurance Pool (TRIP) provides up to EUR 1 billion (approximately USD 1.12 billion) of cover, AIR explained, with participation not compulsory, but around 95% of insurers operating in Belgium contributing to it.

The TRIP terrorism pool’s EUR1 billion of cover features a EUR300m retention by the market, after which members provide a stop-loss reinsurance layer which was EUR400m in 2014 (EUR587m for 2014 following index-linking, which applies to the full layer reinsured by TRIP) followed by a state-backed EUR300m layer.

Aside from the tragic human toll caused by terrible events such as those seen in Brussels, it is the economic costs to the country, companies and industries operating there, the airport, the transport system, airlines, travel organisations and others which will largely be uninsured.

In fact a report released today by reinsurance and insurance brokers JLT Re and JLT Specialty Limited (JLT) explains that there is a terrorism insurance protection gap, as the evolving terror threat and rising complexity of these events and their impacts is increasing the economic cost.

Insurance and reinsurance is “absorbing only a fraction of the economic impacts that have followed recent terrorist attacks,” JLT explains.

The broker says that this is evidence that the insurance and reinsurance sector has been “Slow to respond to evolving risk dynamics and current products are not meeting the needs of corporations.”

Chris Holt, Head of Credit, Political & Security Risk Consulting at JLT Specialty, commented; “Terrorism has evolved into a more complex threat for businesses and insurers, with both attacks and fatalities seeing steep increases since 2011.

“But this isn’t just about an increase in activity. The rise of Islamic extremism, combined with the potential access to weapons, explosives and toxic materials, comes at a time when modern communications and technologies are being exploited by groups as recruitment tools, communication channels and potential attack vectors. This means today’s terrorist threat is more dynamic with impacts that are difficult to accurately predict.”

In 2014 the economic cost of global terror attacks hit $53 billion, which is a higher annual toll than seen in 2001, but at the same time the level of insurance and reinsurance coverage triggered has not increased dramatically above the norm. 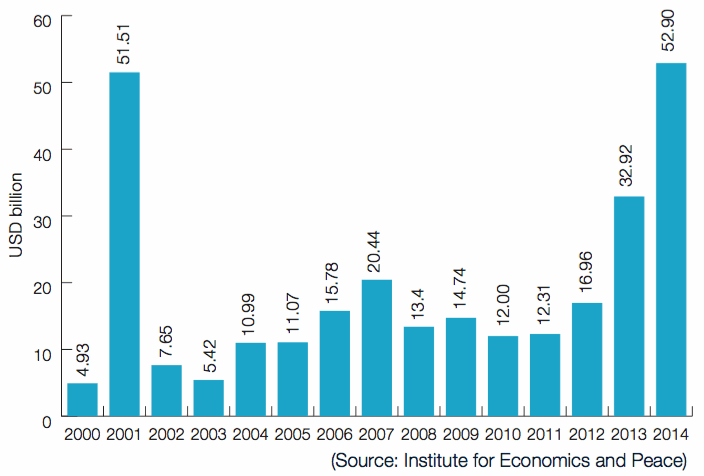 This suggests the need for a rethink of the terrorism insurance and reinsurance paradigm, with JLT suggesting that terror risk pools need to be restructured to focus on the risks that are difficult to model or systemic in nature, allowing the private market to focus on the property and commercial exposures that drive the economic losses.

“An optimal outcome would include the creation of new and comprehensive products that account for all potential terror-related impacts across several different coverages. Such solutions will require the support of reinsurers and insurers, along with meaningful input from industry and governments,” JLT explains.

A collaborative approach is required here, with capital markets support a must, JLT explains. The ILS market does underwrite a small amount of terrorism cover with some specialist ILS managers participating in a few contracts each year, but penetration of ILS capital into terror risks is low.

Currently there is an issue as reinsurance capital providers, including ILS players, avoid the risks which can result in major aggregations, such as chemical, biological, radiological and nuclear (CBRN) and cyber terror risks.

It is the lack of willingness and ability to cover these risks which holds back terror cover and ultimately results in the growing economic loss protection gap for this risk class. State pools should perhaps focus on removing these systemic terror risks from the equation, allowing private reinsurance and ILS markets to focus on risks that are more easily modelled and understood.

JLT explains; “Any long-term solution will realistically require the involvement of global terror pools as well as private risk carriers, with pools potentially taking on more systemic risks and the standalone market providing broadened coverage and new products to reflect the prevailing threat that exists today.

“Crucially, innovators are needed to devise new solutions which are able to keep pace with an ever changing terrorism threat.”

Events such as those in Belgium are a reminder that the world faces a threat which requires financial protection, and that the rising economic costs, while of course overshadowed by the terrible human toll, is an important gap that needs protecting to improve life and livelihood of global populations.

Terror risks are another area where risk capital is required, but in order to deploy it effectively a rethink of the market and product structure must come first.

JLT’s report can be download in PDF format here.

– Pool Re: No ILS or collateralised terror retro yet, but open to it.

– In TRIA’s absence no shortage of terrorism reinsurance capacity: S&P.