Atmospheric Rivers can add to re/insurance industry losses: JLT Re

Meteorologists from JLT Re North America have highlighted the potential for catastrophic flooding and intense drought conditions owing to the arrival or failure of Atmospheric River (AR) events, underlining the potential for increased insurance and reinsurance industry losses.

Lead Meteorologist at JLT Re North America, Josh Darr explains that “Atmospheric Rivers are a ‘freeway’ of moisture rich air that connects the tropics to mid-latitudes and while most AR events create beneficial rainfall, strong AR events can cause major flooding like the damaging events seen in the UK and India in December 2015.” 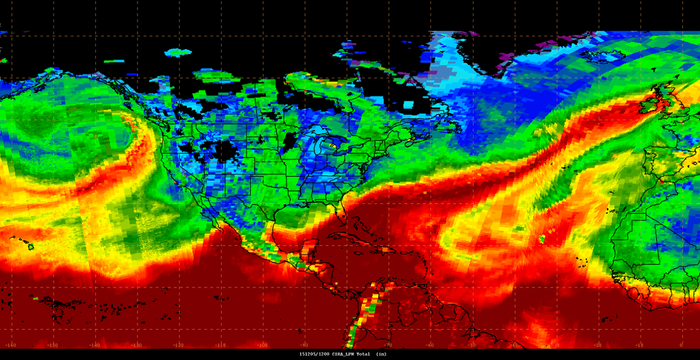 UK storms Desmond, Eva, and Frank brought widespread, intense rainfall and flooding to parts of the northern UK during December, with insurance and reinsurance industry loss estimates reaching as high as $3.7 billion.

And now, reinsurance broker JLT Re North America meteorologist Darr, and AVP/meteorologist Kimberly Roberts, have highlighted how the arrival, or the lack of an Atmospheric River event can dramatically change the potential for natural catastrophe occurrence and severity.

“Whether just a few large AR’s arrive or fail to arrive can be the difference between a banner year and a drought,” says Roberts, explaining the impact AR events can have on states like California.

As Roberts notes it isn’t just catastrophic flooding that AR events can contribute to. Regions like California that have seasonal wildfire expectancies can see potential losses from a given season rise as wildfires are closely connected to drought events, which can be influenced, or exacerbated by a lack of AR events.

In fact, Artemis reported earlier this year that the Valley and Blues wildfires in California during 2015 are now confirmed to have caused an insurance industry loss of $1 billion or more.

With the expectation that sea temperatures will continue to get warmer the potential for more intense AR events becomes apparent, suggesting greater economic, insurance and reinsurance industry losses from catastrophic flooding events caused by a landfalling, or resting AR event.

However, AR events contribute significantly to water supplies and are a primary feature of the global water cycle, underlined by the fact that on average, “30% – 50% of annual precipitation along the U.S. west coast states occurs in just a few AR events, thus contributing to water supply,” explains the National Oceanic & Atmospheric Administration’s (NOAA) Earth System Research Laboratory.

While the damage to insurers is somewhat clearer, it remains uncertain just how much of an impact the December UK flooding will have on reinsurance players and also potentially on some insurance-linked securities (ILS) funds and managers.

The droughts in California aren’t expected to hit reinsurers or ILS market participants as the bulk of losses will likely be borne by primary insurers. With the India flooding the story does differ somewhat, as a lack of insurance penetration means the majority of the $3 billion in losses won’t be covered at all, suggesting that the government will have to foot the bill.

“As theory expects moisture is increasing and has been observed over the past 40 years. Future projections of AR events indicate that average AR event intensity will not change.

“However, most extreme events in the future have a higher likelihood of being more intense than events we’ve seen in the historical record. When topography intersects slow moving AR events, potentially catastrophic flooding ensues,” said Darr.

Predictions from across the risk transfer landscape note a rise in the severity and frequency of extreme weather events in the future, and as asset values continue to increase along side the growing global population, re/insurance industry losses could rise also.

While the average AR event intensity isn’t expected to grow in the near future, climate change, global warming and other factors could lead to a rise in more unprecedented, severe events, which can really test the resolve of the insurance, reinsurance, and even ILS space.

The benefits to the global water supply AR events bring are clear and vital to the sustainability of certain regions, notably the U.S. west coast, but too much, or too little AR event activity can create substantial flooding or drought conditions, so the need to forecast the intensity and frequency is extremely important, and will continue to be so moving forward.