Atlantic hurricane season forecast for 25% above normal activity by TSR

The 2020 Atlantic hurricane season could see activity levels that are around 25% above the long-term norm, according to Tropical Storm Risk which has increased its forecast number of storms and hurricanes in its latest update.

Back in December, in its pre-season long-range forecast, the TSR forecast team called for 15 tropical storms, 7 hurricanes and 4 major hurricanes to form during the 2020 Atlantic tropical storm season, with accumulated cyclone energy (ACE)  forecast at a relatively low 105.

Now, the forecast has been updated to 16 named tropical storms, 8 hurricanes and 3 major hurricanes of category 3 strength or greater, but with an ACE forecast to reach 130.

“Based on current and projected climate signals, Atlantic basin tropical cyclone activity is forecast to be 25% above the 1950-2019 long-term norm and 5-10% above the recent 2010-2019 10-year norm,” the forecasters explained today.

TSR’s forecast calls for an above average number of hurricane and tropical storm landfalls in the United States as well, with 4 storms predicted and 2 hurricanes.

TSR notes the uncertainty in its long-range forecast and has provided new probability of exceedance curves for its ACE forecast and number of tropical storms.

The forecast team explained, “Seasonal outlooks for North Atlantic hurricane activity contribute to the anticipation of risk for insurance companies, other weather-sensitive businesses, and local and national governments. However, the uncertainty associated with such forecasts is often unclear. This reduces their benefit and contributes to the perception of forecast ‘busts’. The robust assessment of risk requires a full and clear probabilistic quantification of forecast uncertainty with the forecast issued in terms of probability of exceedance (PoE). In this way the chance of each hurricane number/activity outcome occurring is clear for the benefit of users.

“The plots below display our early April forecast outlooks for ACE (upper panel) and the number of hurricanes (lower panel) in terms of PoE. Each plot displays two sets of PoE data comprising the forecast PoE curve and the 1950-2019 climatology PoE curve.” 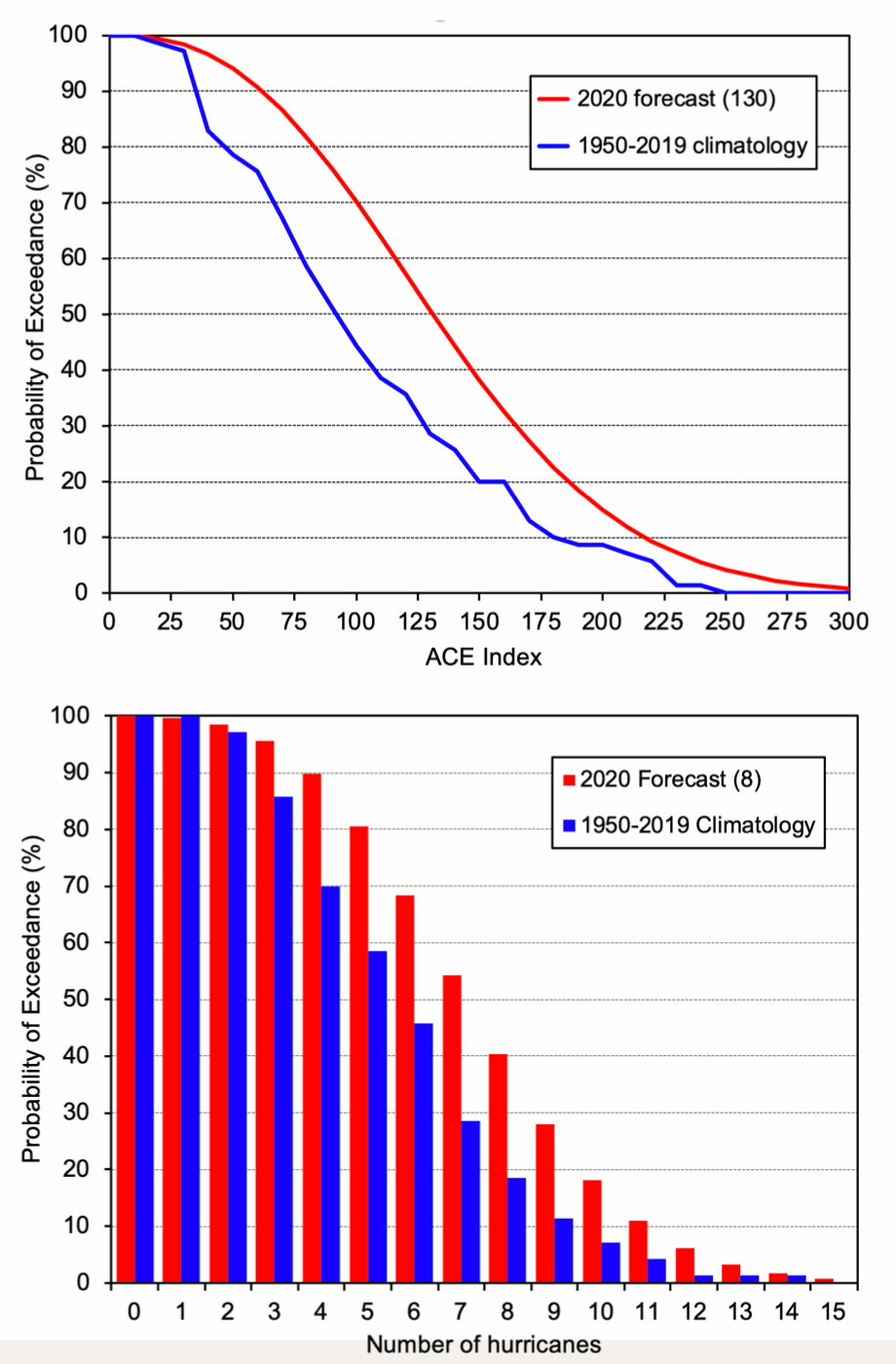 The addition of these exceedance curves is very useful for the insurance, reinsurance and insurance-linked securities (ILS) sector, as they try to understand the long-range forecast guidance from teams like TSR.

Across the four forecasters that we have data from so far, our Artemis average forecast for the 2020 Atlantic hurricane season now calls for 16 named tropical storms, 8 hurricanes and 4 major hurricanes, which is no change on our last update, with an average accumulated cyclone energy (ACE) forecast of 150 (up from 142).

Forecasts are all calling for above average levels of hurricane activity in the Atlantic, Caribbean and Gulf of Mexico in 2020, with an above average probability (possibility) of landfalls seen as well, across the forecasters.

Insurance and reinsurance interests will be watching closely as the season approaches, given this is a year when no one in the market would want to be dealing with a complex catastrophe claim at a time when the world is dealing with a pandemic as well.

The fact all forecasts currently suggest a 2020 hurricane season with an above average level of activity, does not necessarily mean the impacts will be above average, of course.

But in the current challenging environment, insurance, reinsurance and ILS interests will be acutely aware of the additional burden a major claims event could bring.