Alternative capital returned to growth in H2 2020: Willis Re

Growth of alternative reinsurance capital, so that largely managed through ILS funds or other insurance-linked securities (ILS), recovered in the second-half of 2020 according to Willis Re, ending the year at $90 billion, up 2% from the middle of the year.

When reinsurance broker Willis Re last reported on global capital levels it reported that both traditional and alternative reinsurance capital had shrunk by roughly 3% in the first-half of 2020.

The second-half of the year saw a strong recovery, thanks to fresh capital raising on the traditional side of the reinsurance market, as well as some new inflows to ILS vehicles, particularly for catastrophe bond funds.

Having fallen by 3% to $88 billion by the end of June 2020, alternative reinsurance capital ended last year at $90 billion.

The traditional side grew much more strongly, thanks to the largely private equity backed raises of new capital and start-ups, to reach $568 billion at the end of 2020, Willis Re reports. 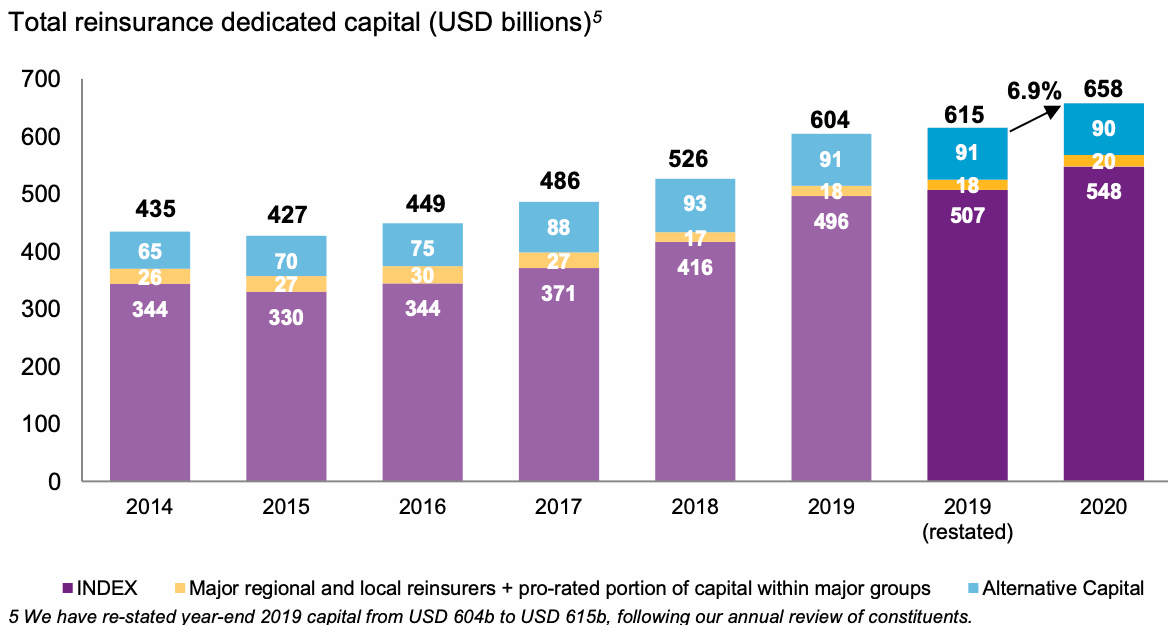 So total reinsurance capital reached $658 billion at the end of 2020, representing 7% growth year-on-year, Willis Re reported.

Interestingly, while new capital inflows are clearly an underlying driver of available capacity in the reinsurance market, Willis Re says that, “The rise was driven primarily by strong investment market appreciation. New capital raised both by incumbents and new entrants added to the total, but capital returns to shareholders exceeded those new investments.”

James Kent, Global CEO, Willis Re, commented, “Such a solid development of the global reinsurance industry’s capital base would hardly have been expected earlier last year, as the COVID pandemic was gathering pace. Willis Re’s analysis provides clear evidence of the strength and resilience of reinsurance market capacity.”

Alternative reinsurance capital does remain slightly down year-on-year, having stood at $91 billion at the end of 2019.

But the return to growth in the second-half of 2020 has likely continued through the first-quarter of 2021, suggesting a fresh measure of ILS fund and other alternative capital sources by this time may show that further lost-ground has been recovered by now.