The first-half of 2016 has seen both insured and economic natural disasters come in above the long-term average, with the insurance and reinsurance industry on the hook for $30 billion of a total $98 billion economic impact, according to Aon Benfield.

Global insurance and reinsurance industry losses from catastrophes, natural disasters and severe weather events in the first six months of 2016 are at their highest level since 2011, according to reinsurance broker Aon Benfield’s risk modelling and analytics unit Impact Forecasting.

The above long-term average nature of catastrophe losses in the last six months has been reflected in insurance and reinsurance market loss disclosures in recent weeks, as well as through impacts to a number of insurance-linked securities (ILS) funds and to collateralized reinsurance sidecar vehicles.

The figures quoted are preliminary at this time, Aon Benfield notes, and subject to change as more clarity emerges on recent catastrophe losses.

Interestingly, with 2011 being an outlier year of catastrophe losses around the globe, Aon Benfield have analysed the data using a median analysis and find that on that basis both economic and insured losses are well above average so far in 2016. 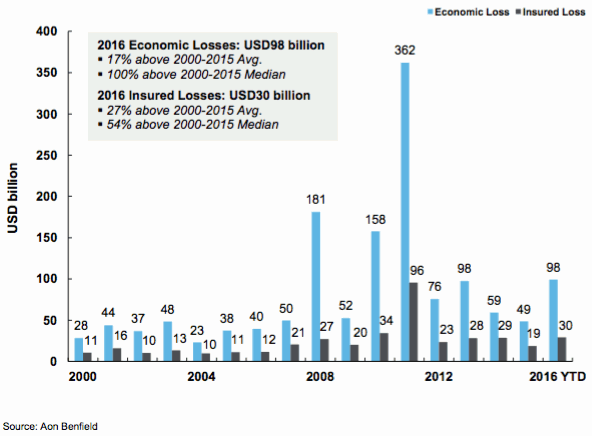 Earthquake was the costliest peril on an economic basis, accounting for $34 billion or 30% of the economic loss total.

The fact that 30% of the total economic natural disaster loss was insured is slightly higher than average, largely due to the U.S. being so prevalent in the loss events so far this year and the impact of convective storms.

The 10 year average is for 28% of the economic loss to have been insured, but with the U.S. accounting for 47% of global insurance losses sustained by public and private insurance or reinsurance entities in the first-half of 2016 it’s no surprise that the ratio of insured to uninsured has risen.

Steve Bowen, a Director in Aon Benfield’s Impact Forecasting team, commented on the figures; “The first half of 2016 ended up as the costliest on an economic and insured loss basis since 2011. The year has already been highlighted by a significant earthquake sequence in Japan, the Fort McMurray wildfire in Canada, flooding in Western Europe and a series of extensive hailstorms in the United States.

“With the pending transition to La Niña during the second half of the year, there will be a heightened focus on the risk of flooding across parts of Asia and hurricane landfall in the Atlantic Ocean basin. The financial toll of weather disasters during La Niña years has historically been among the costliest on record, and so we will wait to see whether this trend plays out in the coming months.”

The Philippines Insurance Commission has renewed its efforts to push through a bill that would make property catastrophe insurance mandatory...