Tropical storm and hurricane research meteorologists at Colorado State University have today issued an updated forecast for activity during the 2021 Atlantic hurricane season, continuing to call for an above-average season with 8 hurricanes, 4 of them expected to become major storms.

The team at Colorado State University (CSU) also continue to forecast an above-average chance of major hurricane landfalls occurring during the 2021 season, across the entire US seaboard.

At its last forecast update in April, the CSU tropical forecasting team said that factors related to El Nino and La Nina in the Pacific and warmer than normal subtropical Atlantic waters would drive another above-average hurricane season in 2021. These factors persist.

That early April forecast called for 17 named tropical storms to form, 8 of them becoming hurricanes and 4 becoming major hurricanes, with Category 3 or stronger winds.

Now, at its June update, the CSU team is calling for 18 named storms, 8 hurricanes and 4 major hurricanes for 2021, so still an above-average season, but now including sub-tropical storm Ana which formed in the Atlantic in May. 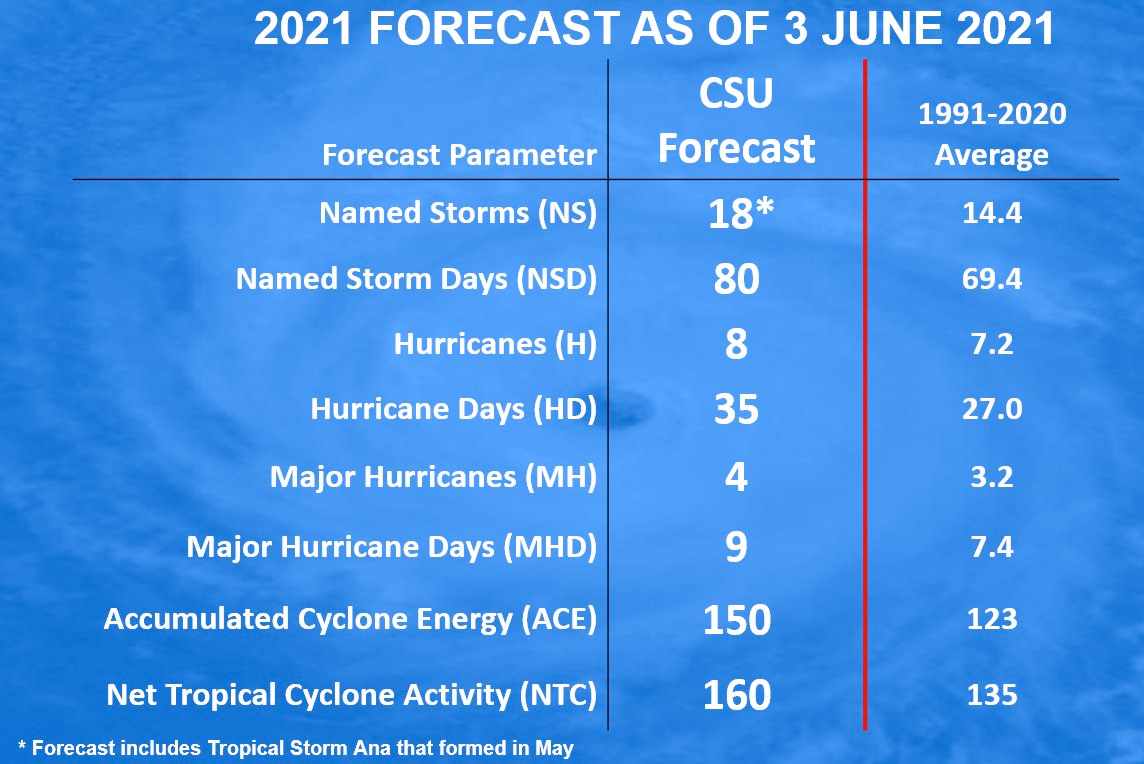 On top of other forecasts for another very active hurricane season, this update from CSU will add to insurance, reinsurance and insurance-linked securities (ILS) market data-points as the peak peril Atlantic hurricane season is now officially underway.

After the hyperactive 2020 season and some impactful, in terms of insurance, reinsurance and ILS market losses, seasons of recent years, all risk capital providers will be on alert for the first sign of any significant threat from 2021’s hurricane activity.

The CSU team explained on its latest forecast update, “We have maintained our above-average forecast for the 2021 Atlantic basin hurricane season. Current neutral ENSO conditions are anticipated to persist for the next several months. While sea surface temperatures averaged across portions of the tropical Atlantic are near to slightly below normal, subtropical North Atlantic sea surface temperatures are much warmer than average.

“We anticipate an above-normal probability for major hurricanes making landfall along the continental United States coastline and in the Caribbean.”

Philip Klotzbach, who leads the forecast team at CSU, explained that the likely lack of El Nino conditions in thee Pacific this year and the warmer than normal subtropical Atlantic temperatures, are the primary factors for continuing to predict above-normal levels of hurricane activity.

The tropical Pacific is currently characterized by neutral ENSO conditions, with anomalous eastern and central tropical Pacific warming over the past several months putting an end to this past winter’s La Niña event. We anticipate that neutral ENSO conditions are the most likely scenario for the peak of this year’s Atlantic hurricane season, and it seems unlikely that El Niño conditions will develop over the next few months. El Niño typically reduces Atlantic hurricane activity through increases in vertical wind shear.

Including this latest set of forecast data-points, from one of the main forecast teams tracked by the reinsurance, catastrophe bond and wider ILS industry, our Artemis average still sits at 17 named storms, 8 hurricanes and 4 major hurricanes, with ACE of 144.

As ever, the earlier the seasonal hurricane forecast, the less likely it is to prove totally accurate.

Forecast updates delivered later in the year, typically around August, tend to be the ones that the insurance, reinsurance and ILS market will take more literally, especially when it comes to making portfolio or hedging decisions.

As a result, it will be interesting to see how much hurricane activity there is by that time of the year and what changes we see in those forecast updates.

Directionally though, another forecast for a particularly active hurricane season should serve as a reminder for reinsurance market participants, as well as the ILS and catastrophe bond investment community, that there is always a very real threat of losses as the season progresses (remembering that it only takes one landfall to create significant human and financial impacts).