Tropical storm and hurricane research meteorologists at Colorado State University have issued a forecast calling for 8 hurricanes, 4 of them major, during the 2021 Atlantic hurricane season, while also forecasting an above-average chance of major hurricane landfalls occurring.

The team at Colorado State University (CSU) cite an expectation that La Nina conditions are more likely to persist in the Pacific and that warmer than normal subtropical Atlantic waters will drive another above-average hurricane season in 2021.

The forecast calls for 17 named tropical storms to form, 8 of them becoming hurricanes and 4 becoming major hurricanes, with Category 3 or stronger winds. 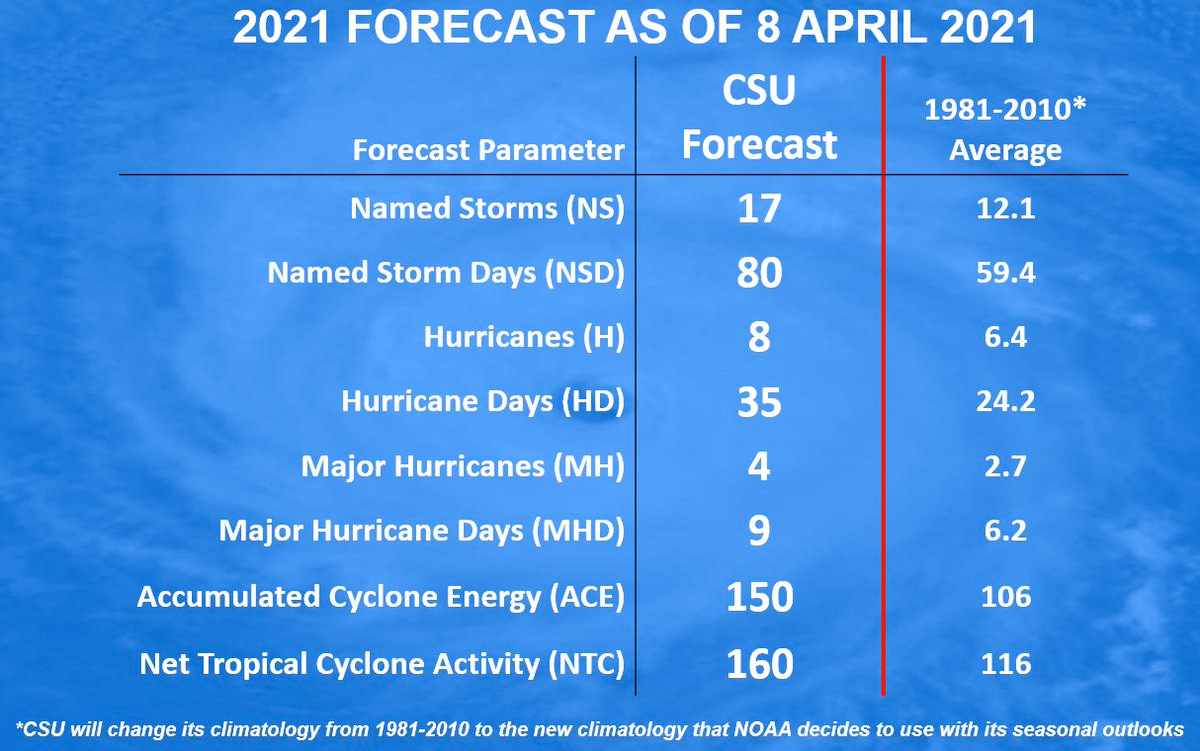 After the very busy 2020 season and some impactful, in terms of insurance, reinsurance and ILS market losses, seasons of recent years, risk capital providers will be on alert for the start of 2021’s hurricane activity.

Philip Klotzbach, who leads the forecast team at CSU, said, “Reasons for above-average forecast include predicted lack of El Nino and warmer than normal subtropical Atlantic.”

He added, “One of the reasons for the above-average seasonal hurricane forecast from CSU is due to the likely lack of El Nino this summer/fall. El Nino generally increases vertical wind shear in the Atlantic, tearing apart hurricanes.

The forecast summarises conditions as, “We anticipate that the 2021Atlantic basin hurricane season will have above-normal activity. Current weak La Niña conditions may transition to neutral ENSO by this summer/fall, but the odds of a significant El Niño seem unlikely. Sea surface temperatures averaged across the tropical Atlantic are currently near average, while subtropical Atlantic sea surface temperatures are warmer than normal. We anticipate an above-average probability for major hurricanes making landfall along the continental United States coastline and in the Caribbean.”

This week we added the latest from forecaster Accuweather, who called for 16-20 named storms to form during the 2021 Atlantic tropical season, 7 to 10 of which would become hurricanes and with between 3 to 5 forecast to become major hurricanes (Category 3 or higher with maximum sustained winds of 111 mph or greater).

Yesterday we also added WeatherBELL, who forecast an even more active season, with 16 to 22 named tropical storms forecast to form, between 9 and 13 of which are forecast to reach hurricane status and with between 3 and 6 becoming major hurricanes.

Now, with another set of data-points from one of the main forecast teams tracked by the reinsurance and ILS industry, our Artemis average has risen to 18 named storm, 9 hurricanes and 4 major hurricanes, with ACE of 148.

It’s important to remember that it only takes one landfall of a major hurricane in a highly populated and urbanised coastal area to cause billions in economic damages, along with significant losses that flow into reinsurance structures, meaning even the most benign hurricane forecasts can still result in impactful seasons.

At the same time, a forecast for a particularly active season can also result in relatively minor financial costs, should hurricanes form far out in the ocean and fail to reach land at major strength, or in populated regions of coastline.

So, it’s important to use forecasts wisely and to form your own views on the risk a particular hurricane season poses. But these forecasts from meteorologists are helpful in seeing what kind of trends may be expected and it increasingly looks like an above-average season may be in the cards.

We expect another forecast from Tropical Storm Risk next week. We’ll update you as that and other forecasts are added into our numbers as hurricane season approaches.