Losses from severe thunderstorms and convective weather across the United States continue to build, with this week set to bring minimally hundreds of millions of dollars more in property losses for the insurance and reinsurance industry, according to broker Aon.

Impact Forecasting, the meteorology and catastrophe modelling division of the insurance and reinsurance broker, recently said that losses from the severe convective storm peril were already on-track to surpass $20 billion again in 2022.

The first week of July has seen daily severe convective weather outbreaks along the ridge of a ‘heat dome’ that was anchored over the Plains and South, Aon’s team explained.

The storms that broke out brought with them severe winds, damaging hail, torrential rainfall, and isolated tornadoes, causing damage to certain areas.

On July 5th a progressive derecho resulted in “exceptional straight-line winds”, with wind-speeds that exceeded 90 mph (145 kph) experienced in parts of South Dakota.

The extent of this week’s severe weather can be clearly seen in the local storm reports image shared by Impact Forecasting, below. 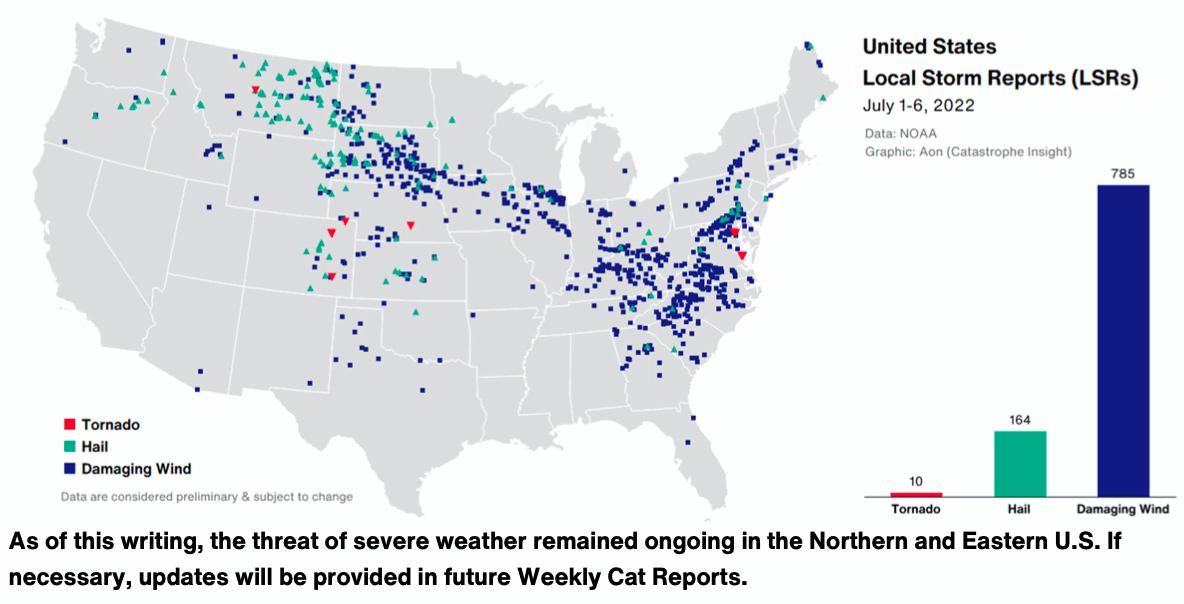 Commenting on the potential for damages to result in losses to the insurance and perhaps reinsurance industry, Aon’s unit said it will prove to be another costly week to add to the annual total.

“The most recent stretch of severe weather across the United States will add to what has been a very active period the peril in recent months. Total economic and insured losses from the week between July 1-7 alone were individually anticipated to reach into the hundreds of millions (USD),” Impact Forecasting explained.