Tropical storm Barry has now formed in the Gulf of Mexico, the second named storm of the 2019 Atlantic hurricane season, and is forecast to bring long-duration, torrential rainfall and could intensify into a hurricane Barry by landfall.

Tropical storm Barry began as a low pressure system that moved way southwards across the Gulf of Mexico coast of Florida and once over the warm waters has intensified into the second named tropical cyclone of the season.

It’s been tracked by the insurance, reinsurance and ILS market over the last few days, with an expectation that the second named storm would form, which has now proven to be the case as the meteorological models has suggested. 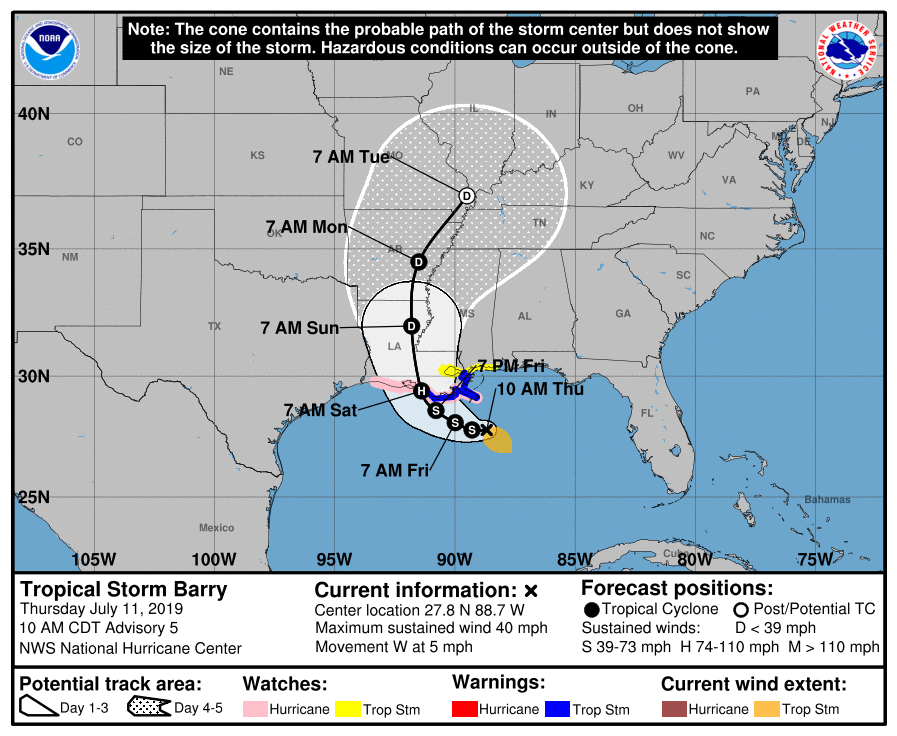 Currently the major threat from tropical storm Barry is torrential and long-duration rains that are expected to affect the Gulf region around Louisiana, with isolated storm totals of up to 20 inches expected.

That’s likely to cause significant flooding threats around the Louisiana coastal regions and Mississippi river forecasts suggest possible high water levels at close to the height required to top levees in the New Orleans area.

News sources say that the Mississippi is forecast to reach its crest at the highest level since 1927 this weekend due to tropical storm Barry’s rains.

The region has been hit by severe rainfall from early season storms in the past, which even if not achieving hurricane strength can still be extremely impactful, costly and threaten lives.

Reports from Air Force Reserve and NOAA Hurricane Hunter aircraft indicate that maximum sustained winds have increased to near 40 mph (65 km/h) with higher gusts. Additional strengthening is expected during the next day or two, and Barry could become a hurricane late Friday or early Saturday.

On the rainfall expected, the NHC says:

Barry is expected to produce total rain accumulations of 10 to 15 inches near and inland of the central Gulf Coast through early next week, with isolated maximum rainfall amounts of 20 inches across portions of eastern Louisiana and southern Mississippi.

And on storm surge potential the NHC warns:

The combination of a dangerous storm surge and the tide will cause normally dry areas near the coast to be flooded by rising waters moving inland from the shoreline. The water could reach the following heights above ground somewhere in the indicated areas if the peak surge occurs at the time of high tide…

Hence the torrential rainfall, potential for river flooding, as well as the chance that storm surge backs waters up into the rivers all threatens a severe flood related event for the region.

Currently the hurricane models only show a chance of Barry reaching hurricane strength of Category 1, so not severe in terms of wind damage it currently suggests. 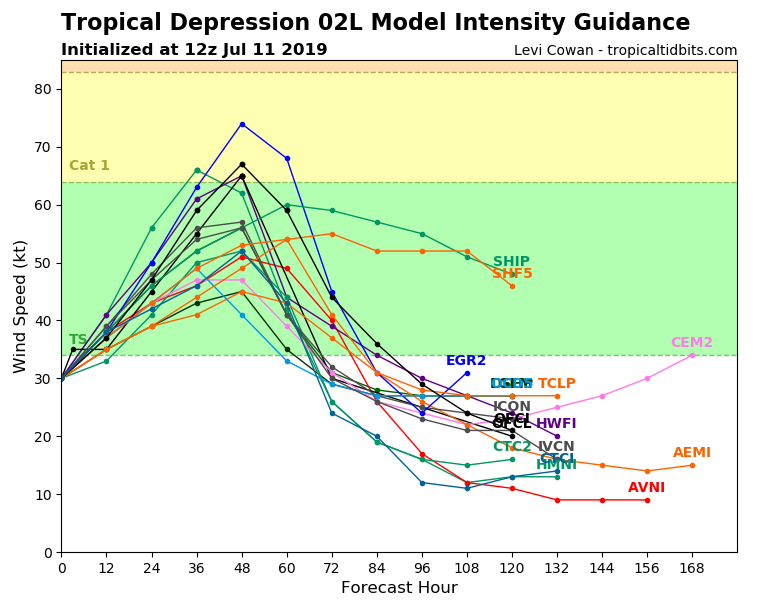 But the longer Barry meanders over the warm Gulf waters the greater the threat of further intensification could become, making Barry a tropical storm to watch over the next day or so.

For the insurance, reinsurance and insurance-linked securities (ILS) sectors tropical Barry is likely mainly a flooding threat right now, which is of course likely to fall largely to the NFIP’s flood insurance, as well as some private flood coverage providers.

But with the levees potentially at risk of over-topping, should a worst case scenario ensue, it’s certain to concern local authorities greatly and the threat to lives and property would be high.

Insurance, reinsurance and ILS market interests should continue to watch tropical storm Barry’s movements in the Gulf of Mexico closely over the coming day or two.