Two of the main Atlantic hurricane forecasts have been kept almost static, one citing the slightly reduced chances of an El Niño influence during the season ahead, while at the same time a low pressure disturbance has a good chance of becoming tropical storm Barry in the Gulf later this week.

The hurricane forecasters from insurance and reinsurance industry backed Tropical Storm Risk has made the smallest of tweaks, sticking with their prediction for 12 named tropical storms, 6 hurricanes and 2 major hurricanes of Category 3 or greater to form during the 2019 Atlantic storm season.

This team have lifted their forecast for Accumulated Cyclone Energy (ACE) by a single point to 89 for the season as a whole, while their forecast in general calls for Atlantic basin tropical cyclone activity of around 10% below the 1950-2018 long-term norm and about 20% below the recent 2009-2018 10-year norm.

Meanwhile, the Colorado State University hurricane forecast team led by Phil Klotzbach calls for a slightly higher 14 named storms, 6 hurricanes and 2 major hurricanes, but notes the potentially diminishing chances of El Niño being an influence during the year.

The team wrote, “We believe that the odds of a weak El Niño persisting through August-October have diminished slightly. However, neither ENSO nor tropical Atlantic sea surface temperatures look particularly favorable for an active season. The probability for major hurricanes making landfall along the United States coastline and in the Caribbean remains near its long-term average.”

El Nino and whether it forms is less certain now for the 2019 hurricane season, after one forecaster of ENSO said the chance of El Niño developing in the coming months has dropped considerably.

At the time of writing, a low pressure system is spinning its way southwards across the Gulf of Mexico coast of Florida and has now been given a 90% chance of becoming tropical storm Barry, the second named storm of the 2019 Atlantic hurricane season. 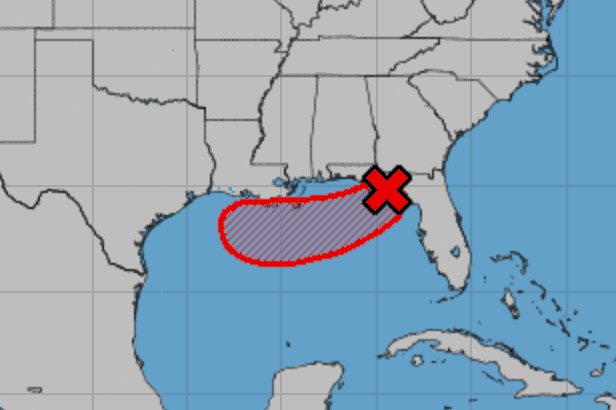 This low pressure system or depression has been watched for the last few days by meteorologists as it tracked southwards across the United States and headed for the Gulf of Mexico.

It’s expected to sit over the warmer waters of the Gulf for a few days and is given a good chance of gaining tropical storm characteristics as it meanders westwards.

Tropical storm Barry is expected to move west and then curve back up towards the coast from New Orleans to along the Louisiana coast, perhaps as far along as Houston in Texas.

You can see a recent hurricane forecast model ensemble run from TropicalTidbits below: 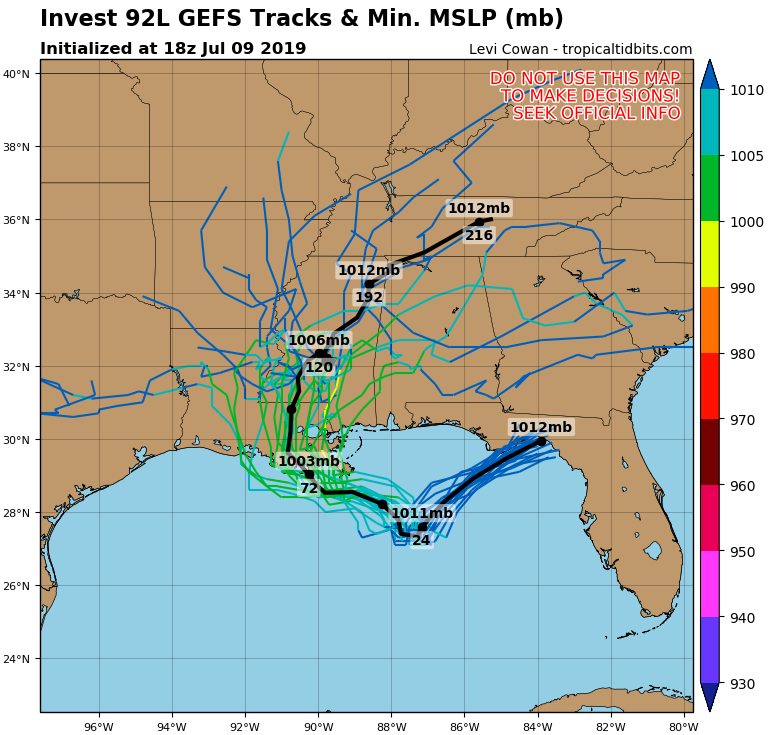 How strong a tropical storm Barry can become is currently very uncertain, as the forecasts range wildly from a weak to mid-strength tropical storm to the full development of an insurance and reinsurance market worrying hurricane Barry before landfall.

You can see a recent hurricane model intensity forecast from TropicalTidbits below: 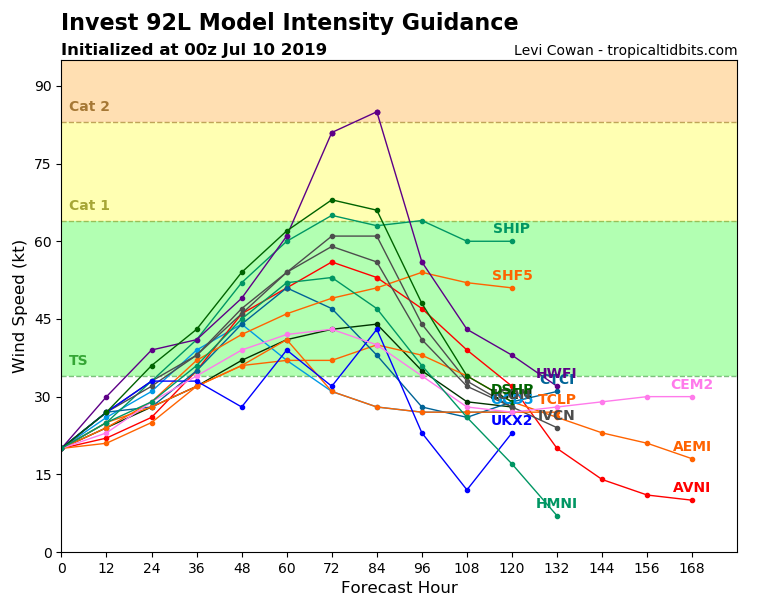 Sea surface temperatures in the Gulf of Mexico are high currently and wind shear is expected to be light, providing conditions conducive to development of tropical storm Barry.

But whether the storm will stay over the waters long enough to become hurricane Barry is less clear, at the moment it seems an outside chance.

Eastern Texas to Louisiana appear the most threatened by a landfall from tropical storm or perhaps hurricane Barry.

Heavy and flooding rainfall is expected to be the major threat posed by tropical storm Barry, as even if the winds do intensify somewhat it is very unlikely to become a significant wind event, even if it does attain weak hurricane status.

Barry is one to watch over the coming days. It is likely to be named a tropical storm later today and then it’s future will need watching closely, as should it stay offshore for longer than expected a greater intensification is possible.

Insurance, reinsurance and ILS market interests should watch the tropics closely over the coming days. Visit our 2019 Atlantic hurricane season page for forecasts and tracking maps as the season continues.