Interesting news for anyone interested in the forecasts for Atlantic tropical storm and hurricane activity levels, which let’s face it includes the majority of the ILS and reinsurance markets. The chance of El Niño developing in the coming months appears to have dropped considerably, by one metric. 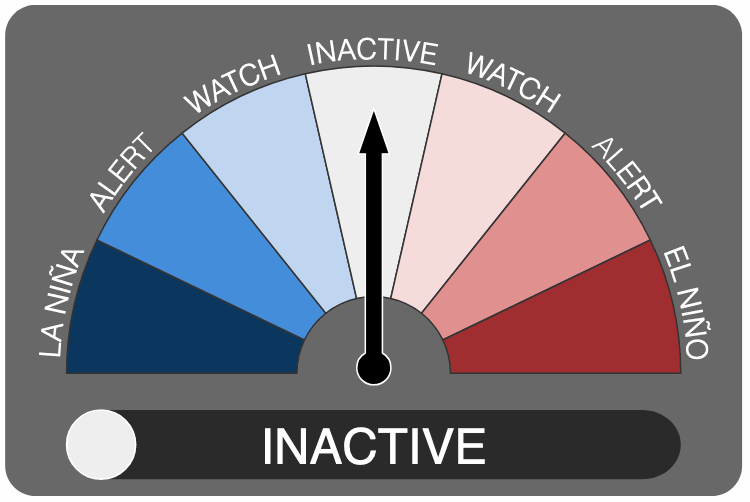 El Niño is understood to have an influence on levels of Atlantic tropical storm and hurricane activity and when we’ve been covering the forecasts in the run up to the 2019 Atlantic hurricane season, almost all have mentioned El Niño as a key factor in their predictions.

In fact almost all have mentioned the fact that the chances of an El Niño developing in the Pacific led them to issue a reduced forecast, as they would normally expect such a development of El Niño conditions to suppress or reduce hurricane activity in the Atlantic basin, through wind shear and pressure differentials, as well as other factors.

But now, the Australian Government Bureau of Meteorology (BOM) says that the “immediate likelihood of El Niño developing has passed.”

As a result the BOM’s official El Niño outlook has been set to “Inactive” suggesting that it doesn’t even currently see the chance of a developing El Niño later this year.

The meteorological bureau explained its reasoning, “While the possibility of El Niño can’t be completely ruled out for 2019, the tropical Pacific Ocean is more likely than not to remain in an ENSO-neutral phase over the coming months. Model outlooks indicate a positive Indian Ocean Dipole is likely to drive Australia’s weather for much of the rest of 2019, meaning the likelihood of a drier than average winter–spring remains.

“Oceanic and atmospheric indicators are now largely at ENSO-neutral levels. Tropical Pacific sea surface temperatures have cooled over the past fortnight but remain slightly warmer than average. Cloudiness near the Date Line and trade winds have been close to neutral over recent weeks, while the Southern Oscillation Index (SOI) has hovered around El Niño threshold values over the past month. With little anomalous warmth in the ocean sub-surface, most climate models indicate the tropical Pacific will continue shifting further away from El Niño thresholds through the winter.”

Particularly interesting is that last line, that the climate models now show the Pacific actually becoming less El Niño-like as the winter proceeds. In fact the models suggest the tropical Pacific Ocean will remain ENSO neutral, although still somewhat warmer than average.

Previously and as referenced by the majority of the hurricane forecasts that have already been published, the expectation was that El Niño  conditions would develop or begin to develop towards the latter stages of the 2019 Atlantic hurricane season.

As this is considered a factor that can suppress Atlantic hurricane activity, it’s safe to assume that the chances of an El Niño being on the horizon was a factor in most forecasters numbers for the season ahead.

As a result, now the outlook for El Niño has changed and climate models show much less chance of this occurring this year there’s a good reason to consider that the hurricane forecasts may all now require a little updating.

However, the BOM’s outlook doesn’t mean the chance of El Niño conditions developing in the Pacific has gone away all together, just that the chances are reduced.

It explains, “An INACTIVE status means that ENSO is neutral and there are no clear indications that an El Niño or La Niña event will develop in the coming months. It doesn’t mean the chance of El Niño has dropped to 0%, but the odds of an event has dropped below 50% and ENSO-neutral is now considered the most likely outcome.”

It will be interesting to see whether this impacts the next round of hurricane forecast updates as they come in.

For insurance, reinsurance and insurance-linked securities (ILS) interests it should perhaps present a warning against reading too much into long-range forecasts derived off the back of ENSO or other variables such as this.

These metrics can and do change.

Of course, nobody should be making reinsurance underwriting or investment decisions based on hurricane or ENSO forecasts, but the predictions for the number of storms are used as a guide for what to expect through the year ahead.

Everyone in reinsurance knows it only takes one storm to throw the sector a curveball and bring billions of damages and losses to the traditional market and ILS fund sector.

But given the chances of an El Niño now seem much slimmer, perhaps the chances of more tropical activity in the Atlantic look greater, which does of course bear some attention and analysis by the industry.

We asked Brendan Lane Larsson, Co-Founder, Climatologist, Physical Meteorologist at AbsoluteClimo for his opinion on this, which he provided, “Much of the insurance industry continues to struggle with the El Niño La Niña Southern Oscillation paradigm, a 30 year old antiquated conceptual model poorly suited for today’s enterprise climate risk management and financial decision making needs. Trying to forecast seasonal or annual financial variability and economic impacts linked to ENSO is like fortune-telling from reading tea leaves.

“One must understand ocean dynamics and ocean circulation including at deeper levels, with both R&D modeling and practitioner’s experience in oceanography, beyond mere meteorology (which is where the bulk of the world’s incumbent experience is at). There is good reason why we are headquartered in Honolulu.”

You can track forecasts for and activity during the 2019 Atlantic hurricane season here on Artemis.