During its annual investor day this morning, Swiss Re’s CFO John Dacey explained just how important the use of alternative capital and relationships with insurance-linked securities (ILS) investors has become for the company, explaining that it aims to build on its use of ILS capacity and find ways to make the capital more permanent. 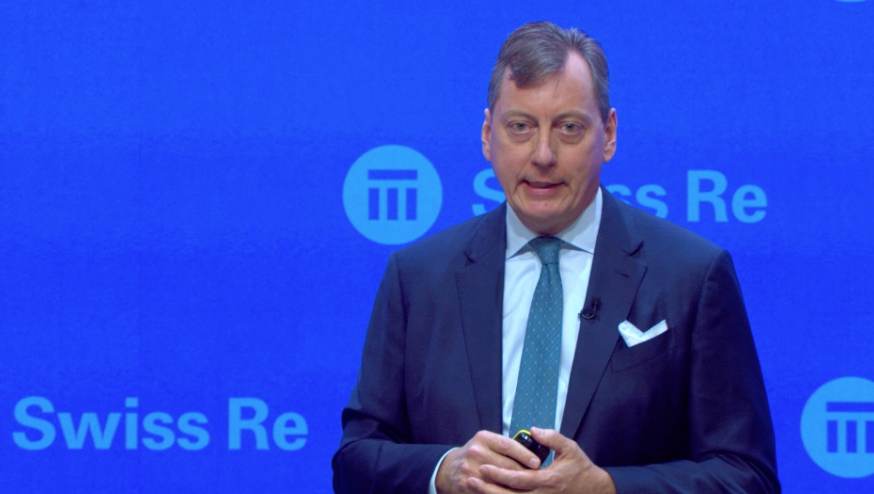 Swiss Re has significantly expanded its use of alternative sources of reinsurance capital in the last few years, both as a manager of third-party investor capital through its collateralised quota share sidecar platform, as well as through a portfolio of managed cat bonds and other ILS structures, plus as a source of retrocession through its Matterhorn Re cat bond program.

As we’ve explained before, Swiss Re’s alternative capital under management reached roughly $2.5 billion this year, as the reinsurers Head of Alternative Capital Partners Philipp Rüede explained to us recently.

This is split across Swiss Re’s Sector Re quota share sidecar vehicle, its direct partnerships with major investors, such as with PGGM through the Viaduct Re sidecar structure, other investor relationships and its internally managed cat bond and ILS securities portfolio.

Add to this Swiss Re’s expanding Matterhorn Re catastrophe bond program, which is in the progress of issuing its fifth catastrophe bond of the year at this time, the company is now heading for almost $1.5 billion of cat bond market supplied retrocession to add to this.

At the investor day this morning, Swiss Re CFO John Dacey presented a few slides on the work of Alternative Capital Partners and explained the importance of this capital source to the company, a clear demonstration of the important role ILS is playing in Swiss Re’s business model today.

Dacey began by saying that the growth of the Alternative Capital Partners unit at Swiss Re, “provides additional flexibility for our capital structure.”

First he referenced the internal investments Swiss Re is making in catastrophe bonds and other insurance-linked securities (ILS), which it transpires is not just for the returns. 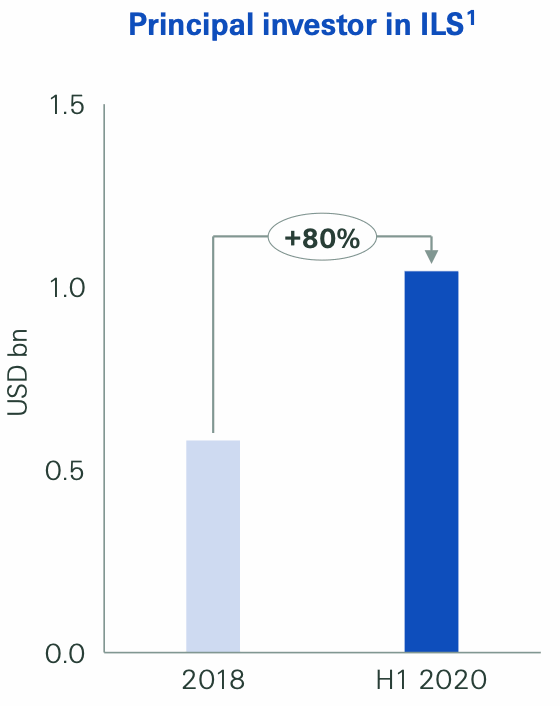 “We have an inventory, or portfolio, of securities in the ILS space, that’s grown this year thanks to seeing good price opportunities available to us, to a little over $1 billion at the middle of the year,” Dacey said.

Swiss Re has grown this portfolio of ILS instruments, which includes largely liquid tradable catastrophe bonds, but also some industry loss warranties (ILW’s) and private indexed transactions, by 80% since 2018.

Going on to explain that, “We do this in the first place for the positive income. But it’s also for the market insight, particularly pricing in the US natural catastrophe market.”

That’s an important point, as Swiss Re is gathering insights here into the capital markets pricing of natural catastrophe risks, which given it plays a role at so many different points along the value-chain of insurance risks as they are transferred to the capital markets will be a significant driver of its renewed appetite for using catastrophe bonds for retrocession as well.

It’s likely Swiss Re can see where the most efficient use of the capital markets can be for the company and in recognising this has elected to grow that activity significantly as a result. The reinsurer has been investing in ILS for 20 years, which will have delivered a lot of insightful data to support its broader activities in the natural catastrophe reinsurance space.

Alongside investing in ILS, Swiss Re is also a major participant in the structuring, issuance and sale of insurance-linked securities (ILS). 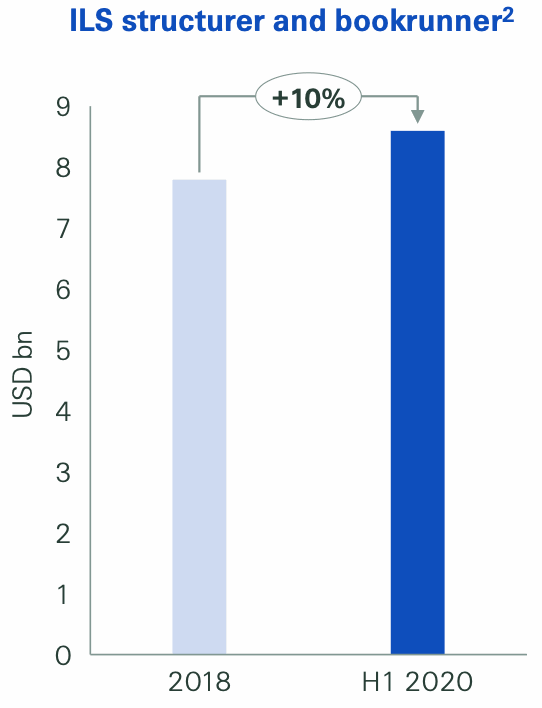 The reinsurers capital markets team has worked on catastrophe bond issues since the beginning of the marketplace, having first structured a deal back in 1997.

In fact, as well as having sponsored its own cat bond in 1997, the company also worked on the pioneering Parametric Re Ltd. transaction that year, which was a first in terms of leveraging a parametric trigger for a catastrophe bond structure.

Dacey noted that, in terms of structuring and bookrunning ILS deals, “We continue to be a major player in this space.”

By the end of the first-half of the year, Swiss Re had worked as structuring agent or bookrunner on almost $9 billion of ILS transactions, Dacey continued, which is a 10% increase in terms of notional outstanding on 2018 as the chart to the left shows.

Next, Dacey turned to the way’s Swiss Re utilises insurance-linked securities (ILS) and alternative reinsurance capital to better manager the risk within the group.

“We’ve got an ability in ACP to manage our own risk in the group, so we’ve seen a significant growth in our sidecar program,” Dacey said.

He went on to say that the sidecar activity, “Supports the profitable growth we’ve seen on the natcat side of the Swiss Re group.”

Swiss Re’s collateralised reinsurance sidecar platform, which includes the Sector Re vehicle and also the Viaduct Re vehicle we believe, has increased in size by 144% since 2018, now standing at around $1.5 billion in size.

Swiss Re is using this to manage its own net exposure, by ceding risks to third-party investors, which has resulted in atrractive returns both for the alternative capital investors and Swiss Re’s own shareholders, whole the company earns a commission or spread between risk taking and hedging.

Looking forward, Dacey said that Swiss Re aims to capitalise on the increasing permanency of third-party capital within reinsurance and expects to launch new vehicles that will focus on playing to this developing feature of the alternative capital market.

“We’re looking to see if there might be some opportunities for more durable sourcing of capital for the Swiss Re group and an extended partnership,” Dacey said.

Adding that, “I hope the next time we report we’ll be able to explain some success from these additional activities.”

Larger investors in insurance-linked securities (ILS) are increasingly coming to the sector with longer-term horizons, as too are investors that are becoming increasingly experienced in reinsurance and ILS.

Being able to leverage investor appetites across underwriting cycles could have distinct advantages, both for reinsurers like Swiss Re and also for the end-investor ultimately.

Of course, this could also allow Swiss Re to leverage third-party capital across a broader proportion of its book, if the appetite can be leveraged to cover slightly longer-tailed classes of risk.

At this time the alternative capital Swiss Re utilises is largely designed to support its P&C reinsurance book, although at the Group level of course it also supports the companies exposure to large nat cat events in other areas of its book as well.

Dacey expanded on this idea of the permanence of third-party capital, explaining that, “The idea of increasing the permanency of capital, as well as the sidecar that works very well for us and the cat bonds that we’ve had very little trouble placing at pricing that works, is we’re looking for options for ourselves at the Swiss Re group, to have some more permanent capital structure in place.

“We think that supporting Swiss Re’s business with something more permanent and an additional set of investors would be beneficial. We’re looking to develop something inside Swiss Re.”

It sounds like Swiss Re is looking to create some sort of more permanent, multi-year sidecar like structure, where third-party investors with an appetite for shorter-tailed risks can support its book across cycles, over multiple years.

More permanent efficient capital would benefit Swiss Re greatly to optimise its book and operations across the cycle, while at the same time perhaps allowing the range of risks ceded to these investors to broaden out slightly from the very short-tail nat cat focus we see today.

At its core though, Swiss Re’s use of alternative capital is focused on capital efficiency and support for its book, it seems.

Dacey explained, “The ACP team has helped us think about our broader capital structure and the capital relief we receive has increased by 75% thanks to the retro activities of this team.”

In fact, Swiss Re shared data today that shows since 2018 the shortfall capital relief it receives for North Atlantic hurricane risk has increased by a huge 146%. A lot of this will have been driven by the Matterhorn Re catastrophe bonds, we imagine.

Dacey closed by forecasting further growth and possible expansion in remit for its Alternative Capital Partners activities, saying, “We expect they (ACP) will continue to grow to support our reinsurance team and potentially also the CorSo team as well.”