A new study looking at the damage caused by hurricanes since 1900 concludes that there is a trend towards larger and more destructive storms, while the most damaging of them are said to be occurring more frequently, with climate change and global warming said a driver.

The subject of hurricane damage, frequency and climate change is one that can generate polarised views, hence any research to help unpick the facts from the noise surrounding the subject is extremely helpful, particularly for the catastrophe bond, insurance-linked securities (ILS) and reinsurance market which is so exposed to global cyclone impacts.

This study, undertaken by researchers Aslak Grinsted, Peter Ditlevsen and Jens Hesselbjerg at the Niels Bohr Institute, University of Copenhagen, and edited by Kerry A. Emanuel of the Massachusetts Institute of Technology, took a different approach to looking at hurricane damage, focusing on the actual area of land-mass impacted, rather than economic or insurance and reinsurance related costs, where development and inflation can serve to make trends more difficult to find.

The researchers focused on a single unit representing damage, focusing on the area of total destruction rather than dollar values impacted, which levels the field across high-value, urban areas such as cities and more rural or lower-value residential regions.

It has always been more typical to compare the damage of one hurricane with another, but over time this has led to more noise than signal in some studies results, while those denying climate change would always point to economic development as the cause of rising hurricane related costs.

But a focus on the actual area of land-mass destroyed makes much more sense, as it takes cost out of the equation and also factors that are a significant driver of losses such as the location of a landfall, or the track of a storm.

The findings suggest that the frequency of the most destructive hurricanes has risen at around 330% per century.

At the same time, the researchers write that they believe climate change is a factor in this, concluding, “Our data reveal an emergent positive trend in damage, which we attribute to a detectable change in extreme storms due to global warming. Moreover, we show that this increasing trend in damage can also be exposed in existing normalized damage records by looking at the frequency of the largest damage events. Our record of normalized damage, framed in terms of an equivalent area of total destruction, is a more reliable measure for climate-related changes in extreme weather, and can be used for better risk assessments on hurricane disasters.”

The chart below shows the frequency of events destroying a certain amount of land-mass, the area of total destruction (ATD). The white represents the most severe hurricanes and shows a 3.3x increase in frequency. 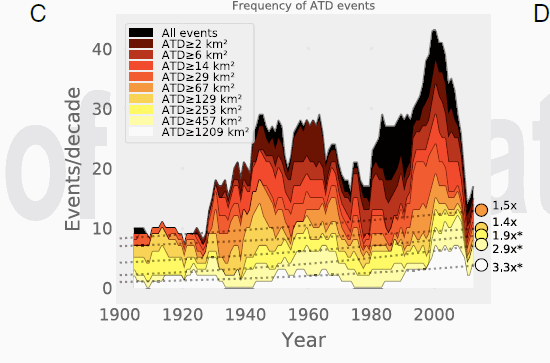 The researchers also said that the signal towards greater frequency of more damaging storms can also be found in the data sets of other studies on hurricane damage and climate change, which may help to encourage greater acceptance of this conclusion.

Study author and climate scientist Aslak Grinsted said to the Associated Press, “It’s the most damaging ones that are increasing the most. This is exactly what you would expect with climate models.”

Such findings are set to be controversial in some meteorology and climate science circles, as finding any kind of consensus on issues related to climate can be particularly challenging.

The AP cites National Oceanic and Atmospheric Administration hurricane scientist Jim Kossin, who was not involved in the research, as commenting on this study, “Their result is consistent with expected changes in the proportion of the strongest hurricanes and is also consistent with the increased frequency of very slow-moving storms that make landfall in the U.S.”

Meanwhile, other hurricane experts are expected to stick with their research that shows no notable increase at this time, however these are often based solely on meteorological factors and don’t always factor in other variables related to damage.

It remains a contentious subject, but in insurance, reinsurance and insurance-linked securities (ILS) it’s increasingly important to look to any available research in helping to derive probabilities of loss and ultimately pricing as well.

As the climate changes, so too are the effects of weather and climate patterns, which is widely believed to be impacting damage potential.

As a result, such studies are useful, especially when they leverage a different or new methodology to asses hurricane damage over time. The focus on area destroyed seems particularly useful, as it removes costs, inflation, landfall specifics and issues like loss creep from the equation, by focusing solely on the physical impact to area.