Levels of third-party capital in the reinsurance market, across insurance-linked securities (ILS) funds, collateralised reinsurance structures and catastrophe bonds, are now down almost 10% from their high-point in 2018, according to the latest data from A.M. Best and Guy Carpenter.

The rating agency and the reinsurance broker have again published their latest estimates for ILS capital in reinsurance, estimating it at $86 billion in 2020, down over 2% year-on-year.

Third-party reinsurance capital is now down roughly 10% on its high of $95 billion in 2018, based on A.M. Best and Guy Carpenter’s estimate, reflecting the significant impacts of consecutive catastrophe loss years and the loss creep that followed in the case of certain events. 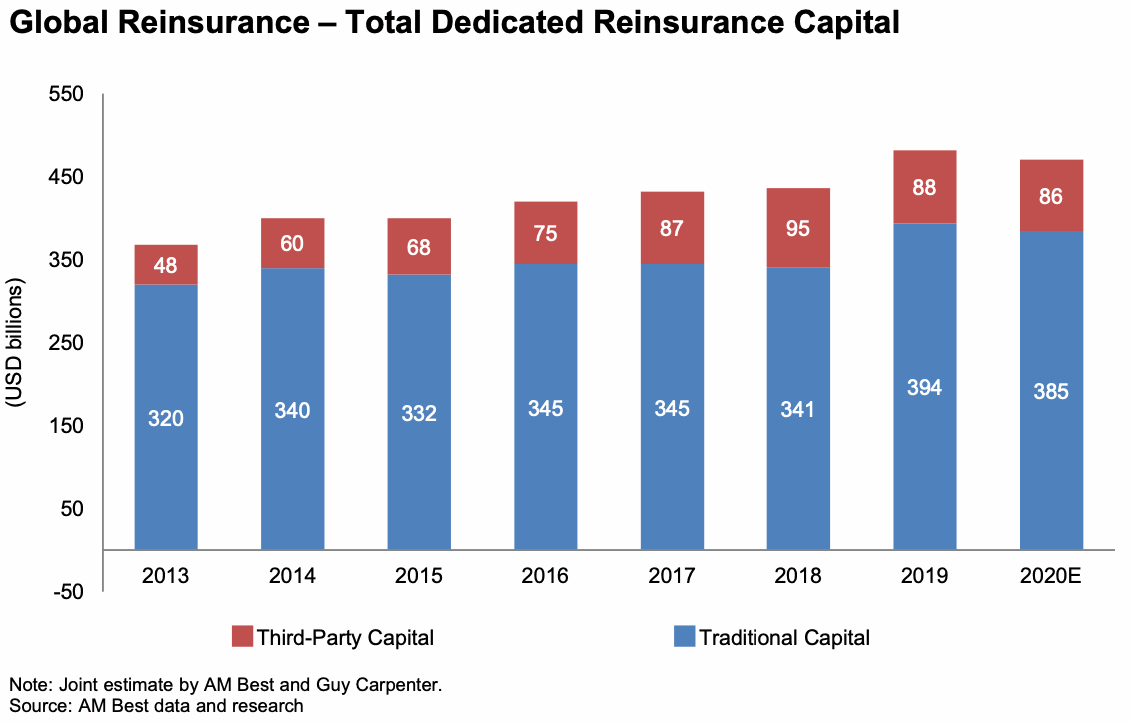 However, certain segments of the ILS market have faired better than others and it turns out that reinsurance company sponsored managers, of third-party or ILS capital, have lost a greater percentage of their assets than dedicated ILS fund managers in recent years.

Looking at the period since 2018, when third-party and ILS capital in reinsurance began to decline, according to the estimates from A.M. Best and Guy Carpenter, we can see in the chart below that reinsurance company sponsored managers (including sidecar vehicles) have declined in assets by almost 18% from $34 billion to $28 billion in 2020. 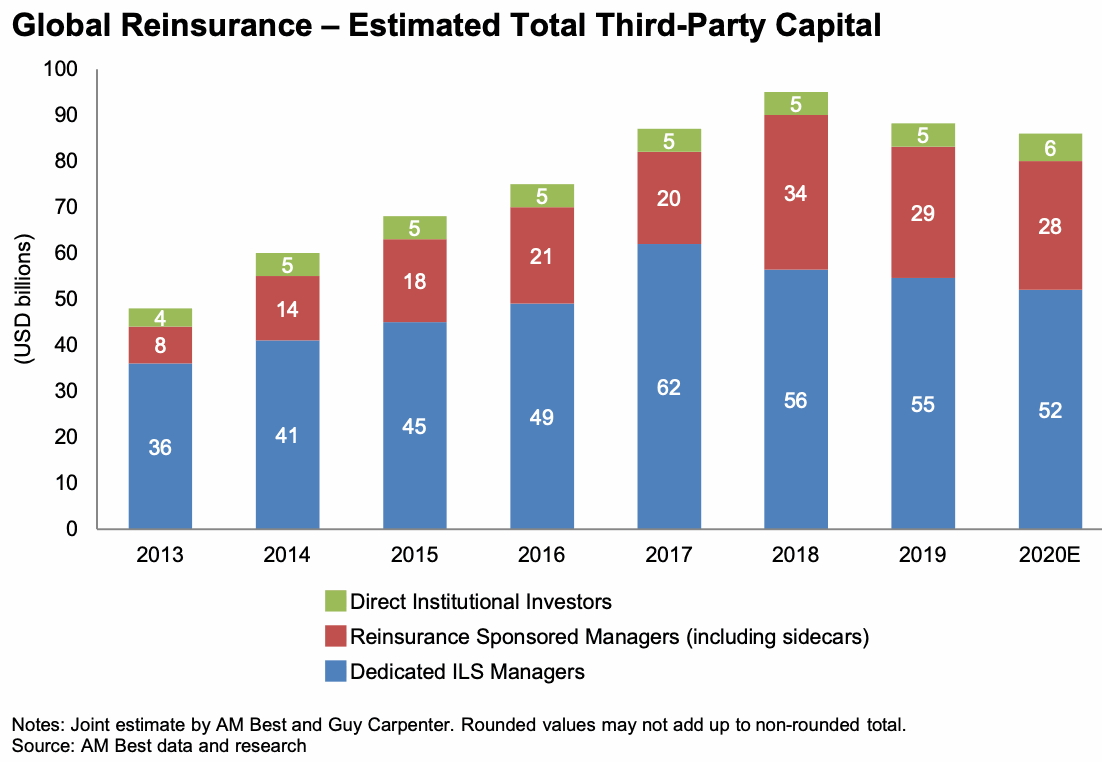 At the same time, dedicated insurance-linked securities (ILS) fund managers assets under management have only declined by 7% over the same period, from $56 billion in 2018 to $52 billion in 2020.

Even if we go back a year further to 2017, when dedicated ILS managers were estimated to have had $62 billion of assets under management between them, there’s only been a 16% drop in third-party reinsurance capital deployed by these investment fund managers.

It’s interesting, as many reinsurer sponsored managers have leveraged fronting more than a dedicated ILS fund and so been able to avoid some of the issues related to trapped ILS collateral.

But still, the reinsurer sponsored ILS funds, sidecars and other structures, have been more heavily affected by the loss events and loss creep of recent years, on a percentage basis it seems.

The other bucket of third-party capital channels, the direct institutional investors, have actually seen their third-party reinsurance capital assets increase, reaching $6 billion in 2020, up 20% from the $5 billion they commanded as far back as 2014, according to this data.

It seems to us that one of the major reasons that reinsurer managed ILS capital has declined faster than dedicated ILS fund managed, is down to the experiences of sidecars and quota shares in recent years.

Some of these structures were hit particularly hard by catastrophes in 2017 and 2018, driving capital out of those vehicles.

In a number of cases renewing those sidecars and quota shares was also a challenge and many are smaller, or were not renewed.

That likely drove the fact reinsurer sponsored managers shrank a little faster and the levels of decline would likely have been more even otherwise.

Perhaps more interesting will be how and where growth returns, as investors confidence is returning and inflows beginning to be seen once again.

Quality and track-record will, of course, be key in attracting and capturing these future ILS investor flows.