Forecast models suggest a chance of a new tropical storm developing later this week or into the weekend, with some longer-range model runs suggesting a possible hurricane threat for the US Gulf Coast early next week. 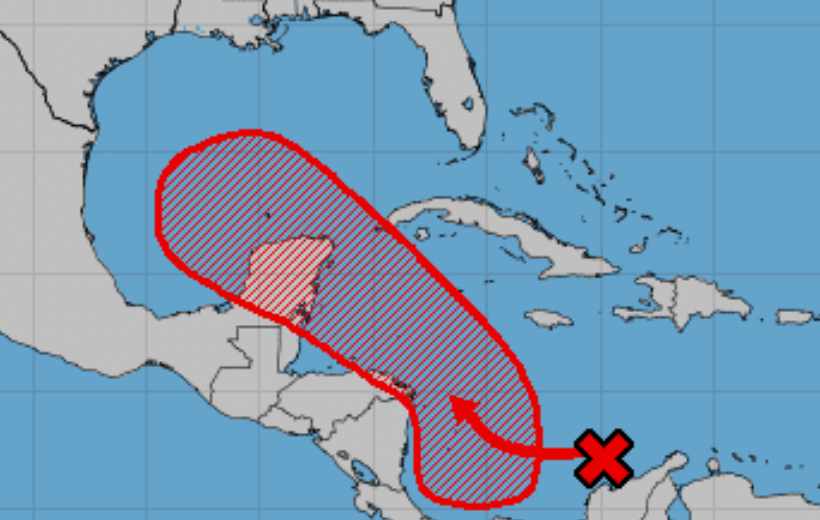 Original article: The disturbance in question is the area of investigation, or Invest 99L, which is currently in the far south central Caribbean and is forecast to head north and west towards the Gulf Of Mexico over the coming days.

Some of the forecasting and meteorology teams we follow are already highlighting 5 day plus model runs that show a hurricane, perhaps of major strength, forming and moving north through the Gulf of Mexico, with ramifications for the Gulf Coast anywhere from Mexico, through Texas, into Louisiana.

So a lot can happen in the meantime, but model scenarios showing a possible hurricane strength storm approaching the Gulf Coast suggest that insurance, reinsurance and ILS market interests will be watching this closely over the coming days.

Invest 99L may compete for a name with another disturbance in the Atlantic, as Invest 97L is also given an 80% chance of becoming a tropical storm within 5 days.

97L currently looks unlikely to present a threat to land, with the forecasts showing it curving northwards to the east of Bermuda and heading out into the Atlantic.

But still, these two disturbances have a strong chance of becoming tropical storm Ida and tropical storm Julian, with Invest 99L having a chance of adding another hurricane formation to the 2021 Atlantic tropical storm season statistics if the longer-range model runs prove accurate.

Invest 99L is the tropical disturbance of note for insurance, reinsurance and ILS market interests over the coming days.

Forecasters suggest it will track north through the Caribbean and either brush or cross Mexico’s Yucatan peninsula, before emerging over the Gulf of Mexico.

As ever, it’s important to highlight the uncertainties in the forecast, which range from the passage close to Central America and the Yucatan, which could weaken or disrupt the formation of a tropical storm, as well as longer-range uncertainties related to how strong an eventual tropical storm Ida or Julian could become over the Gulf of Mexico, plus uncertainty related to its eventual steering.

High pressure over the southeastern US will be a factor in the steering of this depression, storm or hurricane, as it moves north. The weaker the high pressure, or the further east it sits, the further east a track through the Gulf of Mexico may be.

That means, at this long-range stage of its life, forecasts suggest anywhere along the Gulf Coast is considered a possible area to watch for a storm or hurricane late this weekend or early into next week.

Forward speed is another uncertainty to factor in, as the disturbance is moving relatively quickly for now, but could slow later in its life, especially if it is fighting for position with this possible blocking area of high pressure.

On top of this, dry air is also said to be a potential inhibitor for development of this tropical system as it moves north, as there is an area of Saharan dust over the Caribbean which may play a role in the future of any storm. Shear could be another factor, although it is far lower now than a week ago and if a storm can form in the Gulf there appears a good chance of reasonably strong intensification, perhaps a chance it could be rapid.

Uncertainty aside, some model runs currently show a hurricane coming ashore somewhere from Texas to Louisiana on Monday or Tuesday of next week.

Meteorologists on social media are sharing model runs that show a possible major hurricane landfall scenario, with the Texas to Louisiana border area one location that a number of runs of the GFS model highlight as a potential region for concern.

Of course, all that depends on the numerous factors we mention above that make any forecast this far out lade with uncertainty.

Greater certainty should be gained over the course of this week and into the weekend.

If the stronger scenarios play out, the insurance, reinsurance and ILS industry may be on hurricane-watch again early next week.

In the nearer-term, this system could create a heavy rainfall threat for parts of Central America as it moves north over the next few days.

Insurance, reinsurance and ILS market interests can keep track of this activity once a named storm develops over on our 2021 Atlantic hurricane season page and we’ll update you should a more significant threat develop.