Update: See the latest forecast and information here. Forecast models continue to point to the possibility of a hurricane forming and impacting the United States, with landfall of what is likely to be storm or hurricane Ida possible along the Gulf Coast, somewhere from Texas to Louisiana, very early next week.

We highlighted this potential threat yesterday, detailing the situation that was possibly developing and also explaining the range of uncertainties that remained.

Update, Friday 11:00 BST: Our latest, on the growing chance Ida may become the first notable hurricane loss of 2021.

Update from Thursday evening: The NHC has just designated this system as tropical depression nine and there is a chance it becomes tropical storm Ida later today or tonight.

In it’s latest update the NHC has warned that, “Strengthening is likely over the Gulf of Mexico and the system could be near major hurricane strength when it approaches the northern Gulf coast.”

It’s also worth noting that even at this early stage in its life, this tropical system could be a significant rain-bringer, as the NHC warns of rainfall accumulations of 6 to 10 inches with maximum totals of 15 inches across Jamaica, with 8 to 12 inches with isolated maximum amounts of 20 inches for the Cayman Islands, western Cuba, including the Isle of Youth and the northeast portions of the Yucatan Peninsula.

That suggests there is already a lot of tropical moisture locked into this system, which could present a significant rain threat for the Gulf Coast region as it moves north this weekend.

The depression was officially named as Tropical Storm Ida later on Thursday, as expected.

Some of those uncertainties persist and there is still a way to go before we’ll know for sure what kind of threat this tropical disturbance is likely to pose, as a tropical storm or hurricane. But the forecast models are becoming more certain with each passing run.

Forecast models are converging to a degree, with many model runs now showing a reasonably strong hurricane landfall on the Gulf Coast, with eastern Texas across to the regions of Louisiana that were so badly impacted by hurricanes last year seen as particularly in the firing line.

The NHC has now upgraded the probability of the tropical disturbance becoming a storm, with a 90% chance this occurs in the next 48 hours.

Almost every forecaster or modeller we’ve spoken with is now expecting a strong tropical storm or hurricane in the Gulf of Mexico this weekend, with the uncertainty then about its eventual path and strength and whether it could pose a damaging landfall threat to insurance, reinsurance and ILS market interests.

The NHC warns that this system could potentially bring, “dangerous impacts from storm surge, wind, and heavy rainfall to portions of the coasts of Texas, Louisiana, Mississippi, Alabama, and the Florida Panhandle by Sunday and Monday.”

Also noting earlier today that, “Uncertainty in the system’s exact track and intensity remains large since the low is just beginning to form.”

There is a chance this system is upgraded to tropical storm Ida later today, or Friday latest. It still competes for that name (or Julian) with another system out in the Atlantic at this time, but it does appear Invest 99L, as this one is currently called, may stand the best chance of being named first and so become tropical storm Ida.

To get a little more clarity on the range of outcomes, we spoke with Richard Dixon, Head of Catastrophe Research at Inigo Insurance, a specialty global insurance and reinsurance underwriting firm.

Dixon shared this animated graphic, showing five forecast model runs with different hurricane landfall scenarios for the Gulf Coast, but all within a roughly 150km radius.

Dixon explained, “It’s important to remember that the system hasn’t developed yet and whilst various weather forecasts of the track seem reliable in this particular run of forecasts, this could change and “ensemble” output (multiple versions of the same model run with slightly different parameters) still suggests a wider spread around the western Gulf centred on Louisiana (see image below).” 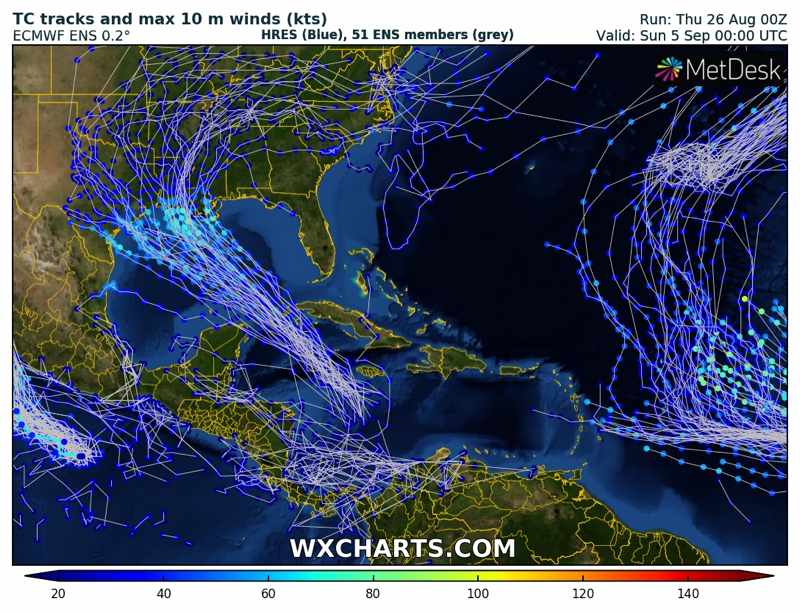 But Dixon also pointed out that uncertainty remains and a further east scenario cannot be discounted, “The trend in recent forecasts from the last couple of days has moved landfall eastwards along the Gulf through time so it’s possible that could also still continue.”

You can see that gradual eastward shift in the models over the last 12 runs, in another graphic shared with us by Dixon (below).

Finally, Dixon also stressed the continued uncertainty in the eventual strength of any storm or hurricane in the Gulf of Mexico, or at landfall, but also pointed to conducive conditions for intensification.

“The intensity is always a struggle to forecast but that said, the upstream environment of the system is one of slightly warmer-than-average sea temperatures capable of supporting a stronger system and also the forecasts are potentially suggestive of low wind shear which are also in its favour for development, provided it avoids traversing the mountains in western Cuba that can disrupt tropical systems and their development,” he explained.

Another meteorologist contact cautioned that the Gulf of Mexico’s warm temperatures do have the potential to rapidly intensify any well-formed storm or hurricane that makes it so far, so a strong eventual landfall scenario cannot be discounted and is something insurance, reinsurance and ILS interests need to remain alert of the potential for.

Intensity guidance from Tropical Tidbits can be seen below, which clearly shows that there are some models which anticipate storm Ida or Julian (whichever it is named as) strengthening into a major hurricane in the Gulf of Mexico and heading towards the coast.

The storm, or hurricane that forms, will track very close to eastern Cuba and also to the Cayman Islands, so these could also be areas where potential impacts or effects may be felt. The Yucatan peninsula of Mexico is also expected to be close to this storms path.

Should the storm that develops manage to thread its way between Yucatan and Cuba then it could stand a greater chance of reaching hurricane strengths quicker and so growing stronger, as interaction with either of those two areas of land could hinder development and influence the chances of intensity being stronger.

Also worth watching is where the center of the storm forms when it is officially named, as further east or west may influence the eventual track direction and the first forecast cones provided by the NHC.

But either way, the majority of models now focus on a strong tropical storm or hurricane in the Gulf of Mexico this weekend, with the only uncertainty beyond that being where it tracks, how strong it can become and exactly where it comes ashore.

Given the uncertainty in the model runs that presents an enormous range of scenarios for the insurance, reinsurance and ILS market to comprehend at this time, from a low-impact storm hitting a less populated region of coast, to a much stronger hurricane coming ashore somewhere coastal property values are much higher.

The next 24 to 48 hours will likely be critical in narrowing down the range of scenarios and identifying how much of a threat this tropical system could pose.

Hurricane Hunter aircraft are expected to investigate this system later today, meaning naming as storm Ida is possible, depending on the conditions they find at the time.

Insurance, reinsurance and ILS market interests can keep track of this activity once a named storm develops over on our 2021 Atlantic hurricane season page and we’ll update you should a more significant threat develop.