This morning, hurricane Ian has reached major Category 3 status and has strengthened further to 125 mph sustained winds, but more concerning for insurance, reinsurance and ILS market interests is the fact the forecast cone and track has shifted further east again, showing a landfall or very near pass to the Tampa Bay area.

The NHC’s forecast cone has shifted considerably over night, with hurricane Ian now set to pull up alongside, or even move ashore with a landfall, the Tampa Bay area with winds forecast to be as high as 120 mph at that time.

We’re still talking nearly 48 hours away before hurricane Ian puts itself into this offshore of Tampa Bay position and then decides whether it is heading ashore, or north towards the Florida Panhandle.

But, either way, after a new update this morning the models now bring a significant major Category 3 hurricane Ian very close to Tampa area, raising the prospects of catastrophic storm surge, winds gusting well over the 120 mph sustained that’s now forecast, plus in excess of ten inches of rainfall to what is a very highly populated, high-value and low-lying part of the Florida coastline.

First, the latest forecast cone from the NHC: Next, here is Tomer Burg’s forecast map for hurricane Ian, which shows the wind speed readings as well, which seems to show a 120 mph Tampa area landfall: 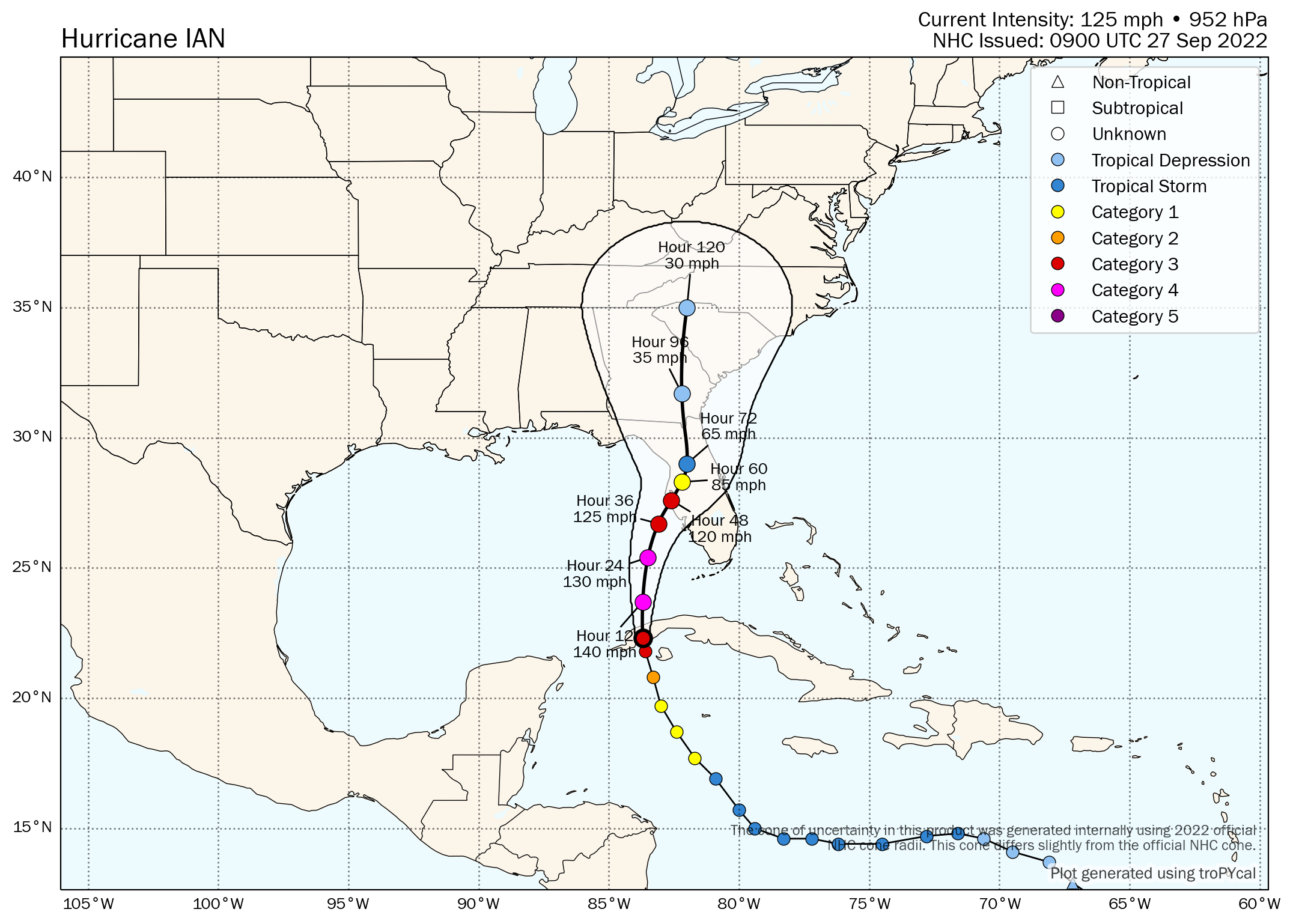 Finally, on the graphic front for now, here is the latest modelled intensity guidance from TropicalTidbits:

So, the latest forecast updates show a consensus for a very close passage of hurricane Ian by Tampa Bay, with sustained winds of perhaps 120 mph at the time it nears the area, which will push a significant storm surge ashore.

Tampa Bay is particularly exposed to storm surge, with a significant amount of low-lying property on the Gulf Coast shores, while inlets and the general shape of the coastline are ideally positioned to accentuate storm surge if water is pushed into them.

In addition, Tampa Bay area and the surrounding region, especially to the south, is a very high-value area of coastline, with significant property values at-risk.

CoreLogic said that its data indicates Hurricane Ian could threaten as many as 1,044,412 single-family and multifamily homes along the Florida gulf coast with storm surge impacts, which together have a reconstruction cost value (RCV) of approximately $258.3 billion.

“Due to Hurricane Ian’s slower speed and rapid intensification in the eastern Gulf of Mexico, the threat of a widening wind field bringing damaging storm surge increases each day,” CoreLogic explained.

Hurricane Ian’s steady shift east, bringing Tampa and the west coast of the Florida Peninsula back into the firing line, has got the insurance, reinsurance and insurance-linked securities (ILS) industry more concerned over the potential for a major industry loss event, it seems.

As we explained yesterday, hurricane Ian’s forecast path had shifted west, with a Panhandle landfall seen as most likely over the weekend, but gradually the forecast cone came back east again and now we find the latest maps showing a pretty similar solution to last Friday’s, a significant hurricane either making landfall around, or getting very close to, the Tampa Bay area.

It’s not surprising then to learn that the modelled loss estimates for hurricane Ian have been rising.

Yesterday, similar storms that if they occurred today could deliver an insurance and reinsurance market loss of up to $25 billion were being discussed.

Now, we understand that figure has been rising, with the forecast taking hurricane Ian ever closer to Tampa Bay and its surrounding area.

There’s still a particularly wide spread in modelled outcomes though, with everything from low single digit billions of dollars in losses, to $40 billion said to be on the table.

A worst case scenario of hurricane Ian taking the optimal angle of attack to push storm surge into Tampa Bay, or another highly populated region further south, while slowing on approach to rake the coastline and then heading across Florida to deliver a blow to the Orlando area as well, is said to have the potential to cause industry losses of up to or around $40 billion, one source has told us.

That’s a real worst case scenario, but also one that the latest forecast cone suggests wouldn’t be completely out of the question.

As we reported yesterday, catastrophe bond and ILS fund manager Twelve Capital said that its ILS portfolios could face a substantial loss, in a worst case hurricane Ian scenario, or no loss at all if Ian headed for a less populated area of the Panhandle.

The reinsurance broker said that the simulated losses across the four historical hurricane events ranges from a minimal loss in Gladys, to a range of $15 billion to $35 billion across the other three hurricanes.

Guy Carpenter’s analysis was undertaken while hurricane Ian’s track was still slightly further west, so now with the cone having moved further east to target Tampa Bay, it’s possible the modelled analogs could change, with perhaps even higher loss potential as well.

Model spread has lessened overnight as well, with a greater consensus emerging. But with hurricane Ian now set to slam western Cuba and pass over part of the country, the insurance, reinsurance and ILS industry will really need to wait and see how it emerges back over the Gulf of Mexico, regains structure, potentially grows in size, and how quickly it strengthens again as it begins to head for Florida.

The passage over western Cuba could also shift the track west or east again, so the Tampa solution is far from a given at this stage, with anything from further south on the western coast of the Florida Peninsula, to the Panhandle still seen as possible landfall locations.

But the models do favour Tampa Bay and the surrounding area, meaning that today this is expected to be the focus and likely the hurricane Ian solution that models will be run for and numbers be crunched.

It has to be stressed though, there remains enough uncertainty in the models and cone to say that hurricane Ian could still deliver anything from a negligible industry loss in the hundreds of millions, to low billions of dollars, right the way up to the $30 billion or even $40 billion mark, perhaps more for an absolute worst case landfall.

There is still a chance dry air and wind shear hinder hurricane Ian if it tracks further north up Florida’s west coast. Conversely though, a further south passage towards the coast could mean an even stronger hurricane landfall, it seems.

Which continues to make it very challenging for anyone to predict the exposure for their particular portfolio, with any significant degree of accuracy, which will also be hindering any live cat trading activity from getting started and once hurricane Ian passes Cuba it may be too late, as greater certainty may emerge.

A word on Cuba. The western region stands to be slammed by strong Category 2 hurricane Ian in the coming hours, with winds of 125 mph and higher gusts up to 140 mph, plus a potentially life threatening storm surge of more than 10 foot and inches of rainfall.

Storm surge forecasts are already focused on Florida, with up to 10 feet currently predicted for the Tampa Bay area. Here’s the latest peak storm surge graphic from NOAA. That’s a number that may rise once Ian gets into the Gulf of Mexico and strengthens again, with the storm likely to grow in size as well, raising the storm surge potential.

But for now, all thoughts must be with those in Cuba who face the wrath of hurricane Ian first.