Hurricane Ian continues to head north west through the Caribbean, intensifying steadily and still expected to become a major hurricane as it enters the Gulf of Mexico, before heading generally north with the forecast models showing a major Category 4 hurricane Ian offshore of Tampa Bay late Wednesday night into Thursday morning.

But significant uncertainty remains, as the forecast track continues to shift around with model run updates, having moved from a major hurricane landfall south of Tampa last Friday, to a landfall high in the Florida Panhandle over the weekend and now coming back closer to the Tampa solution, or just north of that area of the west coast of Florida.

All of which is making it incredibly hard for anyone to project the eventual insurance, reinsurance and ILS or catastrophe bond market losses from hurricane Ian.

The latest forecast map and cone, via Tomer Burg’s excellent website, can be found below: 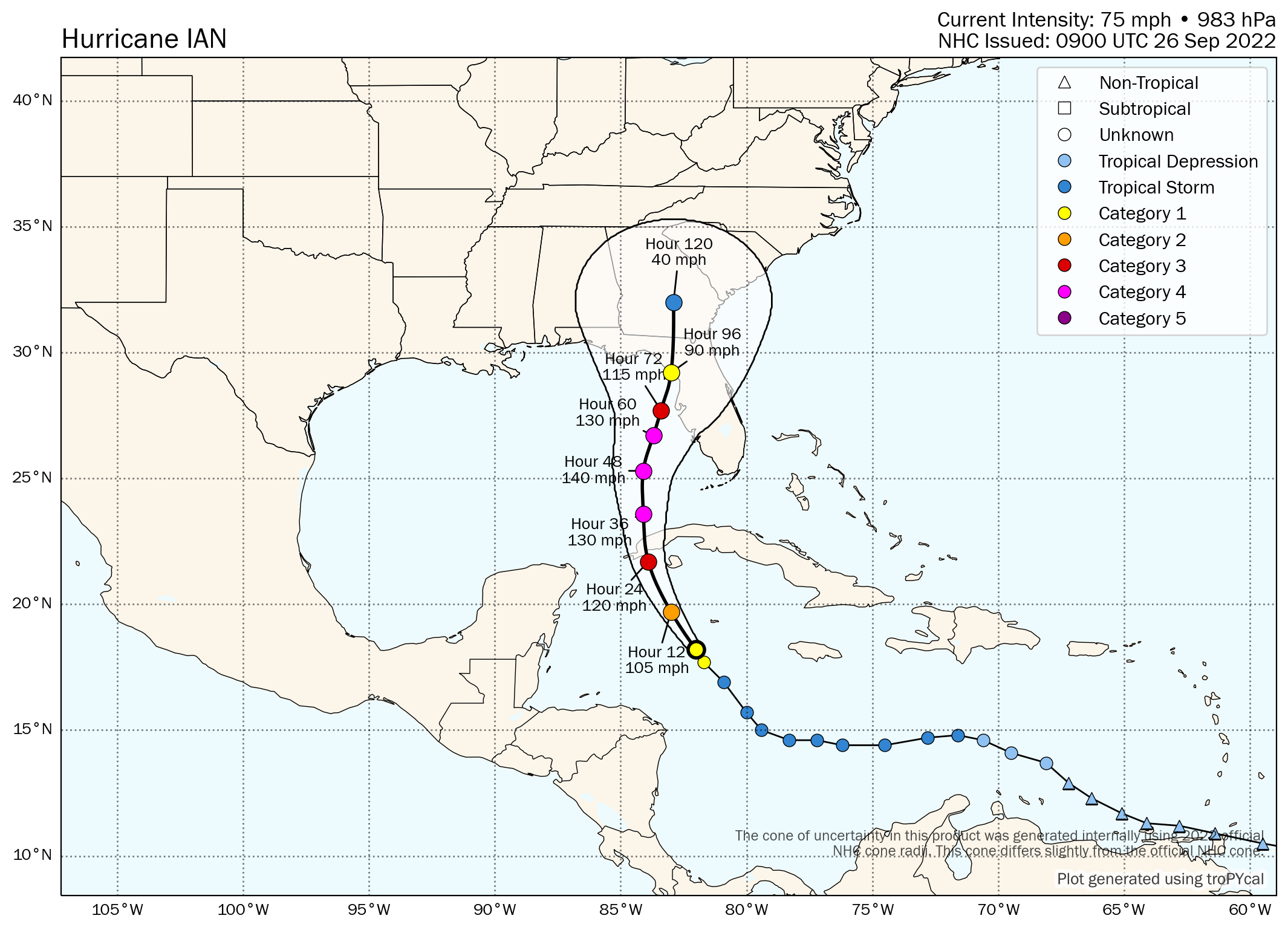 As we’ve been explaining, the modelled loss scenarios we’ve seen are indicating anything from an industry loss in the hundreds of millions, to one in the tens of billions of dollars.

With such a wide range of potential outcomes, it’s making it very hard for any hedging to occur, so the live cat market appears at a stalemate of sorts, according to brokers we’ve spoken with.

ILS fund manager Twelve Capital drives this high level of uncertainty home in its latest update on the storm.

“Depending on where Ian makes landfall and at what strength will have a large impact on the amount of damage caused,” Twelve Capital explained.

Adding that, “An impact on densely populated areas of Florida, such as in the Tampa region, would cause significant industry losses and would very likely also affect our ILS portfolios to a substantial degree.

“On the other hand, a landfall in the panhandle region further north would significantly reduce the risk to the industry and to ILS portfolios, with the possibility of not seeing any impact at all in our funds.”

Right now, the forecast models suggest hurricane Ian will be at major Category 4 strength as it pulls up alongside the Florida west coast somewhere from Cape Coral to Tampa Bay.

At this stage, the center of the hurricane could be just a hundred miles or less offshore, and this is where some of the forecast models now suggest a stall from hurricane Ian.

Should hurricane Ian stall offshore of Tampa, but closer in to land, it could result in a significant surge event, so that is a scenario that would have a higher industry loss attached. So too would a direct landfall somewhere in the region of Tampa, or any further south, with double-digit billion dollar losses easily possible from such a scenario.

However, the models are suggesting a slow passage north along the Florida coast, towards the eastern end of the Panhandle, weakening as it goes. It must be stressed just how uncertain this all remains though and hurricane Ian could just as easily rake hundreds of miles of prime Florida coastline with hurricane force winds and storm surge, as it could come ashore in a relatively low-population Panhandle location.

All of which boils down to massive uncertainty in the eventual market loss, as Twelve Capital suggests, for the insurance-linked securities (ILS) industry, hurricane Ian could be anything from a substantial ILS market loss to near nothing, depending on how the next few days pan out.

The market is unlikely to have any greater certainty in the eventual outcome until hurricane Ian has passed Cuba by later on Tuesday and intensified to the expected major hurricane status. At that time some more certainty may exist in the forecasts and we could have a better idea of the eventual path hurricane Ian follows towards Florida.