The lower-risk cohort of UCITS catastrophe bond funds has again seen the strongest gains in the last week of record to December 9th, according to the latest data from the Plenum CAT Bond UCITS Fund Indices, while overall the Index is now only down around 2.80% year-to-date.

It seems lower-risk catastrophe bond fund strategies have had some ground to regain in recent weeks, likely after the week that this cohort of funds fell further than their higher-risk counterparts.

Having fallen slightly a week earlier, the Plenum calculated UCITS catastrophe bond fund indices gained an average of 0.17% in the week to December 9th 2022, the last reported data available for this group of cat bond funds.

The lower-risk UCITS cat bond funds performed best in the last week of record, delivering a positive return of 0.23%.

The group of higher-risk UCITS cat bond funds were also positive for the week, but only delivered a 0.13% return.

These movements speak both to the fact the lower-risk funds had a little ground to recover, but also to the fact price volatility in the secondary cat bond market has been highest for names with a higher coupon lately, particularly those with hurricane Ian exposure.

You can see the performance of the Plenum CAT Bond UCITS Indices below (click the image for an interactive chart): 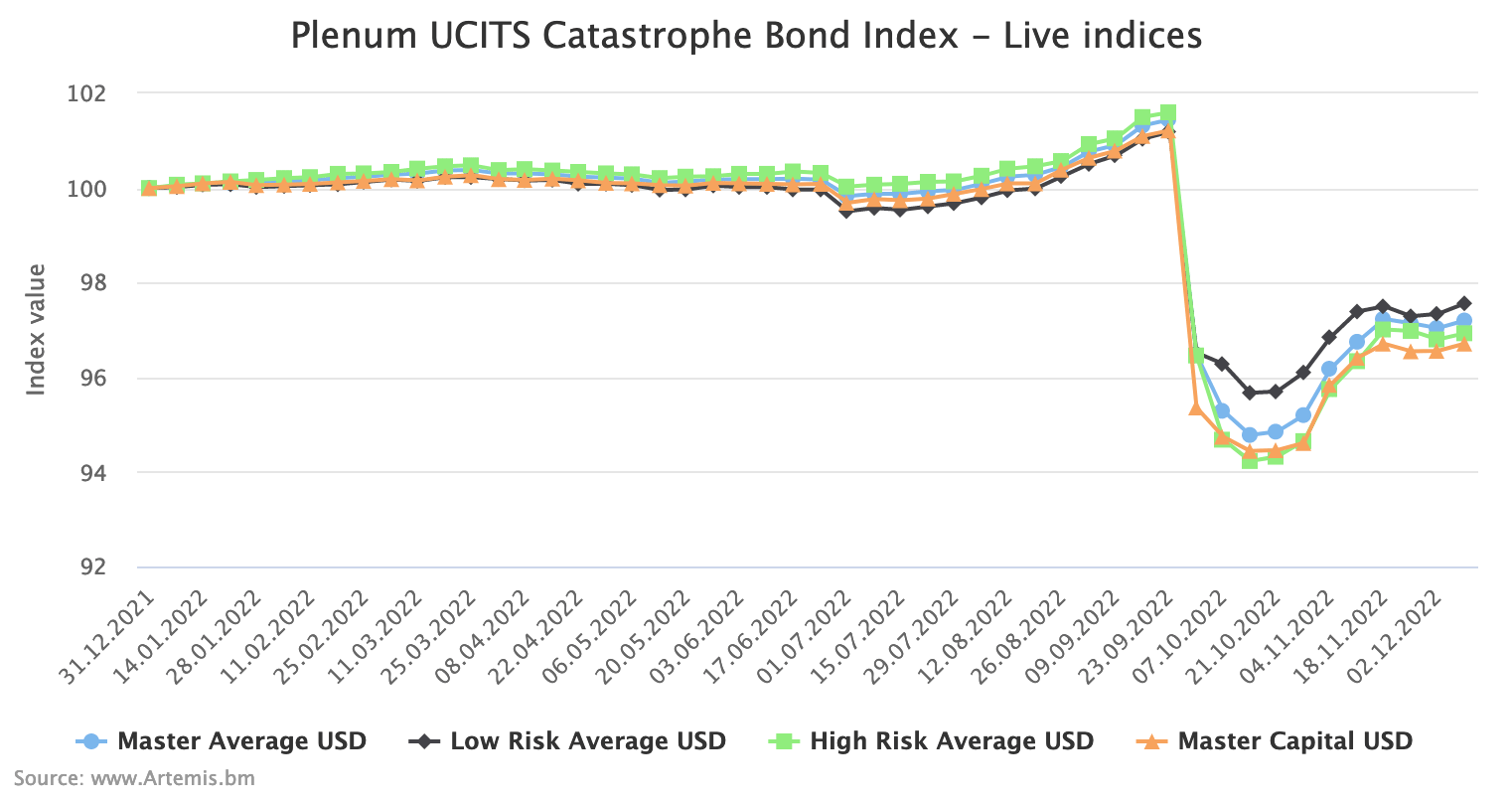 There is also a strong chance that differing valuation strategies, among cat bond fund managers, could also be in-play here as well as the fluctuation of the market.

Some cat bond fund managers mark their books at mid-spreads, or the average across pricing sheets, or based on a particular broker’s marks. As a result there can be some small weekly discrepancies that tend to even out over time.

As of December 9th, the average decline of the UCITS cat bond fund indices since hurricane Ian’s landfall in Florida is now -4.19%.

These cat bond fund indices had seen a decline of as much as -6.58% on average, immediately in the wake of major hurricane Ian’s impact on Florida.

As of December 9th, the Plenum cat bond fund index was roughly -2.80% down year-to-date, on average.

That’s perhaps a surprisingly small decline in a year when a major hurricane made landfall in Florida, which shows that despite major events like Ian, the cat bond market is robust and diversified portfolios of cat bonds can often fare better than anticipated when major catastrophes occur.

After this latest weekly gain, the high-risk cohort of UCITS cat bond funds are down 3.07% year-to-date, while the lower-risk group of funds are down 2.44%, as of December 9th 2022.