Louisiana Citizens Property Insurance Corporation has reported an estimated loss from hurricane Ida of around $461 million, but thanks to its low retention on its reinsurance tower and its catastrophe bonds, the residual market insurer will only retain $35 million.

At a Board meeting held last week, Louisiana Citizens staff updated on the anticipated gross impact from hurricane Ida’s assault on the state in September.

At this stage, they forecast gross losses from hurricane Ida rising to around $461 million, which would mean the two per-occurrence layers of its outstanding catastrophe bonds will suffer a total loss.

As we’ve explained before, the two outstanding per-occurrence catastrophe bond tranches sponsored by Louisiana Citizens had already been marked down significantly by secondary cat bond brokers.

As ever, it depends what broker pricing sheet you look at though, with some already having both these tranches marked for bids of 1 cent.

But it looks like are definitely set to both go to zero, in terms of valuation, as Louisiana Citizens’ projected hurricane Ida loss will eat right the way through the reinsurance protection they provide. 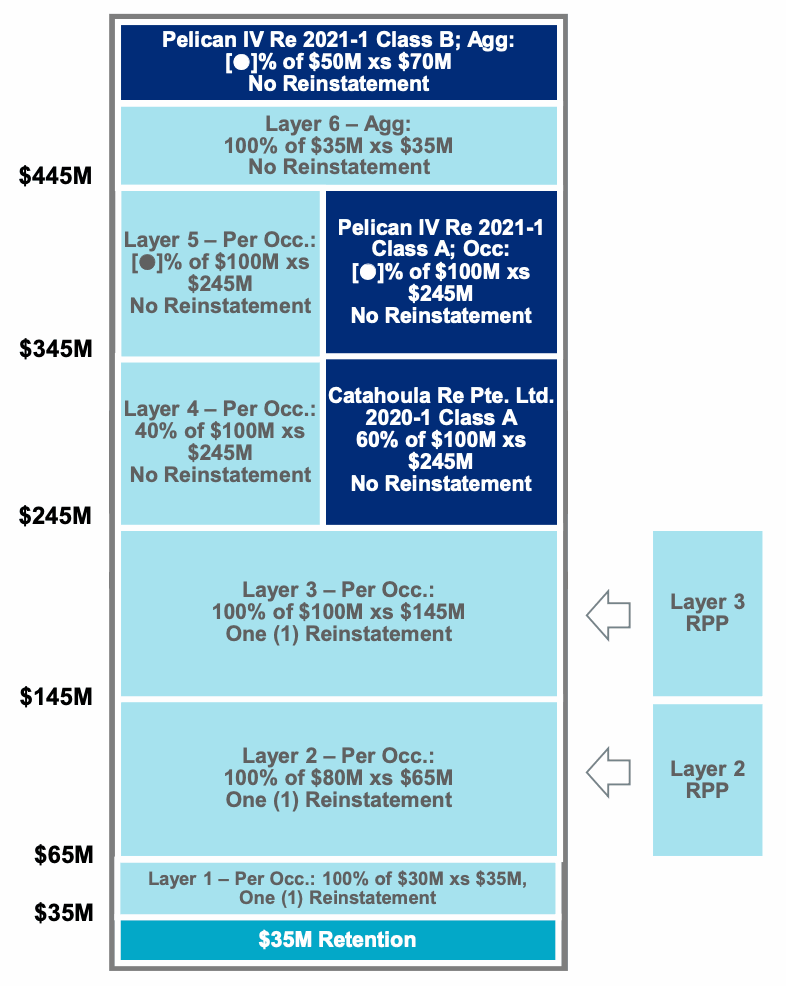 At its latest estimate, Louisiana Citizens will recover somewhere around $426 million from its reinsurance partners and catastrophe bond investors.

You can see the LA Citizens reinsurance tower to the right.

It shows the $35 million of retained losses, after which losses from hurricane Ida will have eaten through $210 million of protection from three reinstatable per-occurrence layers of traditional reinsurance.

Above that sits the two per-occurrence catastrophe bond tranches, now assumed to be total losses.

The cat bonds provide $135 million of cover and sit alongside traditional reinsurance protection that they share a $200 million layer of the program with.

Above the per-occurrence layers sits aggregate reinsurance protection, with the annual aggregate layer of the Pelican IV Re cat bond sitting right at the top and as yet untouched.

Louisiana Citizens will be back in the reinsurance and likely catastrophe bond market in 2022, as it seeks to replenish its reinsurance protection in advance of next year’s hurricane season.

The Board of Louisiana Citizens also heard at their recent meeting that the residual market, or insurer of last resort, is expecting to grow its total insured values over the coming year, with a forecast for another 5,000 policies to be picked up and concerns that struggling private insurers could pass even more to them.

All the while LA Citizens has been trying to depopulate, but like its Florida Citizens counterpart growth has resumed and the challenged coastal and catastrophe exposed property insurance market continues to demonstrate the need for these carriers.

Which makes their access to efficient reinsurance capital all the more important, so we can expect to see them continue to leverage the catastrophe bond as a way to tap into capital market investor appetite for uncorrelated sources of risk-linked returns.

You can view details of many catastrophe bond defaults and losses in our Directory.