Typhoon Jebi’s impacts on the global insurance and reinsurance market is already above the 1-in-40-year loss level, according to estimates from S&P Global Ratings, who also warn that further material developments cannot be ruled out.

Typhoon Jebi will account for more than 15% of the top-20 global reinsurance firms catastrophe budgets, S&P believes, reflecting the severity of the event and the hit to reinsurer earnings it has delivered.

As we explained in previous articles, typhoon Jebi has delivered surprises on many fronts, from the escalation of the loss from a single digit billion industry event to a near $15 billion industry loss, the fact that almost the entire industry did not see the loss creep coming and went along with early modelled estimates, to uncertainty surrounding ILW’s, to the triggering and expected full payout of one exposed catastrophe bond transaction.

It’s been a challenging situation and this is expected to continue until the loss settles and finalised estimates are released, but rating agency S&P warns that ongoing loss creep cannot be completely ruled out.

“Although the top-20 global reinsurers will likely be able to manage Jebi’s loss creep, further material developments could yet occur,” S&P said.

Having become the most costly Japanese typhoon ever for the insurance, reinsurance and insurance-linked securities (ILS) industries, typhoon Jebi has had a greater effect on reinsurers’ earnings in 2019 than in the year the storm actually occurred (2018) thanks to the loss creep.

S&P explained, “We already expect it to represent more than 15% of their catastrophe budget and estimate a return period of more than 1-in-40-years for the event.”

The chart below demonstrates this, showing that in the aggregate typhoon Jebi is more than a 1 in 40 year loss for the top companies in reinsurance, but it also shows that the loss has been much more significant for some. 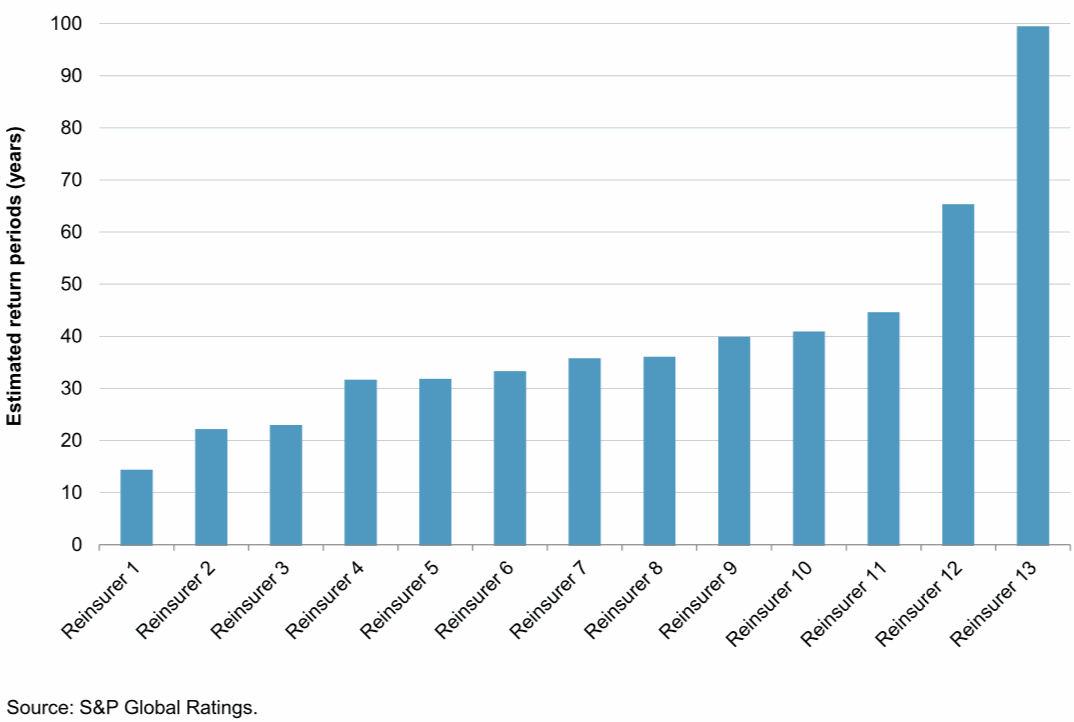 “Jebi is an important reminder of the significant uncertainty associated with early loss estimates,” S&P said.

The rating agency went on to warn that recent history has shown the impact of loss creep, as 2017 hurricane Irma and now Jebi have shown.

“If the industry were to experience a mega event, beyond $50 billion loss, the risk and uncertainty stemming from substantial loss creep could be significant. A risk that we think the industry should better prepare for post an event.”