Issuance of insurance-linked securities (ILS) and catastrophe bond transactions during the third-quarter of 2016 remained strong, bringing the market back to growth after a sluggish Q2. With investors keen for peril diversification, there could be a pricing advantage for non-U.S. exposures, according to Munich Re.

The catastrophe bond and ILS market recorded solid growth in the third-quarter of 2016; with reinsurance giant Munich Re noting that it was one of the market’s most active Q3’s since its inception, a point also highlighted by the Artemis Q3 Catastrophe Bond & ILS Market Report.

It’s worth noting here that our numbers will differ slightly from that of Munich Re with regards to catastrophe bond and ILS issuance, owing to the inclusion of certain privately placed transactions.

The reinsurer explains that in more recent years issuance for Japanese perils has been on the rise, although the outstanding market size is still dominated by U.S. wind and earthquake deals.

“This is mainly driven by a decline in Europe wind issuance since 2013, a peril class which prior to that had provided ILS investors with a continuous source of diversification,” said Munich Re. 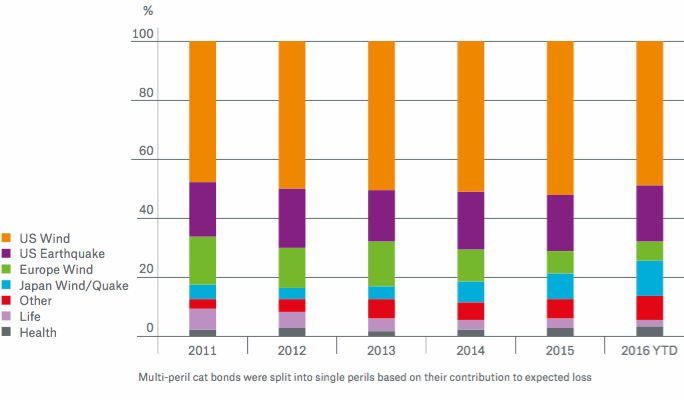 Interestingly, in its latest ILS market report, Munich Re explains that the overall share of diversifying ILS perils has stayed at approximately 35% since 2011. Furthermore, the reinsurer predicts a “continued advantage in pricing for non-US exposed transactions, with investors keen on further diversification.”

Issuance of catastrophe bond and ILS deals have largely focused on the U.S. property catastrophe arena, exacerbating the competitive nature of the space and contributing to persistent pressure on rates in the sector.

It’s expected that the ILS space will continue to expand and look to play a role in more regions of the world and protect against a broader range of perils, something that will require continued investor appetite and innovation from the sponsor end.

Zenkyoren is a common name in the cat bond space, as shown by the Artemis Deal Directory, and deals from Tokio Millennium Re AG and Sompo Japan and Nipponkoa Insurance Company have also brought Japanese risk diversification to the space.

Furthermore, Panda Re Ltd. (Series 2015-1) from China Re in 2015 saw Chinese earthquake risk come to the market for the first time, underlining the potential for ILS to expand its reach and scope.

Owing to the diversification benefits and low-correlated nature of an ILS investment for the institutional investors that participate in the space, and despite returns being lower in the current environment, capital markets investors appear more than willing to assume the business, whether exposed to the U.S., Europe, or elsewhere.

But as highlighted by reinsurer Munich Re, non-U.S. exposed perils will likely experience an advantage in pricing, as investors are always eager for further diversification where possible, highlighted by the success of deals in Japan and China, as mentioned earlier.

It will be interesting to see what regions and perils the ILS market looks to expand to, and whether deals like Panda Re encourage greater issuance for Chinese risks, and whether any other emerging markets in parts of Asia, Africa, and elsewhere around the world, look to utilize the ILS space for risk transfer needs.