The Insurance Council of Australia (ICA) has reported that estimated insurance industry losses from damages caused by floods in Queensland alone have now exceeded $1.1 billion, while claims from New South Wales increased by 18% on yesterday’s figure.

The claims count from the severe flooding in the Southeast Queensland and New South Wales areas of Australia continues to rise, with total claims across both states at 118,016 as of March 10th, which is a 9% increase on yesterday’s figure.

In Queensland, a 5% rise in claims has taken the total here to 73,823, resulting in an estimated insurance industry loss of $1.107 billion. In New South Wales, the ICA has recorded an 18% rise in claims to 44,193, which translates to an insured loss estimate of $663 million.

Across both states, the ICA estimates that the storms and floods have generated an insurance and reinsurance industry loss of $1.77 billion, which is up from the $1.62 billion reported by the ICA yesterday.

Of the total claims across both regions, property accounts for the most at 81%, followed by motor at 16%, and then other at 3%.

The chart below, provided by the ICA, compares the current flood disaster versus last March 2021 which was ultimately seen as around an A$751 million event by PERILS AG, and another comparable cat event in the far north Queensland area, which was a roughly A$1.2 billion insurance industry loss. 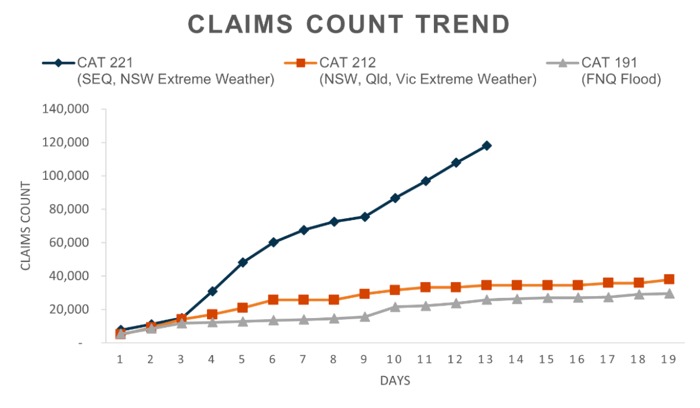 Andrew Hall, Chief Executive Officer (CEO) of the ICA, commented: “The Insurance Council welcomes comments by Prime Minster Scott Morrison yesterday that the Federal Government will focus on investing in infrastructure to make communities more resilient to extreme weather events like this flood.

“The Insurance Council and insurers have been calling for an increase in Federal Government investment in this area to $200 million per year, matched by the states and territories. We have previously welcomed commitments also made by the Federal Opposition to increase this investment.

“Last month we released our Building a More Resilient Australia election platform and a supporting report from actuarial consultants Finity which highlighted Lismore as one of nine locations in need of urgent flood mitigation infrastructure.

“This infrastructure and mitigation investment is vitally important to prevent future harm and devastation to these communities, as we know flood events will inevitably repeat.”

As reported by our sister site Reinsurance News, state and federal MPs representing flood-affected communities in Australia have called for the planned commonwealth cyclone reinsurance scheme to be expanded.

The current model is backed by a $10 billion government guarantee, and aims to protect more than 500,000 properties in the path of cyclones and cyclone-related flooding in the country’s north.

Early estimates suggested that the re/insured loss from the storms and floods could reach towards $2 billion, with reinsurers poised to assume the majority of the losses with primary insurers already reporting that they expect to make recoveries.