Australian primary insurance group IAG has completed a 2022 renewal of its main catastrophe reinsurance tower, keeping the amount of coverage it has flat at $10 billion, while the cost of the reinsurance program increased by mid-single digits.

IAG’s reinsurance tower provides gross protection for catastrophe losses of up to $10 billion, including a single prepaid reinstatment.

The insurer will retain the first $250 million of losses in each case, which is the same amount as the prior year and again, like 2021, IAG’s catastrophe reinsurance arrangement features second and third event drop-down covers of $50 million each, which lowers the cost of additional loss events to $200 million for the company.

Also the same as the 2021 program, IAG has again secured three prepaid reinstatements for the lower layer, that provides $250 million of cover attaching at $250 million, to enable it to replenish losses at the level most likely to be suffered through the calendar year. 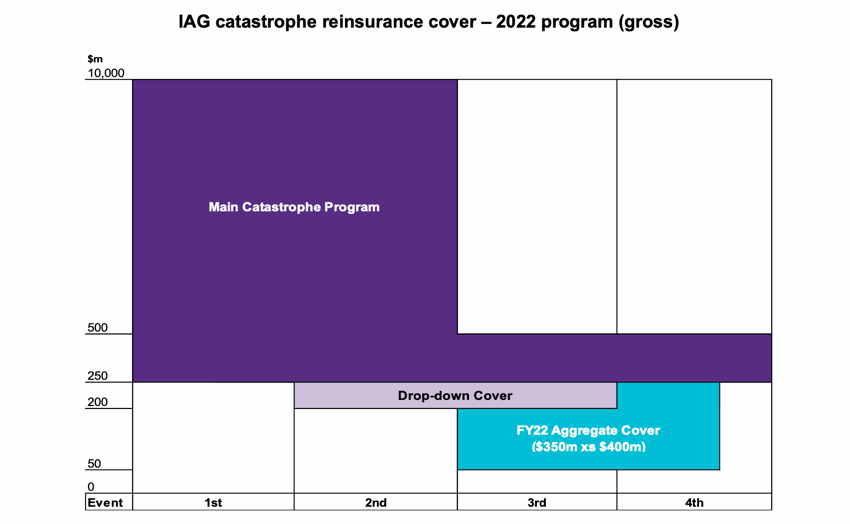 IAG’s Chief Financial Officer Michelle McPherson commented, “Our catastrophe reinsurance program remains an intrinsic part of IAG’s capital management strategy. The structure of the new program is similar to that of prior years, and we received strong support from our reinsurance partners with whom we have long-term relationships.”

Cost increases were in-line with IAG’s planned assumptions, the carrier said, only revealing that overall the reinsurance renewal saw pricing rise in the mid-single digits.

One change to the prior year and perhaps also a reflection of the rising cost of reinsurance and more onerous terms, is that for 2022 IAG only has 60% of the tower placed on a multi-year basis, where as a year ago it was said to be roughly 65%.

Another change is that for 2022 over 90% of the reinsurance tower has been placed with A+ or better rated reinsurers, where as it was nearly 90% for 2021.

That suggests there is likely still some collateralised participation in the remaining limit, but that the majority of ILS fund capital playing a role has likely been deployed on a rated or fronted basis in IAG’s reinsurance program.

IAG’s reinsurance arrangements also include its aggregate sideways cover, that runs across the 12-month period to 30 June 2022.

Having experienced severe weather and catastrophe loss activity so far in that annual term for the aggregate reinsurance, this cover now provides IAG $350 million of protection in excess of $90 million now, as roughly $310 million of the $400 million deductible had been eroded during the six months to 31 December 2021 ( before accounting for the quota share).

After taking IAG’s quota share arrangements into account, its catastrophe reinsurance at 1st January 2022 results in the insurer only having a maximum event retention of $95 million.