The recent severe wildfire outbreak that was named the Marshall Fire and impacted residential areas in Boulder County, Colorado, has been estimated as around a $1 billion insurance industry loss, by risk modeller Karen Clark & Company. 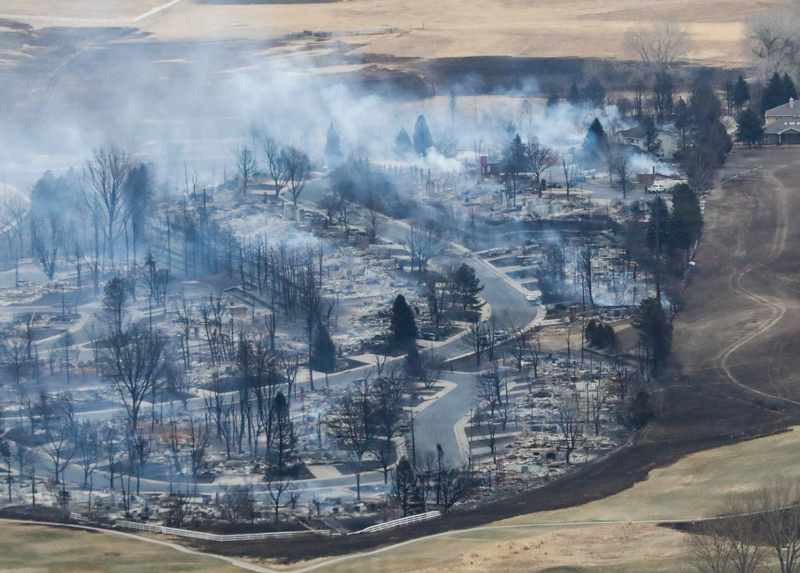 We explained earlier this week that with around 1,000 properties destroyed and more damaged by the Marshall Fire, there was a strong chance insurance and possibly reinsurance market losses would hit a record level for Colorado.

As we explained in that earlier article, the previous most costly Colorado wildfire resulted in around $560 million in insured losses, in 2021 dollars, which suggested that the Marshall Fire could drive insurance market losses approaching $700 million, or even higher.

As ever, Karen Clark & Company (KCC) is the first to offer a formal industry loss estimate, having run its models over the wildfire event and analysed the potential costs to the insurance and reinsurance industry.

The Marshall fire burned approximately 6,000 acres and devastated entire subdivisions throughout Superior, Louisville, and unincorporated Boulder County, Colorado. The Boulder County Sheriff’s Office has reported nearly 1,000 structures destroyed and over 100 damaged as of Tuesday, though damage assessments are still ongoing. A breakdown of the current damage totals by location is as follows:

The majority of damage occurred in Louisville, a suburban area about 20 miles northwest of Denver. Hundreds of homes and a large commercial area, including a shopping center and a hotel, were among the destroyed structures.

Using its high-resolution KCC US Wildfire Reference Model to analyse this recent event, KCC said that it estimates the insured losses from the Marshall Fire will be around $1 billion.

KCC also highlights the fact that these downslope wind events are not actually that unusual in Colorado, but this particularly one sparked blazes due to the tinder dry state of the environment after a prolonged warm and dry spell in the region.

The wildfire broke out on December 30th, so will add to losses from the 2021 catastrophe year.

At around $1 billion in size, the industry loss should be largely retained in the primary insurance market, with little impact to reinsurance capital.