The impact to insurance and reinsurance interests from the wind and storm surge damage caused by hurricane Florence is estimated to be in a range from $1.7 billion to as much as $4.6 billion, by AIR Worldwide. 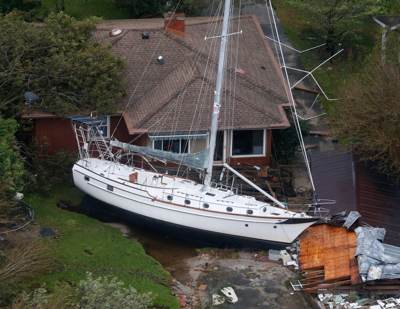 The catastrophe risk modeling firm said today that industry insured losses from hurricane Florence’s winds and storm surge could reach as high as $4.6 billion, but this will not be the total insurance and reinsurance market loss as it does not include any estimate of the ongoing flooding event caused by precipitation from the storm.

“Hurricane Florence, once a Category 4 storm, made landfall near Wrightsville Beach, North Carolina, at about 7:15 a.m. on Friday, as a Category 1 storm with 90 mph winds,” commented Dr. Peter Sousounis, vice president and director or meteorology, AIR Worldwide. “As Florence approached the East Coast, it grew in size and exhibited multiple wind maxima, which are found in storms with abnormally low central pressure for a given maximum wind speed. As a consequence, strong winds extended well north of the landfall location up to the Outer Banks and into Pamlico Sound, which caused a high storm surge in this area.”

AIR noted that the slow movement of Florence has ensured that the main impact will be from precipitation induced flooding, however storm surge will be a component of the insurance and reinsurance market loss, with up to 10 feet recorded in coastal North Carolina.

AIR said that wind damage in the affected area has been seen to be consistent with that of a Category 1 hurricane, including downed trees causing damage to homes and automobiles, downed utility poles, and shingle loss on roofs, with isolated cases of more extensive roof damage.

The size of the loss estimate reported by AIR confirms suspicions that the primary market will retain the bulk of the loss from hurricane Florence, with only a relatively small amount falling to reinsurance markets and some ILS funds or collateralized vehicles and retrocessionaires.

AIR explained what is in and what is out of its early estimate of the insurance market loss from hurricane Florence: