The ongoing severe flooding in Houston, Texas and the surrounding area, is being likened for severity to 2001’s tropical storm Allison, a storm which was predominantly a flooding event but resulted in more than $7 billion of economic losses and an insured loss estimated at $3.5 billion. 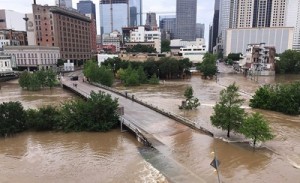 The Houston area of Texas has been hit by more than 20 inches of rainfall in recent days, as a slow-moving weather system dumped rain to the north and west of the city, resulting in severe flooding to residential and commercial areas of the city. 17.6 inches of rain were recorded in Houston on Monday alone.

Additionally, torrential rainfall to the east of Austin has caused the Colorado river to rise by an additional 25 feet, causing further moderate flooding in that region of Texas.

After a short break in the rainfall today, Tuesday, Texas is expected to face further downpours over the following couple of days, which could exacerbate the flooding and cause further damage.

The flooding rains come on the heels of a series of damaging hail storms and periods of severe convective weather, which are thought to have caused from $1.3 billion to $2 billion of insurance and reinsurance industry losses.

The flooding in the Houston, Texas area is being likened to 2001’s tropical storm Allison, a storm which only had sustained winds of around 50mph but still managed to cause a $3.5 billion insurance and reinsurance industry loss, according to the Insurance Council of Texas, becoming Texas’ most costly weather loss at the time.

The recent flooding appears more localised than that seen with Allison, however the amount of rain in the Houston area and the height of the flooding has been comparable in some locales.

At least 1,000 residential properties are said to have been flooded, with that number expected to rise considerably. There are reports of major international companies having to shut down offices in Houston, due to flooding which could raise the prospects of some business interruption claims.

Insurance claims rates from flooding can be much lower than with other catastrophes or weather events, due to low penetration of flood insurance and low uptake of the National Flood Insurance Program (NFIP) policies.

However, looking back at tropical storm Allison in 2001, which on estimates of economic loss (which range $7bn to $8bn) versus the insurance industry loss estimate of $3.5 billion from the Insurance Council of Texas, it appears that around 50% of the economic impact of that event was covered by insurance or reinsurance.

15 years later it would be expected that insurance penetration rates would be a little higher, at least, so this ongoing flood disaster in Texas looks like it could result in as much as a billion dollar loss for the insurance and reinsurance industry.

As Texas has been so badly hit by severe weather this year the insurance industry losses in the state are rising. That increases the prospect of aggregate catastrophe reinsurance layers coming into play and also raises the prospect that some ILS fund managers may face small impacts due to these events in Texas threatening collateralised reinsurance contracts.

However it remains the expectation that any impact to ILS funds or indeed to reinsurance sidecars, due to the recent hail and now this flooding event in Texas, would be minimal. But the potential for some impact due to loss events in Texas is growing all the time.

Overview
Record rainfall prompted extensive flash flooding across parts of Texas on Monday, leading to more than 1,220 water rescues in the greater Houston metropolitan area alone. At least five fatalities were blamed on the floods. Rainfall rates fell at up to 4.00 inches (101.6 millimeters) per hour at times as rivers, creeks and bayous rapidly burst their banks and overtopped levees. Significant flood damage was noted in Harris County as officials urged residents to stay home and avoid commuting on area roadways. All schools and city offices were closed. The city of Houston and Harris County was declared a disaster as local officials described the event as a “life-threatening emergency”. The governor later declared a disaster for nine affected counties in southeast Texas.

Meteorological Recap
NOAA’s Weather Prediction Center (WPC) and local National Weather Service (NWS) offices started forecasting the risk of a major rainfall event in eastern Texas on April 15 as the forecast computer models started to become better aligned. As the calendar reached April 17, atmospheric features began to come together that confirmed the likelihood of such an event unfolding. The primary driver of the event was a large upper level area of low pressure located over the Rocky Mountains, plus a stalled jet stream. This low helped bring considerable moisture across the southern Plains and Lower Mississippi River Valley. At the surface, a nearly stationary frontal boundary was draped from the Dakotas into south Texas. As these two components came together, it set the stage for dramatic rains and flooding.

For additional background, when a frontal boundary is slow-moving, it can often help warm and moist air to rise. As this air rises into the atmosphere, it cools and condenses into clouds that produce precipitation. In the instance on April 18, onshore winds from the southeast were interacting with air behind the front that allowed the boundary motion to remain stationary. This caused a near constant band of developing heavy rain and thunderstorms to traverse over the greater Houston metro region for more than six consecutive hours.

As the day unfolded, the local Houston/Galveston NWS office declared a rare Particularly Dangerous Situation (PDS) Flash Flood Emergency for parts of Harris, Colorado, Waller, Austin, and Fort Bend counties as rainfall rates of 2 to 4 inches (51 to 102 millimeters) per hour fell. This prompted rivers to exponentially increase in a matter of hours. The White Oak Bayou station at Houston rose from 8.30 feet (2.53 meters) at 02:45 UTC to 36.95 feet (11.26 meters) at 19:30 UTC. Given the gauge stopped recording heights for a seven-hour period from 11:45 to 18:45 UTC, it is possible that the water height was even higher.

The rainfall at Houston Intercontinental Airport – 11.75 inches (298.5 millimeters) – on April 18 set the all-time daily record for the city of Houston. In fact, this record was broken before 10:00 AM local time.

Elsewhere, heavy rains from the broad event also led to isolated flooding across parts of Oklahoma, Kansas, and Nebraska.

With the frontal boundary not expected to move much during the next 24 to 48 hours, the WPC forecast that an additional 2 to 4 inches (51 to 102 millimeters) of rain was possible in southeast Texas. Flash flooding was also possible in eastern Oklahoma, northern Texas, and the Lower and Middle Mississippi Valley.

Event Details
The most considerable damage was recorded in Harris County, Texas, where local officials reported that more than 70 neighborhoods and subdivisions in the greater Houston metro region were inundated by multiple feet (meters) of water. Multiple levees were overtopped that turned streets into rivers. A preliminary tally suggested that a minimum of 1,000 homes were damaged, though it is expected that the final total will be far higher. Even more businesses and other public facilities were damaged. Impacts were particularly significant in the Greenspoint area, where people at more than 1,500 residential units were stranded in multi-level apartment complexes. The Meyerland region was also heavily affected.

At its peak, more than half of the watersheds in Harris County – 13 of 22 creeks and waterways – experienced significant flooding as typically small flowing creeks and streams turned into raging torrents. More than 1,220 water rescues (897 in Houston city limits and 325 elsewhere) were conducted by emergency officials, many of which were via boat since water levels were too high or fast-flowing for vehicles to navigate. At least five people were killed, with nearly all of the fatalities resulting from drowning or vehicles being swept away.

The high water levels made ground transportation virtually impossible in Harris and Waller counties, with officials pleading with residents to stay home. More than 100 intersections and sections of major thoroughfares (such as Interstate 10 and Interstate 35) were closed. Local media outlets showed pictures of considerable damage to roads and bridges that had either been partially ripped away or were damaged. At Houston’s Intercontinental Airport, 224 flights were cancelled; while an additional 54 were cancelled at Hobby Airport. Public transportation was completely halted. At the peak of the event, at least 121,000 customers were without electricity though a large portion had their power restored later in the day.

In total, nine Texas counties were declared a disaster: Harris, Bastrop, Colorado, Fort Bend, Grimes, Montgomery, Waller, Wharton, and Austin. Given the scope of damage, particularly in Harris and Waller counties, it was expected that a federal disaster declaration would be made. Also of note, the floods prompted the state of Texas to ask the IRS to grant extensions for tax filings.

This is the fourth major flood event in the greater Houston metro region in the last 12 months. Previous events occurred in May, June, and October 2015. The May 2015 floods led to more than 6,660 claims filed to the National Flood Insurance Program (NFIP) with a payout cost of USD442 million.

An elongated region that includes the cities of Dallas, Houston, Austin, Waco, San Marcos, and San Antonio is often referred to as “flash flood alley” and is one of the most flood-prone regions of North America. The name is attributed to the region’s tendency to endure frequent excessive rainfall events and its combination of hilly terrain and rapid urbanization.

Financial Loss
Given the ongoing nature of the event and the tremendous flood footprint in the nine counties surrounding Houston, it will take several days to fully take stock of the event. Total economic losses are expected to be significant, but it remains too early to provide any specific loss value. For context, a small portion of the Houston metro region recorded water heights equal or slightly greater than what was seen during the catastrophic floods resulting from 2001’s Tropical Storm Allison. That event caused roughly USD7.0 billion (2016 USD) in economic damage in Harris County alone.

From an insurance perspective, Texas is home to the second-most number of active NFIP policies. Of the nearly 591,000 Texas policies in force, the city of Houston accounts for almost 121,000. Despite the large number of policies, there are a substantial number of homes and businesses that either do not have NFIP coverage or are underinsured. This will lead to a large discrepancy between the overall economic cost and the total insured portion.