Deployable ILS capital may have fallen to $70-75bn, KBW estimates

Deployable (or not trapped and available to put to work) capital in the insurance-linked securities (ILS) sector is estimated to have fallen to around $70 billion to $75 billion, according to analysts at KBW.

KBW’s analyst team said in a recent report that they feel deployable ILS capital has declined further in recent months, especially as the quantum of losses from hurricane Ida and the European floods has become clearer.

In particular, the impacts to retrocession from these loss events has been significant, with collateralized retro reinsurance capacity dented severely, aggregate capacity perhaps even more so.

Levels of trapped collateral in ILS funds and other collateralized reinsurance or retro structures had been decreasing steadily through the first-half of 2021 and even into the second-half, until hurricane Ida came along, that is.

Trapped ILS capital had perhaps shrunk to around the mid-single-digit billions, or so, at one point earlier this year, as ILS fund managers managed to work through prior year losses and through their negotiations and relationships free up some collateral for rolling forwards at renewals.

Alongside trapping of ILS capital in the wake of catastrophe loss activity in 2021, KBW’s analyst team also note a churn in the investor base, as well as some redemptions and even investors exiting the sector.

ILS capital levels are seen as one of the critical drivers of reinsurance pricing for the January 2022 renewal season, according to KBW.

Adding that this has resulted in, “Catastrophe losses, trapped capital, and fund redemptions pushing ILS-backed reinsurance capacity down to an estimated $70-75 billion.”

This does seem a reasonable estimate, given the impacts from hurricane Ida and the aggregate impacts of Ida on top of other catastrophes this year. 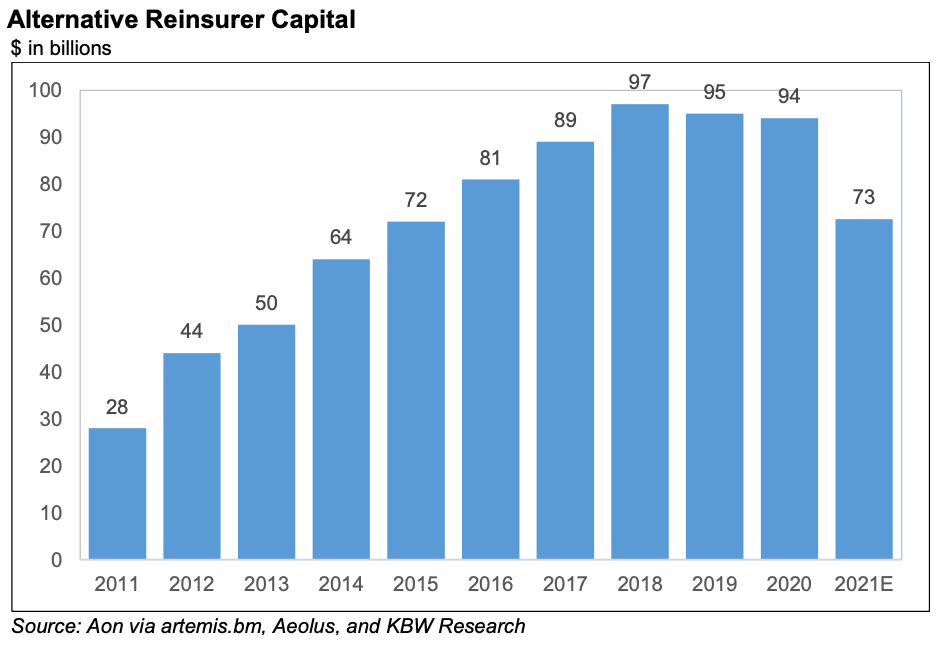 As we’ve been explaining in our coverage, the retrocession market is one segment that has been particularly affected, with capacity greatly reduced, especially for aggregate covers and the reinsurance renewals delayed due to this and other challenges.

KBW summarise how the retro and ILS capital situation will affect the renewals and more broadly, “We understand that ILS funds accounted for a disproportionate share (reportedly as much as 75%) of aggregate retrocessional reinsurance capacity, and the consequent capacity shortfall of this ‘ultimate backstop’ is likely to ripple through other reinsurance (and ultimately insurance) lines as reinsurers recalibrate their expected net exposure.”

As a reminder, RenaissanceRe’s CEO had forecast back in October than some retro ILS funds could have as much as 70% to 80% of their capital trapped after hurricane Ida.

One driver of profits for reinsurers into 2022 is expected to be the rate increases they achieve at the renewals, with “potentially significant rate increases for property catastrophe reinsurance as some ILS investors retrench,” KBW forecasts.

Of course, not all areas of the ILS market are as challenged as retrocession.

In fact, the catastrophe bond market continues to grow, with a record level of issuance in 2021 and the outstanding market set to record a significant annual percentage of growth this year.

That shows capital is still flowing steadily into the ILS market, just where it is flowing to is a little different to prior years.

In addition, some of the lower to mid-level volatility collateralized reinsurance fund strategies have continued to report relatively good returns despite the heavy catastrophe loss year.

While 2021 may have been disappointing again, it has by no means been a terrible year for these types of reinsurance focused ILS funds and we expect some of them will be able to grow in the coming months too.

On top of that and as we’ve explained in recent articles, we are aware of new capital targeting some specific areas of the retro market, especially the higher-layer indemnity and industry loss based product set.

So, while ILS capital may once again be dented, it’s certainly not all doom and gloom and attractive opportunities still exist for investors that appreciate the return profile reinsurance can provide.