Commercial property rates up 8.8% in Q3 as capacity contracts

The market for U.S. commercial property insurance is one area where continued and accelerating firming or hardening of rates is evident, with the CIAB reporting an increase of 8.8% in Q3 2019, as available underwriting capacity continued to contract.

While the occurrence of a hard market in the traditional sense continues to be seen as relatively unlikely, without doubt the U.S. market for property insurance at the larger and more specialised end of the scale is firming consistently and at an increasing pace. 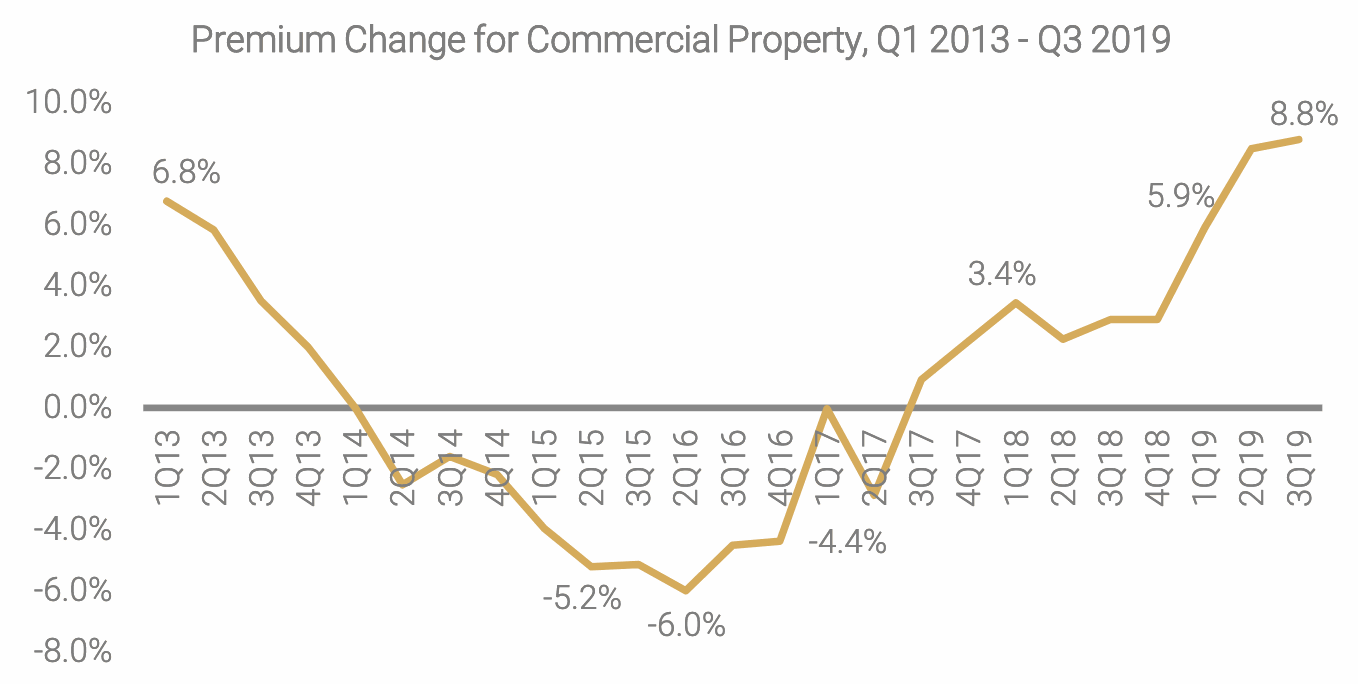 “After several quarters of market firming, we were in a truly unconventional hard market in Q3,” explained Ken A. Crerar, President & CEO of The Council. “Commercial Auto’s outsized impact on premium prices and other lines such as Umbrella and D&O continued to push prices up. Social inflation and sustained natural catastrophe losses, including floods and wildfires, also added to the strain on the markets. The question now is how long will it last?”

As we’ve stated before, this bodes well for the insurance-linked securities (ILS) players that look to access their risk from further towards the front of the market chain, as commercial and larger property, particularly catastrophe exposed, continues to drive higher rates.

In addition, as the firming of property insurance continues, while at the same time retrocession remains tight and rates are rising there, the reinsurance piece in the middle is increasingly likely to respond, as reinsurers witness their clients benefiting from higher rates while at the same time paying more for their own protection.

Capacity, as ever, is a key driver though, perhaps as much as immediate loss experience when it comes to commercial property.

While catastrophes from hurricanes, to wildfires and the midwest flooding, are all cited as drivers for higher rates, while carriers are said to be demanding higher rates for any properties in more catastrophe exposed areas whether they have experienced a loss or not.

Reports on the U.S. commercial property insurance space had insisted that capacity remains abundant earlier this year. But that sentiment has been changing in recent months, with a recent report saying capacity is available, but those deploying it are being increasingly disciplined and demanding.

The respondents to the CIAB’s survey suggest that capacity available to underwrite these commercial property risks has been on the wane at an accelerating pace. 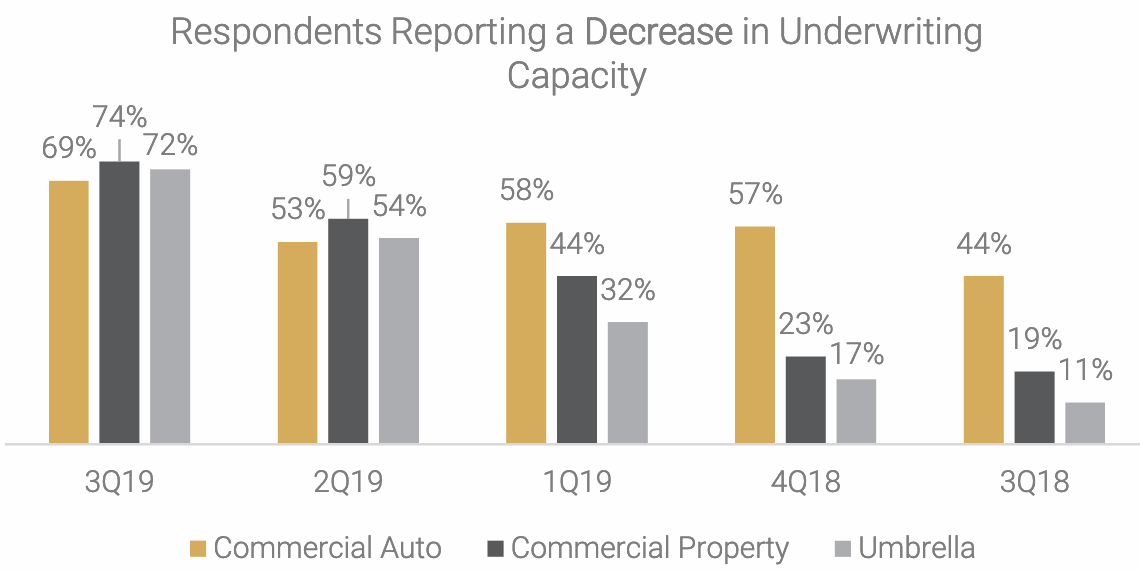 At the same time as capacity seems to be increasing, respondents to the CIAB’s survey have reported that demand for commercial property coverage is on the rise. 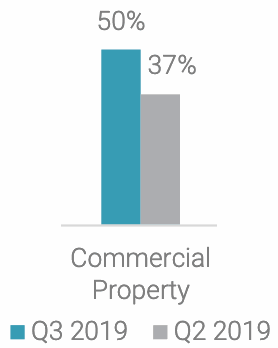 37% of survey respondents in Q2 2019 said that they experienced increased demand for commercial property insurance from clients.

But that figure rose to 50% of respondents in Q3, signalling rising demand at a time when as shown above capacity is looking increasingly constrained.

The perfect environment for market firming to persist and the CIAB’s numbers suggest this is a much broader experience than solely in catastrophe exposed property business.

The actions taken  by some larger players such as reinsurance firm Swiss Re’s Corporate Solutions and insurance giant AIG appear to be having an effect on the market, at a time when catastrophe losses have been higher and awareness of climate related exposure is growing.

Alongside issues within casualty lines and fears over reserves in that space, the motivation to increase rates seems strong in commercial insurance, boding well for those targeting sources of primary property risk.

Clients are clearly aware of how the commercial insurance market is moving, with 73% reporting a fear that rate increases would continue, while 55% cited a concern over limitations on their coverage.

Higher deductibles, tighter underwriting guidelines and reduced limits are becoming the norm, which presents an opportunity for new forms of capital to enter the commercial property space, either as direct underwriters through partnerships with MGA’s (as we’ve seen some ILS funds do), or through provision of reinsurance capital in dedicated facilities to help primary writers capitalise on higher rates and provide more capacity to clients.

The market for property risks in the United States appears to be reaching a point in the cycle where the facilitisation of risks, backed by the capital markets, looks like an increasingly attractive prospect.

If originators can build large and diverse enough risk pools, the capital to back them, or at the least take out the catastrophe risk, remains abundant, efficient and available.