The insurance and reinsurance market is unlikely to experience what would have previously been termed a “hard market” and while continued hardening is likely, performance and capital levels will need to get much worse for a “true” hard market to be experienced, rating agency Fitch believes.

Fitch Ratings explains that a situation where market conditions are consistent with returns on capital above required rates, or a so-called hard market, represents “an uncommon occurrence” today.

Commenting on the U.S. property and casualty market, Fitch said that the last true hard market was from roughly 2003 to 2007, but these days the rating agency expects hard market conditions to be increasingly “fleeting.”

“The P/C industry always has been cyclical, driven in large part by the level of capital or underwriting capacity that is dedicated to writing insurance business. Changes in the supply of capital over time are influenced by the economic profit opportunity available in the market. The level of capital or underwriting capacity allocated to the market influences the direction of premium rates in an inverse fashion,” Fitch explains.

As a result, the influence of alternative sources of reinsurance capital and insurance-linked securities (ILS) is particularly strong in the dynamics of the market and whether conditions ever get back into the territory where they can be considered hard.

In fact, soft markets are “the natural state” as fundamentals of the profitable business of insurance and reinsurance means it is a competitive market and this can make it difficult to consistently generate underwriting returns that cover cost-of-capital.

Shortages of capacity and coverage are rare and tend to be focused on specific areas of the market (retrocession being one currently), or geographic regions. As a result, hardening can be limited, both in terms of amount of duration.

At the same time, Fitch expects that extreme soft markets will be more limited in future, as underwriting itself becomes increasingly technical and supported by data, meaning both insurance and reinsurance firms should have better visibility of where the minimum levels of technical underwriting return should sit.

Of course, this hasn’t exactly proved to be the case, as large, globally diversified reinsurers have tended to soak up risks from regions like Europe and Asia at profitability levels that could be considered break-even at best.

But while major disasters remain scarce in some regions this practice is likely to continue, for it allows these major reinsurance firms to dominate certain markets keeping them close to soft, which is at least good enough to make them unattractive to those with less diversification, such as insurance-linked securities (ILS) funds.

The market cycle can be simplified to an outcome of the interplay of capital, profit expectations and prices, with influencing factors being incidence of major losses, capital inflows and allocations, actual profitability, as well as players ability to diversify.

Fitch draws out a diagram of the market cycle below: 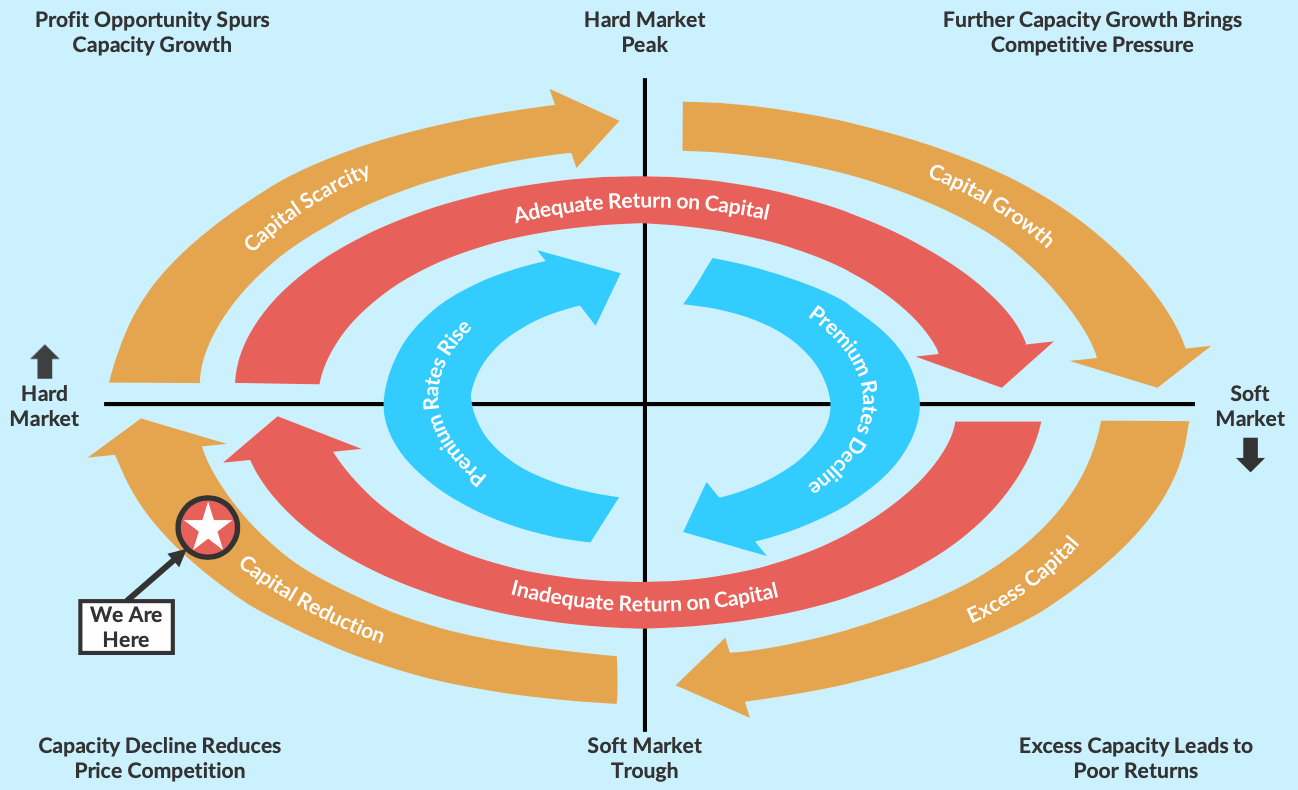 Covering loss costs, cost-of-capital and enterprise expenditure is the goal for some, particularly the smaller, less diverse and of course the ILS or collateralized specialists.

While for others, the goal is bulking up in some regions at profit levels that don’t always fully-cover these outgoings, while leveraging global or line of business diversification and also investment returns to make up the difference.

As the insurance and reinsurance market becomes increasingly data and technology driven, the ability to maintain and sustain profits, while flexing underwriting strategy and focus to take advantage of opportunities, could act as a moderating effect on the cycle. Perhaps even more so that inflows of capital have been over the last decade or so.

The market is moving towards firming, but whether it will really constitute a hard market, in the traditional sense, remains to be seen.

Key here is being ready to capitalise on a hard market, if it does come along, but Fitch warns that “True hard markets do not last long,” being increasingly rare and fleeting nowadays.

“Underwriting success breeds added competition and favorable returns attract additional capital to the market via new inflows and retained profit. Ultimately, this movement leads to reductions in premium rates and an eventual elimination of the economic profit opportunity,” the rating agency explains.

Fitch expects that commercial P&C insurance is going to see some of the most sustained hardening, certainly going on into 2020, given where that market sits and the actions taken by some major players.

However, the rating agency believes, “Financial performance would need to turn considerably worse, and capital reduced by some margin, before pricing momentum for the next true hard market would ensue.”

As a result, in the current phase of the market cycle Fitch is not expecting a true hard market to emerge.

There will be pockets, of course, commercial P&C being one and the retrocession market a clear other area of the market that is hardening relatively significantly right now.

The Japanese reinsurance renewals are expected to see some firming, while there may be some rate increases in other parts of the reinsurance market at 1/1 renewals, but an extensive hardening across the market is not anticipated at this time.

So, the trend towards more localised, loss and counterparty performance driven firming cycles looks set to continue, while factors including the fungibility of capital, levels of capital inflow, and the increasingly data and tech driven approach to underwriting, are all set to be moderating factors on the cycle itself.

In the past we might have considered recent moves such as Neon’s pulling out of writing treaty reinsurance and the shuttering of Lloyd’s syndicates such as Pioneer’s 1980 and Hamilton’s Acapella for their lack of performance and return, as signs that a broader hard market was approaching.

But at the same time you have one of the largest reinsurance companies in the world, Swiss Re, saying it’s going to double-down on writing catastrophe risks, which should in turn help it expand in other areas thanks to its diversified strategy, suggesting competition is going to remain high even after smaller ventures exit.

As a result, it seems this phase of the reinsurance market cycle may be one of firming, quite significantly in some areas, but not broad hardening.

What will it take to trigger broader hardening of the market and is that even possible today?

We’d suggest a lot more pain needs to be felt before we get to that stage, especially when other forces are driving increasing efficiency through the insurance and reinsurance sector at the same time.

Looking back at Fitch’s diagram of the insurance and reinsurance market cycle (above) it seems clear that the duration that the market spends in each quadrant of the overall cycle is changing, with more time increasingly spent in the lower softening phases than in the upper firming quadrants.

Those upper quadrants of the cycle, of capital scarcity and growth, may become ever more squeezed, as capital fungibility and pace of deployment continues to increase and third-party capital becomes an increasing feature.