It’s clear that strategies on underwriting catastrophe risks have diverged in the reinsurance sector, with some traditional companies filling their boots on higher rates, but others pulling back and offloading the risks to their third-party capital vehicles.

Overall, reinsurance firms are seen to be taking a measured approach to catastrophe risks in 2020, rating agency Moody’s explained in a recent report.

There is a sign of consistency in some areas, with those increasing their catastrophe risk appetites only allocating marginally more of their overall capital into cat risks in 2020, despite the higher rates.

But there is a marked divergence, in particular between the big European reinsurers on one side and the U.S. or Bermudian reinsurers on the other, with the embrace of third-party capital from institutional investors becoming an increasingly important catastrophe loss buffer for the latter group.

The U.S. and Bermudian reinsurance firms have in some cases significantly reduced their catastrophe PML’s, even despite the much better pricing available at the renewals in 2020, Moody’s notes.

While PML disclosures are not even across the sector, due to strategies and models used, they can provide a window into reinsurer risk appetite for the major peak peril zones and this year show that size, scale and diversification matters when it comes to the ability to assume more catastrophe risk.

PML’s had been declining prior to 2019, but after the catastrophe losses of 2017 and 2018 drove some price increases the appetites of reinsurance grew on average. But despite further rate increases in January 2020, overall sector PML exposures were relatively static across the five main peak zone catastrophe perils.

However, that’s the average cross-sector view.

When looking solely at the big European reinsurers it’s clear that appetites continued to grow, as they took advantage of their sizes, reach and global plus line of business diversification to soak up more catastrophe risks at the higher rates that were available.

At the same time, the U.S./Bermuda group of reinsurers continued to moderate their appetites for holding catastrophe risks on balance-sheet.

This is particularly evident in U.S. wind risks, the catastrophe exposure that uses the most capital for reinsurers, as Moody’s chart below shows.

Some of the Bermudian reinsurers have elected to shrink catastrophe exposure as a percentage of their books, such as Arch which has made a foray into mortgage risks in recent years.

But for others the choice made has been to hold less catastrophe risk on their own balance-sheet capital, with retrocession and third-party capital becoming increasingly in vogue.

Some reinsurers, “Have made the decision to significantly shrink their net catastrophe exposures, through both reduced direct exposures as well as the increased use of retrocessional reinsurance from the alternative market and from affiliated sidecar vehicles,” Moody’s explained.

“In contrast, the large European reinsurers continue to deploy increasing amounts of capital to catastrophe risk as pricing moves higher. For these firms, their larger scale and excellent geographic and product diversification provides an ability to increase capital allocations to catastrophe risk without placing undue pressure on their credit profiles,” the rating agency continued.

Of course, some of the large European reinsurers are also increasing their use of third-party capital at this time, in particular Swiss Re which has upsized its Sector Re sidecar again, sponsored more catastrophe bonds and also entered into a now growing direct relationship with the largest ILS investor PGGM.

The chart below clearly shows the declining appetite of the two Bermudians features, as well as the increased appetite of European reinsurers, although Hannover Re’s declined in 2020 and Swiss Re’s is relatively flat, perhaps reflecting the third-party capital activity increase explained above. 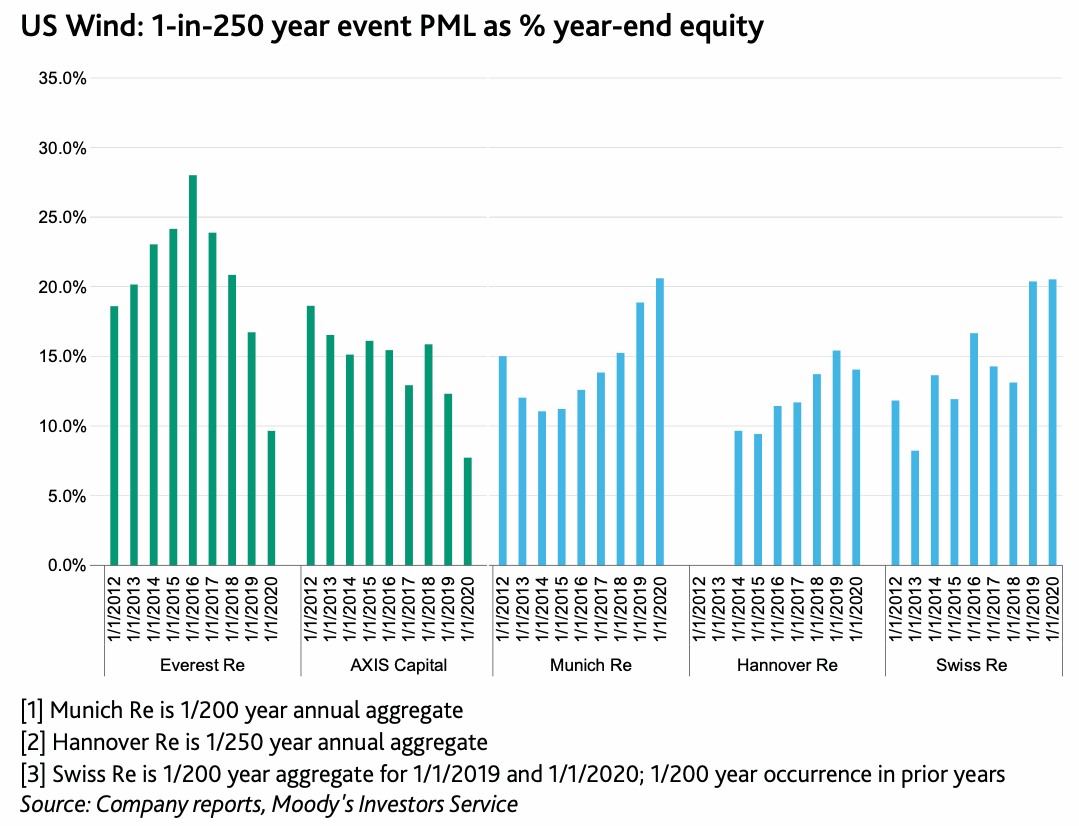 Risk appetites do fluctuate though. But it is clear that there has been a switch among the Bermudian reinsurers in particular from seeking to earn all the premium from catastrophe risks for themselves, to sharing the premium with third-party capital and earning something in fees instead.

It will be interesting to see how appetites change through 2020 and into 2021, with much higher pricing being seen at the renewals as reinsurance rates continue to harden.