Catastrophe losses ~48% above average by end of November: Jefferies

After November 2021, full-year catastrophe and severe weather losses were estimated to be running around 48% ahead of the long-term 2008 to 2020 average, according to analysts at investment bank Jefferies.

However, November actually saw catastrophe losses running below average for the insurance and reinsurance industry, slowing the pace from being roughly 50% above average at end of October.

The United States saw a particularly quiet month, by comparison, with the total insured loss during November 2021 being lower relative to other regions, Jefferies analysts estimate.

The flooding in Canada was the largest insurance and reinsurance market loss event, which Jefferies estimates at around $400 million.

While European windstorm Arwen was another major event in the month of November, which is estimated to be around a $300 million industry loss. 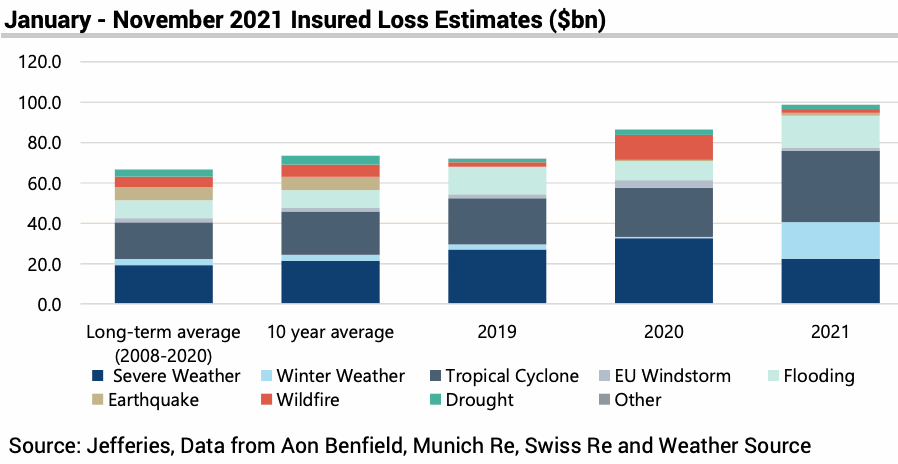 The size of individual loss events aside, Jefferies team note that the above-average run-rate for catastrophe and weather losses in 2021, is yet again putting pressure on the insurance and reinsurance market.

“Above-average insured losses are putting pressure on the adequacy of many underwriter’s natural catastrophe loss budgets. This was further evidenced during the recently reported 3Q 2021 results, and it is thus becoming increasingly likely that budgets will be exceeded,” the analysts explained.

Adding that, “Consequently, we expect this to drive material rate rises for property-catastrophe contracts at the upcoming 1st January 2022 reinsurance renewals.”

Catastrophe losses are running 34% ahead of the 10-year average at the end of November, Jefferies note, but the pace is likely to accelerate once December’s figures are in.

« Older article December severe weather in US to complicate or slow renewals: BMS