Catastrophe bonds softer in 2021, but investors holding the line on pricing

As we’ve been documenting in recent weeks during our normal coverage of every new issuance, there is clear evidence that catastrophe bond funds and investors are holding the line on pricing in recent weeks, with more recently priced cat bond tranches seeing their coupons rise, rather than fall.

At the same time, the percentage of newly issued catastrophe bond tranches that upsize (so complete larger than their initial target coverage amount) has also declined in recent weeks, while the proportional change in size for those that have has now reduced, compared to recent months.

It’s all down to catastrophe bond fund managers and investors feeling like their risk appetites have been tested by some new issues and they are responding by holding the line on pricing as the important January reinsurance renewal season approaches.

With reinsurance pricing rising across almost all catastrophe exposed regions and retrocession rates rising even faster, the cat bond market had been softening through 2021, which made its coverage even more attractive to sponsors.

But, cat bond funds and investors do have a limit to their risk appetite, a point where they will say “enough softening is enough” and exhibit a desire to install a floor under pricing.

We appear to have reached that point, for the moment.

Catastrophe bond pricing has softened in 2021 and spreads are now narrower than they were a year ago.

For full-year 2020, Artemis’ data shows that catastrophe bond spreads, so the gap between average coupon and average expected loss, sat at 4.96%.

In 2021, this gap has narrowed to just 3.86%, reflecting the softening seen in the catastrophe bond market this year (click on the chart image below for an interactive version). 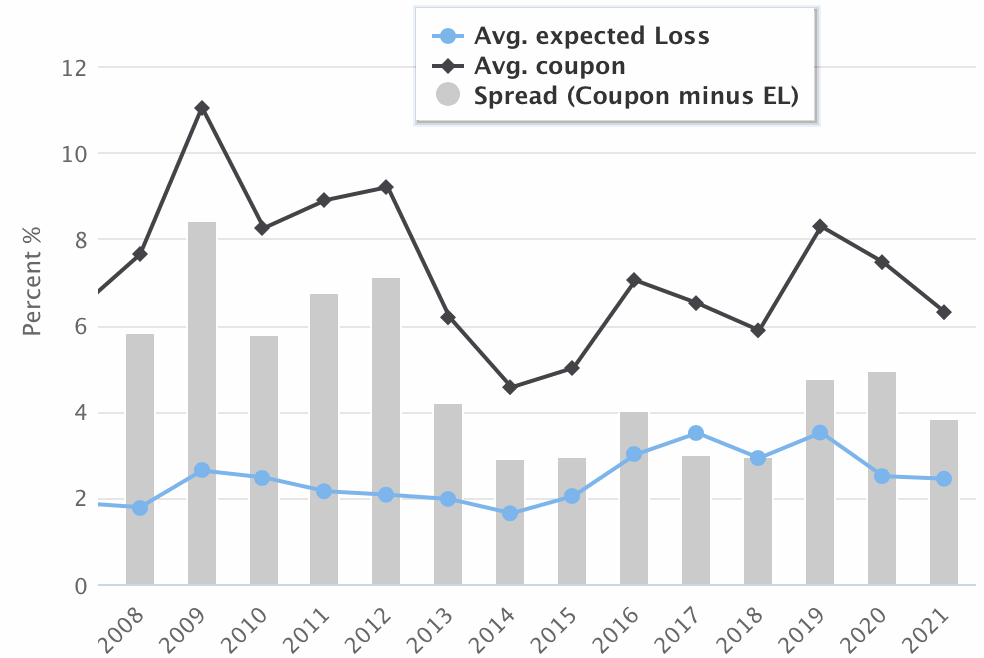 It’s important to note though, that the main reason catastrophe bond spreads have narrowed in 2021 is down to lower average coupon sizes.

The average expected loss of catastrophe bond issuance in 2021 is actually only slightly lower than in 2020, suggesting the levels of risk assumed by cat bond funds and investors have not changed dramatically.

But the coupons paid for taking on this risk have, on average, fallen by just over one percent.

Because of this, the average multiple-at-market of catastrophe bonds issued in 2021 is lower than we recorded for full-year 2020 issuance (click on the chart image below for an interactive version). 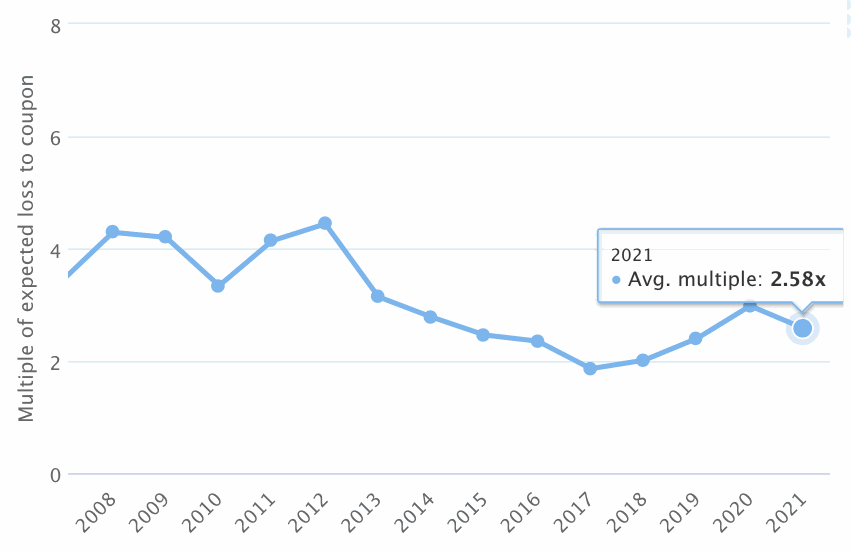 The average multiple of catastrophe bond issuance tracked by Artemis in 2021 has fallen to 2.58 times the expected loss, down from 2.98 for the full-year 2020 average.

Please note that the data in these two charts includes every 144A property catastrophe bond, as well as any life/health/specialty line cat bonds that we have pricing data for from each year. It doesn’t include private cat bond lite deals, as we don’t have full transparency to see the underlying risk metrics or pricing on those deals.

The data clearly reflects the softening of catastrophe bond pricing through 2021, which will have been partly stimulated by the relatively significant growth in issuance and the resulting inflows of new investor capital to large catastrophe bond funds over the course of the year.

But, what is encouraging, is that the softening does seem to have slowed as the year progressed and now with the January 2022 reinsurance renewals almost upon us, it appears cat bond funds and investors are now holding the line on pricing.

We’ve documented this through a number of the recently completed catastrophe bond deals and examining our cat bond market data shows that fewer deals have upsized, while more are seeing their pricing settle flat, or rise higher, during the bookbuilding process.

This has especially been the case for any catastrophe bonds providing aggregate reinsurance protection, as well as any retrocessional deals.

In fact, even the latest catastrophe bonds from reinsurance giants Swiss Re and Hannover Re have priced higher while the book was being built.

While some other tranches of notes have seen quite steep price increases, as investors demonstrate their desire to stem the softening and to draw a line, or install a floor, under cat bond pricing.

As reinsurance and retrocession underwriters have been slow to provide confirmed pricing for many renewals and the renewals have become late as a result, there is an increasing expectation that reinsurance rate increases may turn out to be a little better than expected.

The catastrophe bond market would also hope to benefit from that and pushing down cat bond rates further would not help in achieving this goal.

The cat bond market will also be keen not to make its coverage too much cheaper, at a time when it too is keen to generate higher returns for its investors after losses suffered over recent years.

So it’s encouraging to see the tide of softening held back and cat bond funds and investors try to maintain a certain level of risk-adjusted return from their recent cat bond investments.

It’s also worth noting that the softening seen through 2021 has made catastrophe bond backed reinsurance and retro coverage even more appealing to some sponsors, which has helped to stimulate the record issuance we are seeing this year.

This bodes well for the first-quarter of 2021, when we expect there to be more strong issuance activity and we understand the pipelines for new deals are filling quite nicely for the coming year.

Read about every catastrophe bond issued in the Artemis Deal Directory and analyse issuance of the cat bond market using our range of visualisations and charts.