Catastrophe bonds return a profit; which in times like these is rare

I’ve written a number of times about the relative performance of cat bonds compared to other investments but it is only in the past couple of months that the difference in performance is really becoming apparent. Despite all the negative press about securitization, reports of large catastrophe losses, discussion of the failure of Lehman Brothers and the default of Willow Re catastrophe bonds and insurance-linked securities continue to provide returns.

These returns, while not very large, are significantly higher than comparable securities have performed of late. The latest comparison being made (in the Bloomberg article about Willow Re) is that catastrophe bonds have returned 1.74 percent over the last year (as measured on the Swiss Re Cat Bond Total Return Index) while similarly rated high-yield bonds have declined in value causing investors a loss of over 20 percent. That’s quite a difference between two securities which used to track much more closely.

Here’s a view of how the Swiss Re Index is performing; you can see it’s made quite a jump since it bottomed out in October after Lehmans demise. Will the default of Willow Re cause more nerves amongst investors? 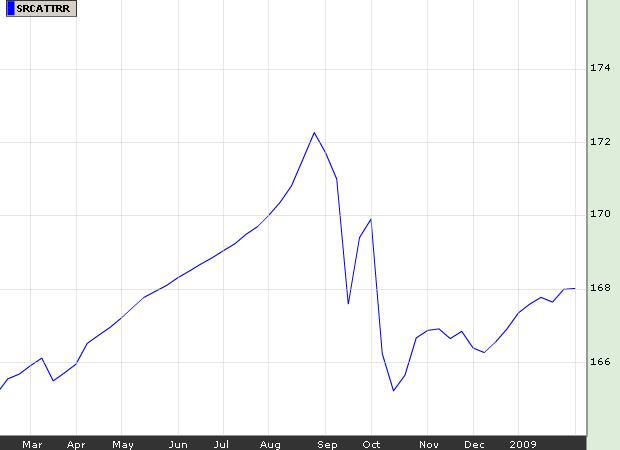