Cat bond spread levels double since the start of 2022: Tenax

Spread levels in the catastrophe bond market may have doubled since the beginning of 2022, as the market reprices return expectations in the wake of hurricane Ian, according to Tenax Capital.

Tenax Capital, the London based hedge fund that was founded by its CEO Massimo Figna and offers a UCITS catastrophe bond fund to its investor clients, has analysed secondary market price indications as of October 2022, to gain a view of where the market’s return ambitions now lie.

“We are witnessing a sharp increase in the net compensation required by investors to hold insurance risk, measured as the margin of the spread over the expected loss,” the asset manager explains.

Adding that, “For investors, this is the most attractive entry point in at least 15 years, without considering the additional return provided by the collateral component, which are at the highest levels since 2007.”

All of which makes catastrophe bonds a very compelling investment proposition at this time. But just how compelling compared to a year ago?

To find this out and to derives just how much of in increase in compensation cat bond investors are now looking for, Tenax analysed secondary pricing to see how spreads have moved in the wake of hurricane Ian.

Reinsurance rates are set to increase at the next renewals, but for cat bond investors the effects and also the magnitude of any price increase, may become visible sooner, Tenax said.

“Investors will welcome wider spreads, despite the initial negative impact on outstanding bonds. Ian-related spread widening is following other factors that were already leading investors to demand a higher level of compensation to hold catastrophe risk, be it in traditional or ILS form,” the investment manager explained.

By June 2022, cat bond spreads were already about 25% higher than the previous year, their analysis shows, in a move fuelled by inflation and the declining reinsurance capacity levels, along with other capital market forces.

Tenax calls these effects a “perfect storm for the realignment of (re)insurance pricing and underlying terms and conditions.”

Having looked at the development of cat bond average mid-spreads from the end of 2018 up to October 2022, excluding higher-yielding issues, Tenax concludes the increase is already very significant.

“We estimate that the true market spread at the end of October 2022 is just above 11%, more than 2x the level seen at the beginning of 2022,” they explained. Shown in chart below. 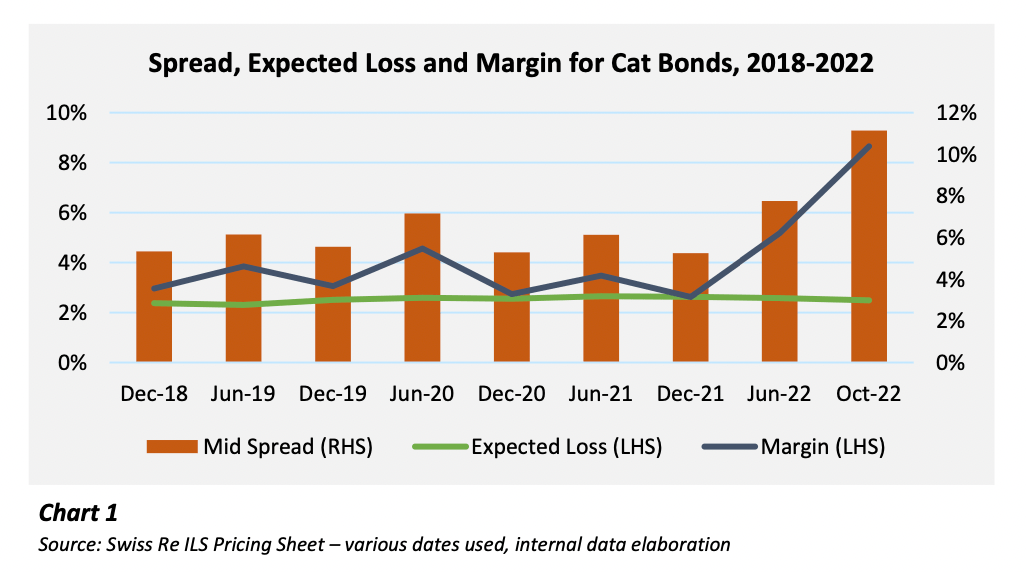 They add that it’s important to note that the risk levels haven’t increased to drive this, with expected losses roughly stable at an average of 2.55%

“Moreover, we do not expect the average market expected loss to increase with new cat bonds issued at the upcoming renewals,” Tenax said.

In addition, because of these significant spread widening effects, Tenax believes the ability of cat bond investors to earn back the lost performance after hurricane Ian has been greatly accelerated.

“Using our computation of the “true” market spread of about 11% (see Chart), it should take about six months at index level to recover the cat bond losses currently priced in,” Tenax said.

Comparing this to after 2017’s hurricanes when it took the Swiss Re cat bond index around nine months to recover the ground lost from those storms.

We also reported last week that Plenum Investments forecast that Ian losses could be recovered in 6 to 8 months by the cat bond market.

Finally, Tenax also believes that as a result of catastrophe bond market developments, more losses from Ian and investors becoming generally more choosy about where to allocate to, the quality of the cat bond market may also increase.

They cite the example of certain cat bonds not making it to market around the mid-year.

Saying, “It does not necessarily mean that only the riskiest insurers are penalised by the market, but also the ones not providing the desired level of transparency on their exposure, underwriting standards and claims handling.

“The net result being that only the most transparent, best managed and knowledgeable underwriters will continue to be part of the market and attract investors’ capital in 2023 and beyond.”

This is an excellent point and one that, along with further shifts towards named-peril covers and greater clarity over what’s included under a cat bond backed reinsurance protection, should mean the overall stock of cat bonds becomes higher-quality, to the benefit of investors.