Analysis of catastrophe bond and insurance-linked securities (ILS) market pricing in the wake of hurricane Ian implies a significant hard market is ahead, with issuance multiples perhaps needing to rise by 20% to 30%, according to Lane Financial LLC. 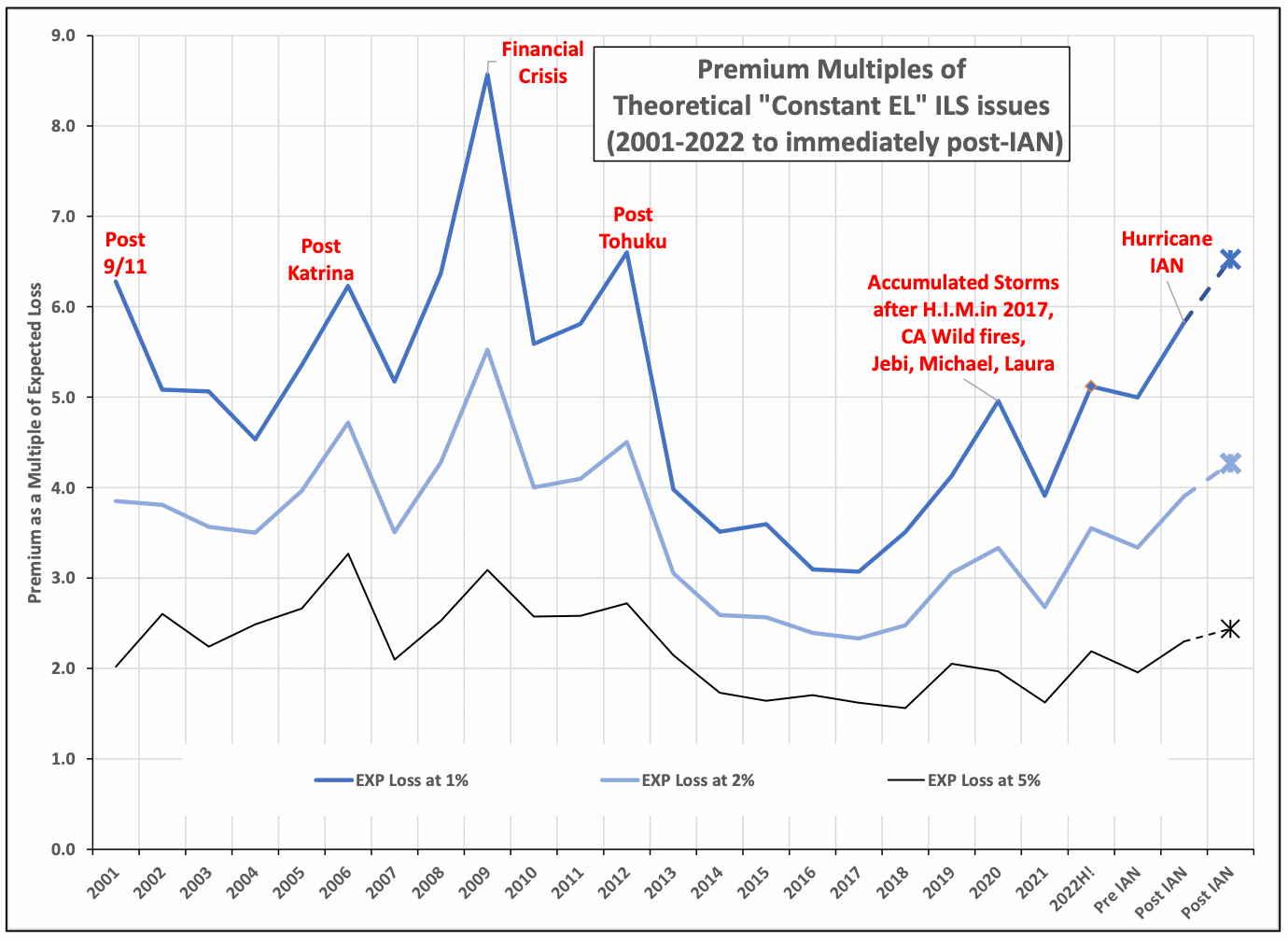 Perhaps more importantly though, the analysis implies that the ILS market is already pricing in hurricane Ian’s loss at or near the top-end of catastrophe modeller industry estimates.

Which suggests that either the loss is fully-priced, which is helpful to cat bond fund managers and investors, in allowing them to mark adequately so soon after a major catastrophe loss, or that there could be some recovery in value, as the ultimate ILS market loss from Ian may prove over-estimated.

Of course, there is also a third possibility, of loss creep and that the higher-end industry loss estimates for hurricane Ian, such as Stonybrook suggesting the insurance and reinsurance market loss may rise above $75 billion, could also prove right.

Lane Financial look at the pricing of bonds that are particularly exposed to hurricane Ian, concluding that market pricing implies a roughly $1.906 billion cat bond market loss is possible.

At that level and given a typical ILS and cat bond market share of a major cat loss, this could suggest we see something towards the upper-end of industry estimates, or the ILS market taking a larger share of hurricane Ian losses than would normally be anticipated.

But, more interesting than an analysis of impaired bonds exposed to hurricane Ian, is Lane Financial’s analysis of the price changes in cat bonds which are not exposed to losses from the storm, as these can provide some directional indications of where the market may need to price new issues at, to satisfy investor demand.

Important to note, that Lane Financial right point out that, “These implied ILS market levels could be in error; only time will tell. It will take a couple of years, possibly more, for losses to develop fully. That will provide the only complete reckoning.”

But the analysis shows where market sentiment, over hurricane Ian losses, and future pricing have moved to, so give some guidance for the future.

“They were indirectly impacted, because the likely result of Ian is that any new ILS issued will need to command a higher premium,” the analysis explains. “Hence, existing bonds with old premiums will experience a marked-to-market loss. The market will harden. The question is by how much?”

The first conclusion is that the multiple versus expected loss curve for the cat bond market shifted up and to the right after hurricane Ian.

Lane Financial then looked at how that would affect different theoretically constant expected loss levels going forwards and how their premiums would rise.

As visualised below, from Lane Financial’s new paper:

Concluding that, “The ILS market is predicting a market next year as hard as any in recent large catastrophe memory and could get nominally as hard as any when Ian’s backdraft is combined with a large financial crisis.”

Which is exactly what ILS fund managers and investors are demanding in their discussions with cedents and brokers, as the feeling is that the catastrophe risk capital has been perhaps significantly under-compensated for its deployment.

Lane Financial LLC kindly shared an early copy of its new paper with us. The full-version will be available via its website later today.