Cat bond & ILS hard market may be coming to an end: Lane Financial

There is evidence that the hard market in catastrophe bonds and insurance-linked securities (ILS) may be coming to an end, as data suggests that softening may finally have begun and could continue if 2021 remains loss free, according to consultancy Lane Financial LLC.

ILS focused consultancy Lane Financial LLC has been documenting what it now sees as one of the longest hard markets in the history of catastrophe bonds and ILS.

There was some evidence that the hard market was reaching a peak last year, as catastrophe bond and ILS rates had been rising persistently, aside from seasonal blips, but then there was a third-quarter 2020 retreat that we reported on last October, which was much more significant than seen in most recent years.

This was followed by catastrophe bond and insurance-linked security (ILS) rates-on-line remaining flat through the fourth-quarter of 2020, according to Lane Financial’s synthetic rate-on-line Index.

As we documented in our recent report on first-quarter 2021 catastrophe bond issuance, falling prices of new issuance was a sign of strong demand from investors and a softening rate environment.

Lane Financial’s latest Index data seems to confirm this assumption, with ILS rates-on-line tumbling by another -2.4% during the first-quarter of 2021. 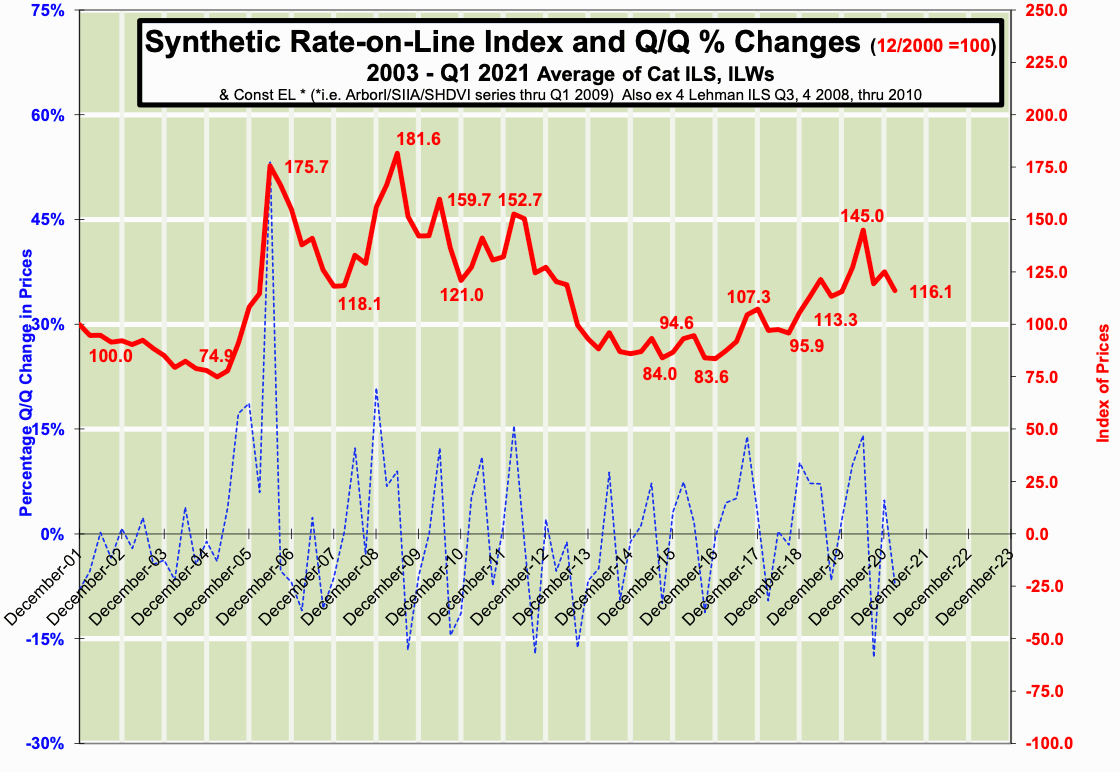 Lane Financial’s synthetic rate-on-line Index makes use of data from catastrophe bond, insurance-linked security (ILS) and industry-loss warranty (ILW) markets, offering an approximation of premiums being paid (or rate-on-line) for ILS and cat bond backed reinsurance or retrocession. It is considered one of the ILS sector bellwether benchmarks.

Commenting on market conditions, the consultancy wrote in its latest report, “The Hard market is one of the longest on record. After a head fake in 2017, the market hardened through most of 20018, 19 and 20.

“Now there is evidence that it might finally be softening. If, that is, 2021 stays loss free. That is evident from the closing gap between par outstanding and the marked-to-market value of ILS. It is also indicated by the tick down in our Synthetic Rate-on-Line index.” 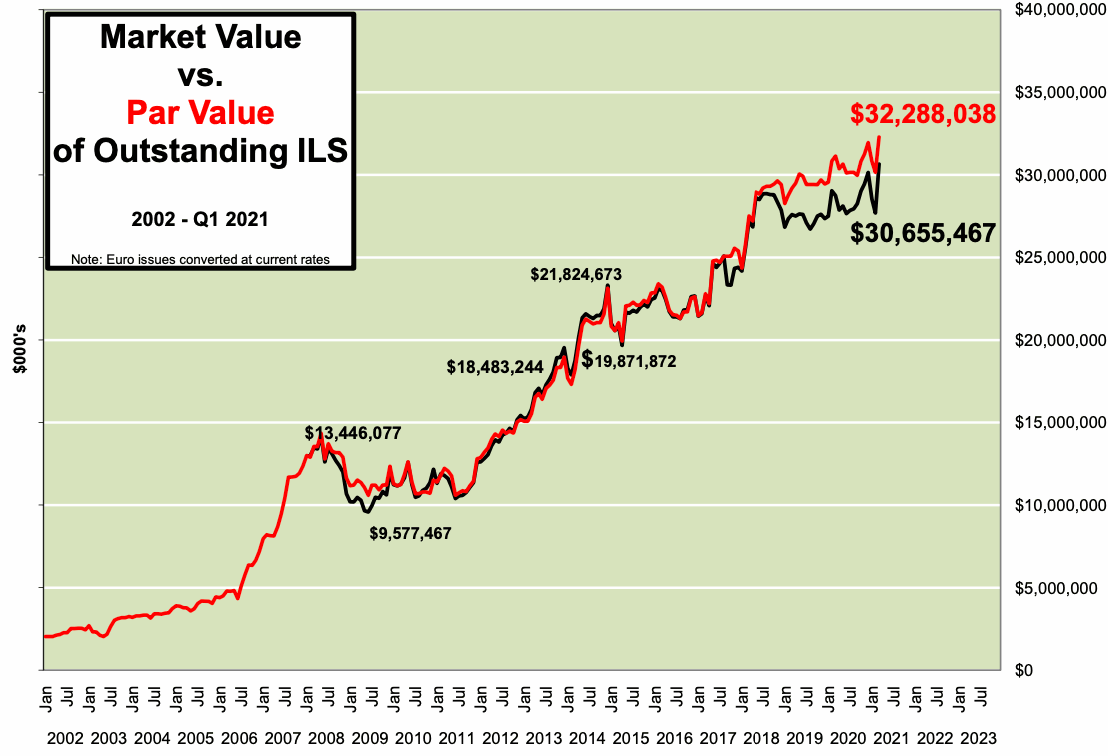 We will need to see how mid-year reinsurance renewals go and whether multiples of new catastrophe bonds issued gain a little as we move through the second-quarter, towards and beyond that timing.

First-quarter issuance of new catastrophe bonds has been seen to be at a lower average multiple than in 2020, suggesting perhaps a softening.

But the specific type of deals issued can drive this at the start of the year, so it will be telling how the average cat bond multiple at market, as well as catastrophe bond issuance spreads, evolve over the next couple of months that could be key to defining whether the market is indeed softening slightly, or just reacting to high-levels of demand for issuance that may tail off after the renewals.

However, after a period of consistent firming of cat bond and ILS rates, some softening could occur but still leaving rates-on-line above levels seen in previous, far softer years.

So it will be interesting to see how seasonality, in secondary market pricing, and the issuance pipeline affects the Index through the rest of this year.

A softening may not be a bad thing, keeping cat bond rates very competitive compared to traditional reinsurance. However ILS fund managers will be keen not to see rates softening to the degree experienced in previous soft years, as the majority felt rates had slid too far in the past and that the recovery of the last few years was largely warranted.