U.S. specialty insurance group Assurant has lifted the top of its reinsurance tower higher for both US and Florida events, with now $1.2 billion of Florida specific coverage and $965 million covering other US events.

A year ago, Assurant had shrunk its reinsurance tower somewhat, with US coverage of $930 million and Florida specific coverage of $1.15 billion, both of which figures are down considerably on the $1.16 billion U.S. tower and $1.4 billion tower with the inclusion of Florida from its 2019 renewal.

Assurant again has an $80 million first-event retention, but has optimised its reinsurance program to address both frequency and severity, lowering its retention to $55 million for certain second and third events.

Assurant has also boosted its multiyear reinsurance, with now roughly 52% of its total US reinsurance program bought on a multiyear basis.

Assurant said this supports its, “long-term strategy in reducing catastrophe risk to the enterprise,” to allow it to “focus on driving strong earnings growth and cash flow across its fee-based and capital-light offerings.”

The US reinsurance tower now protects Assurant to a projected probable maximum loss of approximately a 1-in-174-year storm, based on projected modeled loss estimates, the same modelled level of protection as a year earlier.

The company said it is pleased to have reduced volatility, in terms of reinsurance pricing, by locking in more multiyear protection at this renewal.

The reinsurance tower retains its cascading feature, with multi-event protection as higher coverage layers (Layers 2 through 6) cascade down to $110 million as the lower layers and reinstatement limits are exhausted.

Layers 2 through 6 have one automatic reinstatement, while layer 1 has two.

2021 reinsurance premiums for the program are estimated to be roughly $149 million pre-tax and the renewal was placed with more than 40 reinsurers that are all rated A- or better by A.M. Best, Assurant explained.

You can see the 2021 catastrophe reinsurance tower below: 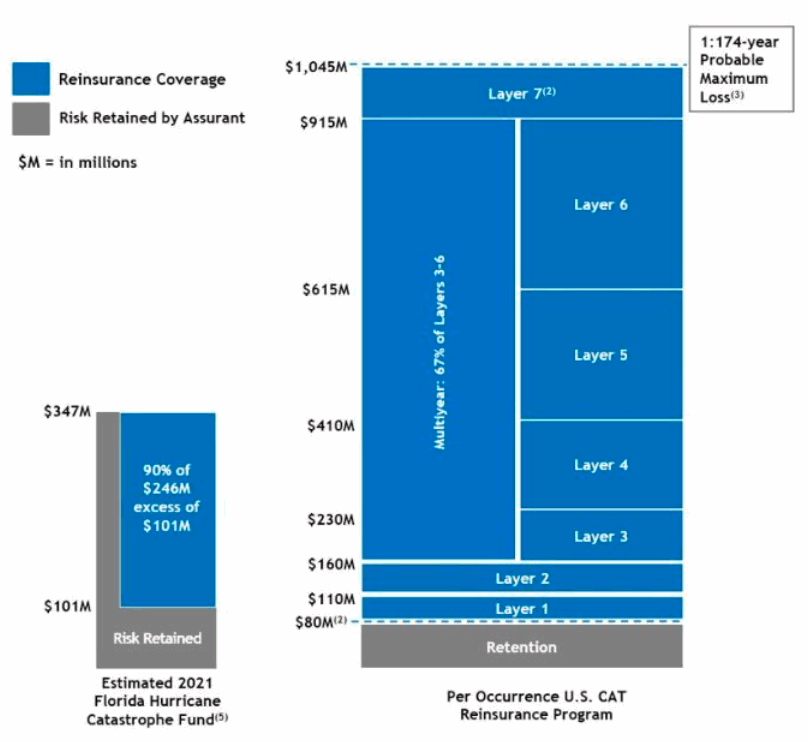