US primary insurance giant Allstate has reported that its losses from the first-quarter winter storms and freezing weather have now enabled it to recover $195 million from the reinsurance provided by its Sanders Re II 2019-1 cat bond.

As we’ve explained before, Allstate’s aggregate losses soared on the impacts of winter storm Uri and the related freezing weather in Texas, resulting in reinsurance recoveries from across its tower.

The losses triggered Allstate’s lowest layer of catastrophe bond backed reinsurance and the erosion of principal for cat bond investors has continued, now amounting to $195 million.

When we last reported in April, it looked like Allstate was set to recover roughly $184 million from its nationwide aggregate reinsurance tower, with the Sanders Re II 2019-1 cat bond the likely source of these recoveries.

But in reporting its first-quarter results yesterday, Allstate revealed that the erosion to the $300 million catastrophe bond has now reached $195 million, leaving just $105 million of coverage from that cat bond to cover future losses or loss creep.

Because of the losses Allstate has faced, the carrier has eroded a chunk of its reinsurance tower, which it will now seek to replace by adding a new gap fill layer in the second-quarter of the year.

The gap fill layer of reinsurance Allstate is set to buy this quarter will attach at just below $4 billion of losses and sit alongside the remaining $105 million of per-occurrence protection from the Sanders 2019-1 cat bond.

With this addition, Allstate’s occurrence reinsurance tower will now be the largest it has ever been, up from just under $5 billion last year, with some other expanded layers adding in total around $770 million of reinsurance cover.

Reinsurance has played a significant role in protecting Allstate in the last quarter and calendar year.

Tom Wilson, CEO, explained, “Gross catastrophe losses of $1.67 billion for the quarter were nearly eight times greater than 2020 but were offset by $1.08 billion of reinsurance and subrogation recoveries.”

The Sanders Re catastrophe bond played a significant role in these recoveries, but we’re also told some collateralized cover existed in the towers as well and could have been affected as well.

With Allstate set to renew its new and enlarged tower this quarter, the reinsurance program for its Nationwide covers will look like the below. 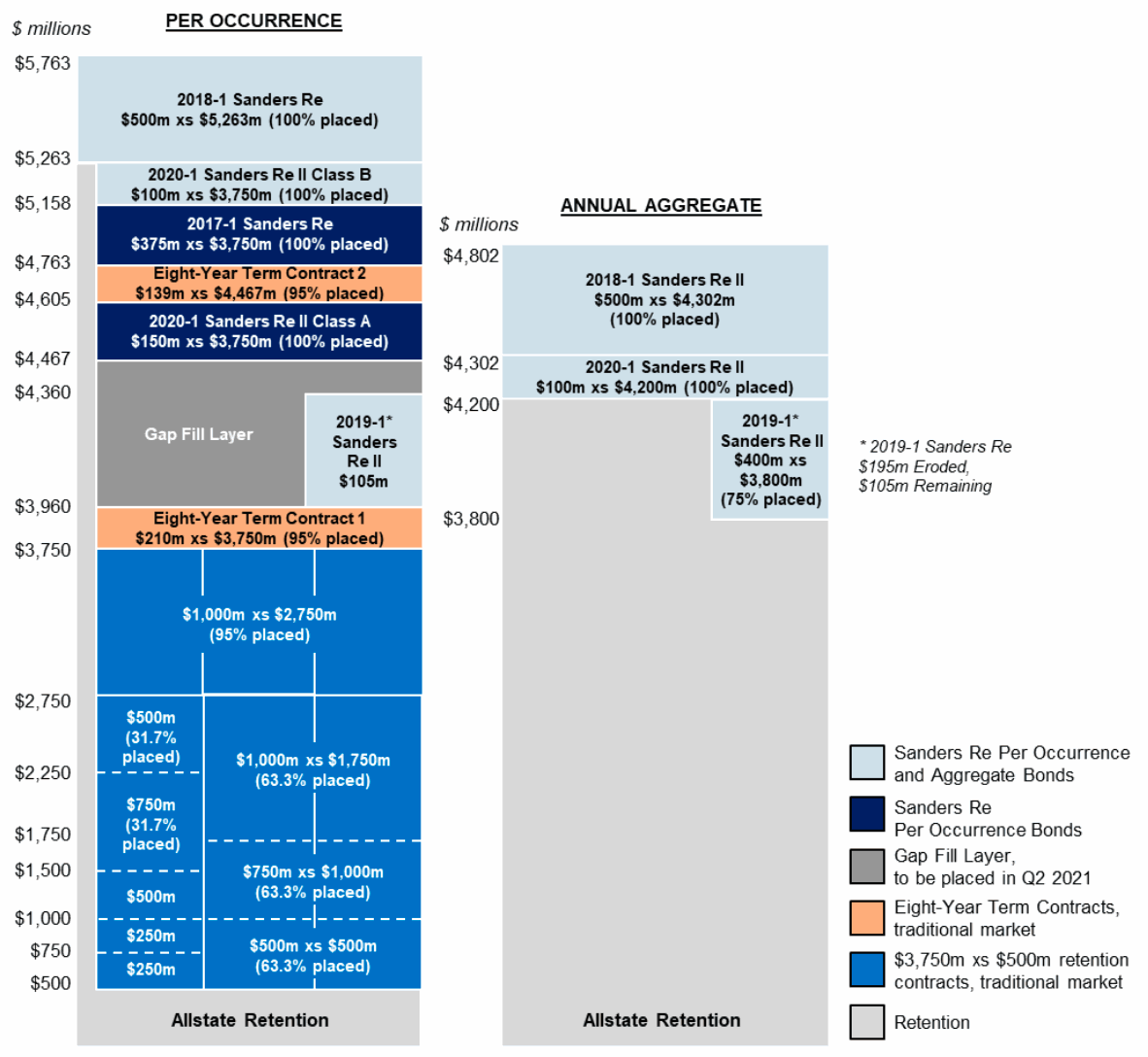