Global reinsurance giant Munich Re has estimated that insurance industry losses from natural disasters or catastrophes in 2021 were roughly US $120 billion, the second-highest annual total ever. 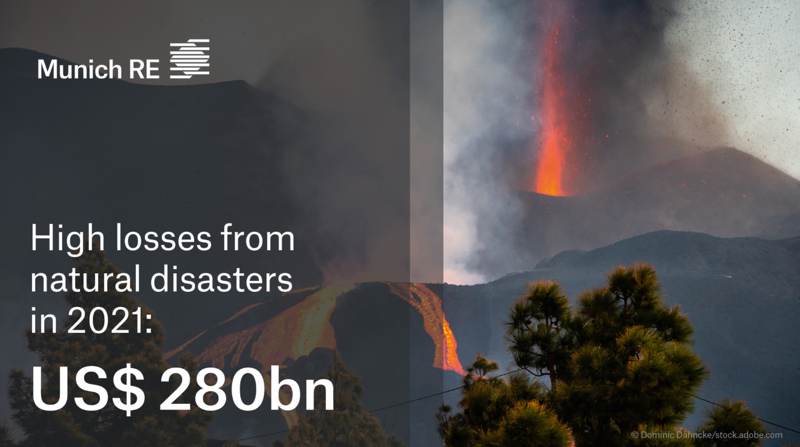 This is a higher total than most sources had been discussing, as we’d been hearing that annual natural catastrophe and severe weather insured losses might reach $110 billion, once the December tornado outbreak in the United States was added to earlier preliminary totals.

As a reminder, insurance and reinsurance broker Aon had pegged 2021 insured catastrophe losses as 13% above the annual decadal average by mid-November, having reached roughly $107 billion.

Reinsurer Swiss Re then said that insurance industry losses from natural catastrophe events were preliminarily estimated to reach $105 billion in 2021, a figure given in mid-December.

So Munich Re’s figure of $120 billion is higher and the highest total estimate for 2021’s global natural catastrophe and severe weather activity that we’ve seen.

Part of the reason for this is that Munich Re has put a number on the US tornado outbreak in December, saying that economic losses are estimated to be around $5.2 billion and the insured losses from the tornadoes would be around $4 billion.

Overall economic losses for 2021, from natural disasters, catastrophes and severe weather, are estimated to have been $280 billion by Munich Re, which is the fourth-highest annual total to date.

For the insurance and reinsurance industry, Munich Re estimates that, alongside 2005 and 2011, the year 2021 was the second-costliest ever for the insurance market, at around $120 billion.

Torsten Jeworrek, Member of the Board of Management at Munich Re, commented, “The images of natural disasters in 2021 are disturbing. Climate research increasingly confirms that extreme weather has become more likely. Societies need to urgently adapt to increasing weather risks and make climate protection a priority.

“Insurers meet their responsibilities by covering a portion of the risks and losses. By applying risk-adequate premiums, they put a price on natural hazards, thereby encouraging carefully considered behaviour to limit the losses. At the same time, severe volcanic eruptions and earthquakes in 2021 showed that we should not overlook these categories of natural disasters either.”

Munich Re highlighted that many of the weather catastrophes that occurred in 2021 fit in with the expected consequences of climate change, which makes loss preparedness and climate protection a matter of urgency, the reinsurer said.

Because of the fact the majority of insured disaster losses in 2021 were in the United States, the protection gap narrowed as more of the losses were covered by insurance and reinsurance.

But the gap was still roughly 57%, Munich Re noted, reflecting the need for more insurance cover in even advanced markets.

The US accounted for around $85 billion of the insured loss total for the year, which was more than the global insured loss tally in 2020, according to Munich Re’s figures.

Hurricane Ida drove the largest loss, as you’d expect, at around a $36 billion industry loss, Munich Re believes.

That’s higher than many reinsurers are currently reserved to, our sources suggest, which means further deterioration in hurricane Ida losses reported is possible through the early weeks of 2022, we believe.

Ernst Rauch, Chief Climate and Geo Scientist at Munich Re, and head of the Climate Solutions Unit, commented on the influence of climate change in the losses experienced, “The 2021 disaster statistics are striking because some of the extreme weather events are of the kind that are likely to become more frequent or more severe as a result of climate change. Among these are severe storms in the USA, including in the winter half-year, or heavy rain followed by floods in Europe.

“For hurricanes, scientists anticipate that the proportion of severe storms and of storms with extreme rainfall will increase because of climate change. Even though events cannot automatically be attributed to climate change, analysis of the changes over decades provides plausible indications of a connection with the warming of the atmosphere and the oceans. Adapting to increasing risks due to climate change will be a challenge.”

The insurance gap, between economic and insured losses, remains an issue and Munich Re highlights the gap persists even in advanced economies of the world.

“Greater insurance density can help people and countries to better cope with the financial consequences of a disaster and help them return to a normal life. Developing concepts in partnership with governments (public-private partnerships) certainly makes sense,” Ernst Rauch explained.