The Colorado State University tropical weather forecasting team, the Tropical Storm Risks forecasters and the Weatherbell team have all toned down their forecasts for the 2018 Atlantic hurricane season, pointing to cooling of Atlantic sea surface temperatures. 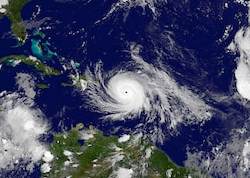 As explained recently, there has been an expectation in insurance and reinsurance circles that the forecast numbers would begin to drop, due to the cooler than expected sea temperatures observed in key tropical zones of the Atlantic.

Both sets of forecasters cite anomalous cooling of the tropical Atlantic as a key reason for the reduction in the forecast numbers for hurricane activity in 2018.

The TSR team noted, “Considerable cooling of sea surface temperatures in the tropical North Atlantic and Caribbean Sea associated with a strengthened Azores high pressure system during April and May. These cooler waters are expected to persist through the summer and to be accompanied by enhanced trade winds and enhanced sea level pressures in the regions where hurricanes form. These environmental factors are all inhibiting to hurricane activity.”

While the Colorado State forecasters said, “We have decreased our forecast and now believe that 2018 will have approximately average activity. While we still do not anticipate a significant El Niño during the 2018 Atlantic hurricane season, most of the North Atlantic has continued to anomalously cool over the past two months. The eastern and central tropical Atlantic is cooler than normal at present.”

As a result the Colorado State team expect, “A near-average probability for major hurricanes making landfall along the United States coastline and in the Caribbean.”

One difference to note in the forecasts is that Colorado State includes the pre-season sub-tropical storm Alberto within its 14 named storms, while TSR does not, with its 9 named storms being a forecast for the June 1st to November 30th season only.

So we could perhaps bump the TSR named storm number forecast up to 10, but that makes little difference to the averages.

Additionally, meteorological company Weatherbell, another forecaster we track, which had called for 11 – 15 named storms, 5 – 7 hurricanes and 1 – 3 major hurricanes in 2018 has also lowered its forecast.

Our Artemis average forecast for the 2018 Atlantic hurricane season from the list of meteorological organisations we track  stood at 14 named storms, 7 hurricanes and 3 major hurricanes after adding the NOAA forecast last week.

But now, with the inclusion of these reduced forecasts from Colorado State and TSR, the Artemis average forecast has dropped slightly to 13 named storms, 6 hurricanes and 3 major hurricanes.

If the anomalous cooling of the Atlantic persists we will likely see that average forecast come down further, as new updates are added from the list of meteorological organisations we track.

As we keep reiterating though, storm numbers are not what really matters, it is intensity of storms and where they are steered towards that drives the potential for insurance, reinsurance and ILS or catastrophe bond market losses.