The second quarter of 2011 has been good for wind energy producers across the bulk of the U.S. after wind speeds have been reported to be generally elevated above normal across much of the country in a report from 3TIER®, a global leader in renewable energy risk analysis.

Their wind performance map for the second quarter of 2011 shows that wind speeds were above seasonal averages. This provides an indication of how well wind energy producers should have performed during the quarter and their wind monitoring also provides the basis for measurement and pricing for some weather risk management and weather hedging tools.

The pattern for Q2 2011 is for wind speeds of 5% – 10% above normal for practically the entire U.S. with especially strong wind across the southern Mississippi Valley and the southern Rocky Mountains, with some places exceeding 25% above the norm.

It’s hard to say whether increased wind speeds during Q2 could be linked to the increased incidence of tornadoes that were seen. 3Tier say the dominant feature of the quarter was a stronger pressure gradient and thus much higher wind speeds across the U.S. south-central area. The strong pressure gradient resulted in an upper-level trough over the northwestern U.S., associated low surface pressure in the northern Great Plains, and high surface pressure over the Southeast which do sound like conditions conducive to convective formation.

The map below shows the wind speed deviation from the norm during Q2. 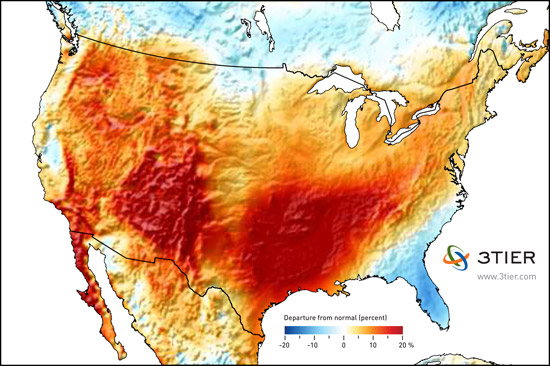