In a slight improvement on the -4% decline witnessed in recent months, U.S. commercial P&C rates declined by an average 3% year-on-year in March, as insurers somewhat diluted their aggressive stance on pricing, according to MarketScout.

After three consecutive months of U.S. commercial P&C rates declining by an average -4% year-on-year, the pace of price decreases slowed during March reports MarketScout, to -3%.

Richard Kerr, Chief Executive Officer (CEO) of MarketScout said; “One month certainly is not a trend but insurers did moderate their aggressive pricing in March.”

With the insurance and reinsurance industries remaining under significant pressure it’s not surprising to hear Kerr discuss any improvement in U.S. commercial P&C price declines in this manner.

Despite a slight improvement in rate decreases in March the industry remains pressured from a wealth of both alternative and traditional reinsurance capacity that continues to filter down into primary lines, exacerbating the competitive environment that’s evident across multiple business lines.

With no signs of the softening landscape abating anytime soon, absent perhaps a substantial loss event or multiple large events, it’s expected that rates across the market will continue to be compressed throughout 2016.

Analysts at Keefe, Bruyette & Woods (KBW) also provided some commentary on U.S. commercial P&C rate movements in March, noting that despite the improvement from February the firm expects “this deceleration to quickly fade, similar to past fluctuations.” 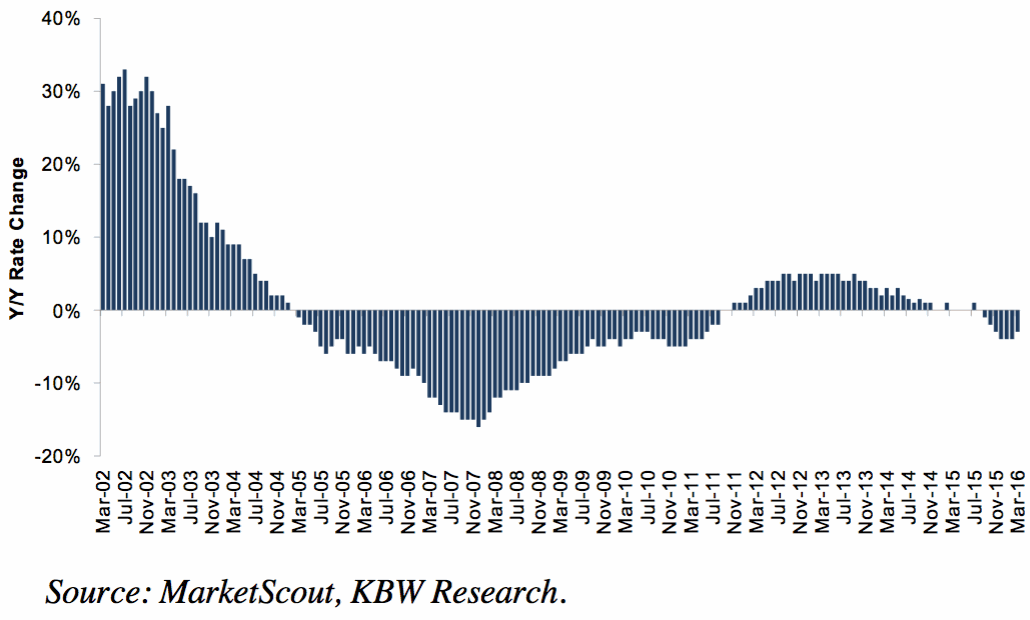 “Rate changes have remained negative since September 2015, and while the slowdown decelerated a little in March versus February, we doubt the modest sequential deceleration will persist.

Broken down by account size MarketScout reveals that jumbo (over $1 million) sized accounts remained unchanged during March and was down by an average of 4%.

Small (up to $25,000) sized accounts’ rate movements also improved slightly in the month, averaging -3% compared with -4% in February, reports MarketScout.

MarketScout also provides a breakdown of U.S. commercial P&C rate movements by coverage class during March, revealing that as in February, all business lines saw rates decline in the month with the exception of EPLI and Crime, which remained flat.

As in February commercial property saw the steepest negative rate movement during the month out of all coverage classes, declining by an average 4%, so a slight improvement on the -5% movement seen last month.

All other business classes were down on average by between 1% and 3% during the month of March.