Typhoon Nangka is heading for a landfall later this week in Japan (late Thursday), with a recent forecast suggesting that the storm could maintain Category 2 strength at that point, putting insurance and reinsurance contracts at risk, as well as the Aozora Re and Akibare II catastrophe bonds.

The latest update from the JTWC at 10.00am BST on 15th July shows Typhoon Nangka located directly south of Japan, with sustained winds of nearly 98mph and gusts of 120mph or higher. Nangka remains a Category 2 typhoon but the forecast still gives a chance of some reintensification as it makes the steady journey north, but the forecast currently calls for landfall as a strong Category 1 storm.

A landfall is expected late Thursday evening along the Japanese southern coast in Shikoku region, with the forecast suggesting a strong Category 1 storm which will be weakening. Current SST’s close to Japan are below the level needed to maintain tropical storm strength for long. However the angle of approach and size of typhoon Nangka still makes this a dangerous typhoon.

Despite forecast weakening, Typhoon Nangka will still remain a threat, with its intensity at landfall likely to make a big difference in terms of eventual losses to the insurance and reinsurance industry, or indeed the exposure to the two catastrophe bonds. Given the updated forecast for a lower intensity storm, the cat bonds continue to appear safe for now. 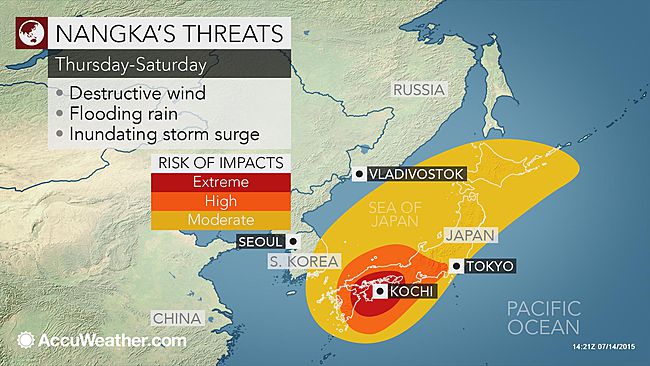 Meteorologists continue to highlight the storm surge threat from Nangka as potentially severe, with the direct approach of the storm likely to exacerbate the surge height. Typhoon’s more typically curve as they reach Japan, running up the coastline, but Nangka looks set to directly attack the coast which will push up a bigger surge.

The current forecast storm surge for an area directly in Nangka’s path is 1.7m, according to the Global Disaster Alert & Coordination System. That number may rise as the typhoon approaches, but combining the storm surge with a high tide and torrential rainfall could lead to a severe coastal flooding threat.

Accuweather also explained the threat to the landfall area of Shikoku and Kyushu, and more broadly to Tokyo and other regions, in an update in the early hours of Wednesday 15th July:

Latest indications point toward Shikoku facing a direct landfall by Nangka, whose strength at that time will likely be equal to that of a Category 2 or minimal Category 3 hurricane in the Atlantic or eastern Pacific (maximum sustained winds of 155-190 kph or 95-120 mph).

Prior to landfall, rain will increase across Japan Wednesday night and Thursday with the worst conditions closer to the site of Nangka’s landfall.

Shikoku and neighboring parts of Kyushu and southern Honshu face Nangka’s destructive winds, flooding rain and an inundating storm surge later this week. Residents should be taking the necessary precautions now, including heeding evacuation orders, to protect lives and property.

Oita, Kochi, Okayama and Osaka are among the cities in the path of Nangka’s fury.

“Storm surge will be a serious problem with Nangka with the surge potentially funneling into the Kii Channel and even the Osaka Bay, threatening to flood coastal portions of the Kii Peninsula severely,” Duffey warned.

The greatest storm surge will be near and east of where Nangka makes landfall.

In addition to the storm surge, extremely rough surf will build along the southern coast of Japan later this week, threatening to significantly impact shipping and create life-threatening conditions for anyone who attempts to enter the water.

While conditions will be worse to the south, surf will also build across the Sea of Japan later this week and lead to coastal flooding along the northern coast of western Honshu.

Nangka threatens to unleash between 150 and 300 mm (6 and 12 inches) of rain in and around Shikoku. Duffey is concerned for significantly higher amounts in localized areas, especially in the mountainous terrain. That amount of rain is sure to trigger life-threatening flash flooding and mudslides.

The threat of heavy rain and localized flooding will extend well away from where Nangka comes onshore.

The Greater Tokyo Area could receive more than 50 mm (2 inches) in 12-24 hours, as a heavy rain band sets up across eastern Honshu later Wednesday night into Thursday.

Impacts from Nangka will not be limited to just Japan. Outer rain bands and strong wind gusts could graze southeastern South Korea as Nangka begins to curve to the northeast. Coastal flooding may also become a concern.

These two bonds have quite different structures making them difficult to compare. Akibare II uses a modelled loss trigger, based on actual parameters of the storm which are run through a post event loss calculation process to define an event percentage. The Akibare II cat bond covers both wind and flood losses from typhoon’s as well.

In terms of risk profile, Akibare II has an initial expected loss of 1.05% and an initial attachment probability of 1.71%. Most of the exposure is concentrated around Tokyo and Kanagawa, however there is a concentration of exposure in Fukuoka, on Kyushu island which may be more in the Nangka’s path.

The Aozora Re cat bond is a relatively remote risk cat bond, with an initial attachment probability of 0.57% and expected loss of 0.52%. As a result this cat bond would require a very large and powerful typhoon to be at risk of being triggered.

Looking at historical risk modelling for the two bonds, there is only one historical typhoon in risk modeller AIR Worldwide’s catalog that would have caused the Akibare II cat bond to be triggered. 1959’s typhoon Vera would have resulted in an event percentage of 7%, so a small loss to investors.

There have not been any typhoon events since 1947 that would have generated sufficient losses to reach the attachment point for Aozora Re meanwhile. Even 1959′s typhoon Vera, which had the highest estimated ultimate net loss of ¥286.5 billion, would need to have resulted in nearly 79% more losses to reach the initial attachment level, or a 34% increase if the Aozora attachment had been adjusted to the maximum under a variable reset.

So, if typhoon Nangka is, as forecast, a Category 3 or lower storm and makes landfall away from the Tokyo and Kanagawa prefectures where the exposure is always highest, it would appear that neither of these exposed catastrophe bonds would face any losses.

Commenting on the current forecast which would take typhoon Nangka towards a landfall on the northern side of Kyushu, the southern of the main Japanese islands, Schmelzer said; “The contribution to expected loss from Kyushu is smaller in Akibare than in Aozora, which means that the risk of suffering a loss from storms hitting Kyushu is very similar in the two transactions. Based on the forecast information currently available and the comparison with historical events, we think that losses to investors are unlikely.”

Commenting specifically on the possibility of loss to both of the bonds, Schmelzer explained; “For Aozora, the loss contribution from storms below cat 4 is less than 10%. The losses will of course depend heavily on the path of the storm. Nangka is forecast to hit the Kyushu island, which is a major contributor to the Expected Loss, mainly because of the higher frequency of storms there and not because of the exposure, which is less than 10%. In Kyushu, the prefectures of Nagasaki and Kagoshima represent the highest risk. Nangka is currently forecast to miss Nagasaki and Kagoshima is on the border of the forecast cone. If the storm stays on the forecasted track, it will go into the strait between Kyushu and Shikoku. The bordering prefectures have only a limited contribution to expected loss.

“Akibare is a riskier transaction with a significantly higher contribution to expected loss from cat 1-3 storms. I have looked at a few historical storms (Mireille, Songda, Nancy and Chaba). The tracks Nancy and Chaba are looking reasonably similar to Nangka. Both storms would not have caused a loss to the note. Exposure is more concentrated in areas that are outside of the forecast cone of Nangka.”

Other ILS investors and catastrophe bond fund managers Artemis has spoken with today also expect the two cat bonds to be safe, based on the current forecast. However it is worth noting that should Nangka re-intensify to a Category 4 storm and maintain such strength up to landfall, then the potential impact and eventual insurance and reinsurance industry losses could be significantly greater and these cat bonds could come into play.

At the current forecast typhoon Nangka is more likely to be an insurance event, with the potential for some reinsurance industry losses as well. Given the ILS markets increasing expansion into collateralized reinsurance and the growth of vehicles such as sidecars, there is always the possibility for a storm of this size to cause some impact to ILS funds. However any impact to ILS funds collateralized positions would be expected to be minimal, based on the current forecasts.

For Nangka to have a major impact on the insurance and reinsurance industry it would need to maintain its strength up to landfall and also for the track to adjust further towards Tokyo and Kanagawa. That would bring the areas of Japan with the highest exposure concentrations into play and also make storm surge a considerable threat.

We’ll update you as typhoon Nangka proceeds towards Japan over the coming days and you can track the storm’s progress using these tracking map further up this article and the interactive wind field map below.