Tropical storm Cindy was named yesterday, as the third official storm of the 2017 Atlantic Tropical Storm & Hurricane Season, and has intensified to now carry 60mph sustained winds with torrential rainfall and flash flooding now a threat across areas of the U.S. Gulf Coast.

Tropical storm Cindy formed out of potential tropical cyclone three, or invest 93L, yesterday and at the time was not expected to intensify much before it made landfall. But insurance and reinsurance interests may want to take note, as Cindy does present a threat even at this early stage of the tropical season.

But tropical storm Cindy defied those forecasts and is now packing 60mph sustained winds, with higher gusts, with only slight weakening now anticipated before a landfall somewhere around the Texas, Louisiana state border on Thursday morning.

Update 09:30 BST 22nd June: Cindy has made landfall with 45mph sustained winds, but the rainfall threat has increased and forecasts suggest a possibility of isolated downpours resulting in amounts of up to 15 inches along the track. 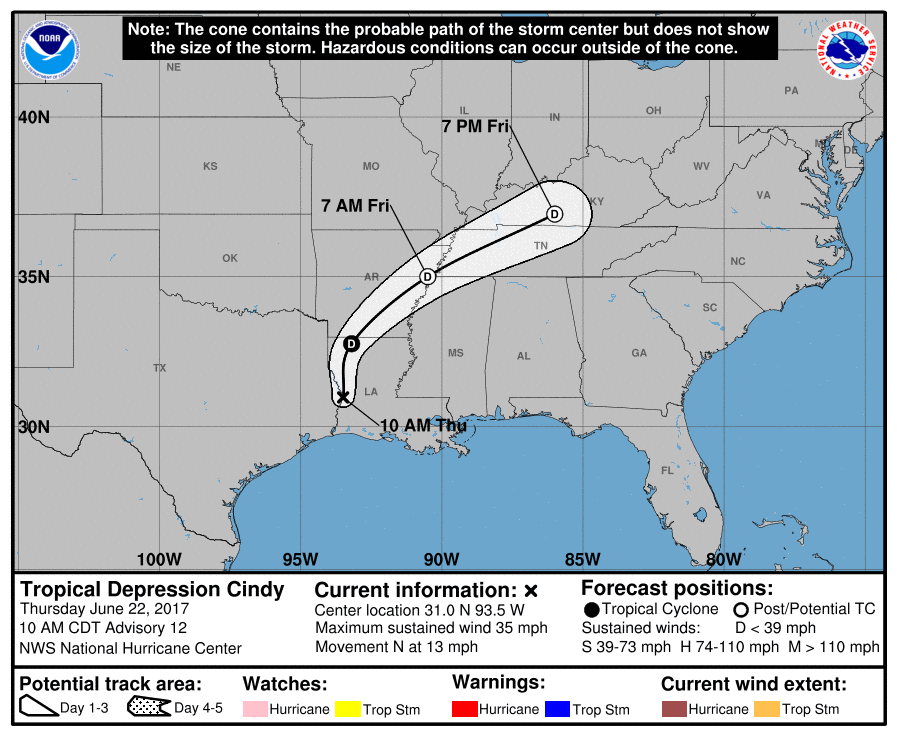 Rainfall is expected to be the major risk from tropical storm Cindy, with the potential for life-threatening flash flooding warned across some areas of the northern Gulf Coast by NOAA.

Tropical storm force winds extend outwards up to 275 miles from the center of tropical storm Cindy, as the storm has now quite a large footprint which heightens the risk for insurance and reinsurance assets exposed.

NOAA’s latest forecast warns of possible rainfall accumulations of 6 to 9 inches, with isolated totals of 12 inches possible, over southeastern Louisiana, southern Mississippi, southern Alabama, and the Florida Panhandle through Thursday. This torrential downpour could result in “life-threatening flash flooding in these areas” NOAA says.

More widely, rainfall totals of 3 to 6 inches can be expected across much of the Gulf Coast region, as well as inland along the tropical storm’s track.

Additionally, a storm surge inundation of as much as 1 to 3 feet above ground level is anticipated along the coast in areas affected by the storm, with the possibility of a surge of up to 4 feet in certain isolated areas.

Tornadoes are also a threat along the track of tropical storm Cindy.

A strong tropical storm carrying torrential rainfall, threatening some coastal surge flooding and tornadoes, does have the potential to be an event of note for insurance and reinsurance interests, particularly if the area of landfall was urbanised, or the surge hit a coastal town.

As a result re/insurers should be on watch for tropical storm Cindy as it approaches the coast over the next 24 hours.