For just the third time since records began, a triple dip La Niña has been declared by the Australian Bureau of Meteorology (BOM), with impacts including above-average rainfall anticipated for some regions of the world. 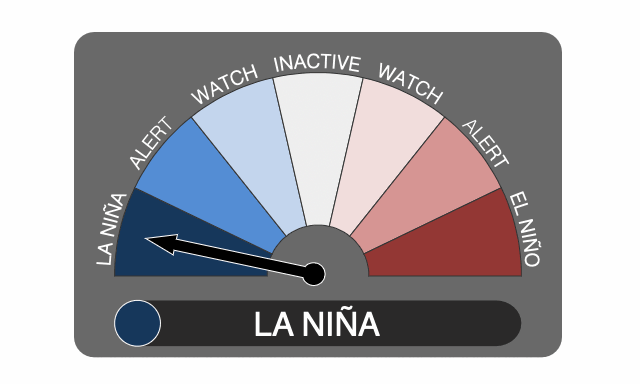 Dr Andrew Watkins, BOM’s ead of long-range forecasts, said the three-month climate outlook shows a high chance of above average rainfall for most of the eastern half of the Australian mainland and eastern Tasmania.

These are areas heavily impacted by flooding through recent years, including the costly Australian floods of early 2022 that resulted in significant insurance and reinsurance market losses.

“When this change in the atmosphere combines with changes in ocean temperature, it can influence global weather patterns and climate, including increasing rainfall over large parts of Australia,” he explained.

Watkins also said that while La Niña criteria have been met for the third time in a row, most models forecast the new event to be weak to moderate in strength, with the peak likely to be during spring and then conditions ease back during the Australian summer.

“La Niña is not the only driver influencing this wet outlook. To our west, a significant negative Indian Ocean Dipole (IOD) event is underway. We expect the IOD influence will reduce in late spring or early summer,” Dr Watkins added.

“The Southern Annular Mode (SAM) is also in a positive phase, and likely to remain positive into summer. Positive SAM during summer pushes weather systems south, which increases the chance of rain in New South Wales, eastern Victoria and southern parts of Queensland,” he also explained.

These La Niña climate influences are said to push Australia’s climate towards a wetter phase, with the outlook from BOM being for an 80 per cent chance of above average rainfall for many parts of the eastern half of Australia.

For Australia, La Niña could also suppress bushfire potential to a degree, if rains keep the ground wetter than normal.

Of course La Niña has ramifications for many other parts of the world, where it could be wetter than normal, or weather patterns be adversely affected.

Australia’s Bureau of Meteorology (BOM) has often been the first to declare the occurrence of one of the three phases under the El Niño-Southern Oscillation (ENSO), either El Niño when the Pacific warms, La Niña when it cools, or neutral.

Both El Niño and La Niña conditions have ramifications for global meteorological conditions and can cause weather phenomena in different parts of the world, from heavier than normal rainfall, to drought, to influencing hurricane season conditions.

La Niña has been cited as a factor for a busier hurricane season, however that has not come to pass so far in 2022.

It’s always very hard to predict how a La Nina event will pan out, in respect to weather conditions globally, but it’s generally considered that for Australia it can reduce bushfire risk through cooler temperatures and more rain, but increase the frequency of some storms, perhaps convective weather and tropical cyclones.

La Niña can also drive drought conditions in the southern US states, which may exacerbate wildfire conditions over the coming months.

While for northern Europe it can result in a wetter than normal winter period, but Mediterranean regions and the Middle East can see drier conditions.

Africa and Asia can also see different weather patterns, with more rainfall in certain parts but a higher likelihood of drought in others.