Trapped ILS collateral shrinks in 2019, as losses begin to crystalise

The amount of insurance-linked securities (ILS) and collateralised reinsurance collateral trapped after the 2017 and 2018 catastrophe losses has begun to shrink in 2019, with the overall amount trapped having declined by as much as 10% since its peak, estimates show.

After the 2017 hurricanes and wildfires the amount of trapped collateral from the ILS and alternative reinsurance market rose steadily, as increasing numbers of cedants elected to hold collateral as their losses rose and buffer table calculations came into play.

When the 2018 catastrophe loss year really started to hurt the sector it was late in the year, after typhoon Jebi losses began to creep and the second year of California wildfires struck.

At the end of last year estimates for how much ILS and collateralised reinsurance market collateral was trapped or impaired ranged from around $18 billion to as much as $25 billion.

At the January 1st reinsurance renewals this year, broker JLT said it believed as much as $20 billion remained trapped at that time.

Rating agency A.M. Best put an estimate out that approximately 20% of 2018 ILS capital was still trapped in funds and other structures following the impacts of losses at the beginning of this year.

While by the end of the first quarter of 2019, broker Aon said that it believed trapped collateral had fallen to just $15 billion, which would have amounted to roughly 16% of the ILS market’s available collateral.

Now, rating agency A.M. Best has put some additional light on the subject, adding more detail and saying that it believes that while 20% to 25% of ILS collateral was trapped at the end of 2018, that percentage has now fallen to just 15% of ILS collateral in a forecast for 2019.

Based on ILS and third-party reinsurance capital amounting to $92 billion, forecast for 2019 according to figures from A.M. Best and broker Guy Carpenter, the 15% that remained trapped at that time amounted to roughly $13.8 billion. 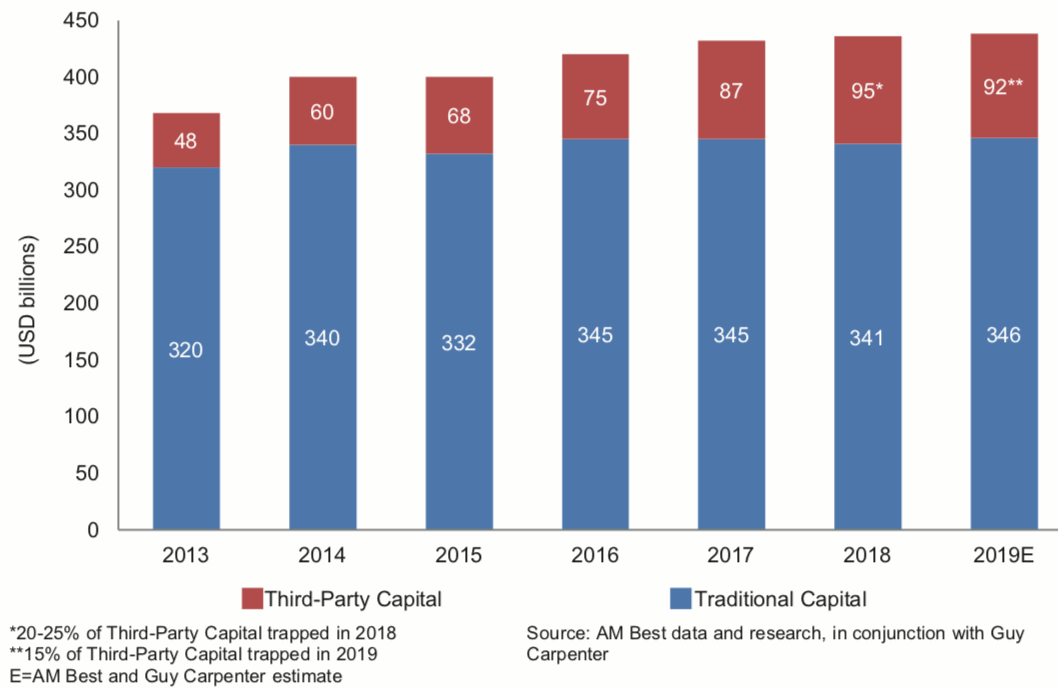 So, we’re seeing a steady decline in the volume of ILS collateral still trapped due to prior year loss events, which is encouraging as the percentage and dollar amount trapped should continue to decline, with some going to pay claims due while the rest can flow back to ILS fund managers and ILS investors.

This process should also pick up pace in the months to come, as loss estimates become increasingly certain for prior year catastrophe events.

All of which means that the ILS and collateralised reinsurance market should have more of its firepower back available to it in time for the January 2020 renewal season, just as long as there aren’t further major losses to trap a significant amount more.

A.M. Best and Guy Carpenter noted that at the end of 2018 the collateralised reinsurance market amounted to roughly $56 billion out of a $95 billion ILS market. The overall market shrank slightly to $92 billion by the middle of this year, largely due to loss payments and redemptions.

Trapped collateral can cause as much as a 20% drag on ILS investment strategies, A.M. Best explained, “owing to the opportunity cost of investors’ collateral tied-up in expired contracts.”

“The drag on investment returns from locked-up collateral can run as high as 20%. As a result, the impact of trapped capital is becoming a more important consideration in the risk pricing of collateralized reinsurance contracts,” A.M. Best said.

This is important, as it signifies ILS managers seeking greater compensation where there is a risk of collateral lock-up, which ultimately should result in terms becoming more balanced, rather than being one-sided in favour of cedants, as they have been at times in the ILS market’s history.

While the cedant must be able to protect its interests, in terms of an ability to claim. It should not be at the expense of investors ability to trade and buffer table conditions and clauses need to be fair.

This is also something that has driven greater pricing differentiations, as ILS managers want to ensure they are not unduly exposed to loss creep because of a cedants poor historical performance.

The experience gained through 2017 and 2018 should stand the ILS market in better stead moving forwards, as for some it was their first real experience of collateral trapping en masse and has given all sides of the market a better understanding of what works well and also what is equitable and fair.

As collateral is released, the ILS market will return to its normal functioning amount of capacity for deployment, which will also please clients as there will be more capacity available for them come January.

All of which suggests that along with any inflows and start-ups, we should return to ILS market growth around the January 2020 renewals, or soon after into next year (fresh catastrophe losses allowing).